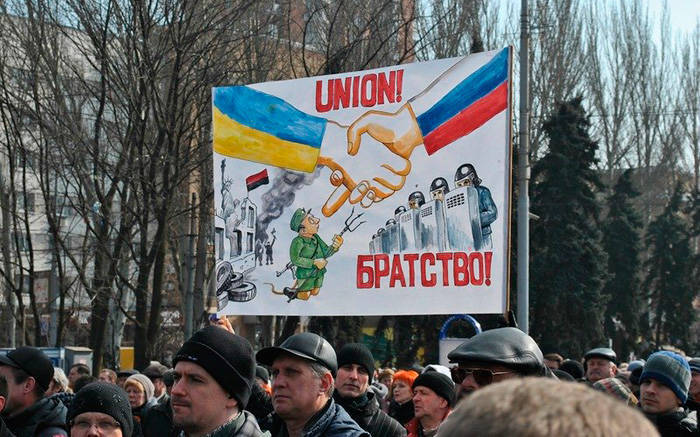 Ukrainian politicians and journalists of nationalist views, and after them the mass of ordinary citizens who supported the Maidan, love to glue on their opponents the labels of “Ukrainophobes”, “Ukrainians” and haters of “everything Ukrainian”. A striking description of this unpretentious propaganda reception was given by another Bulgakov professor Preobrazhensky in his famous speech on the "counter-revolution".

In fact, all our imaginary "Ukrainophobia" stems only from a sincere lively interest in stories and the culture of Ukraine, and those who take the caricature sharovary or exotic Bandera for Ukraine as a genuine hostility are experiencing a strong hostility to us.

The archetypes of the Ukrainian revolt

Here, for example, such a vivid episode of national history as Koliivshchyna is an uprising of Cossacks and peasants in the Polish lands of Ukraine in the middle of the 18th century. Which of the citizens of famous views does not identify with its heroes? At the start of the election campaign to the Verkhovna Rada of Ukraine in 2012, opposition candidates, priests of the non-canonical UOC of the Kiev Patriarchate and representatives of the national intelligentsia even conducted a ritual of consecrating knives in Kholodny Yar (Cherkasy region), sung by Taras Shevchenko in the poem “Gaydamaky”. And in Odessa, one of the most comical characters of the local Euromaidan - the lord by the name of Gutsalyuk - calls himself nothing more than “the ataman of the Black Sea Haidamak association”.

And now let's put aside sharovarshchina with mashingver inappropriate in Naddnipryanskaya Ukraine. What will we see? The uprising begins with the fact that the Zaporozhyan Cossack Zaliznyak drives around cities and towns and swings the “golden certificate” of Catherine Catherine, seeing that the then “quilted jackets” and “titushki” clutch at the knives. I suddenly remembered this episode when I read on Facebook the status of a well-known Moscow journalist Dmitry Olshansky that Russians, unlike Ukrainians without a state, do not cope well with their problems. They say that an uprising in Sevastopol without “polite people” would have drowned out just like an uprising in Donetsk.

“It’s ridiculous and sad,” writes Olshansky, “that in Ukraine our government is hindered by exactly the quality of the Russian people that helps it in Russia so much. Russians are not enough buzzing. Not because they feel good (...). But because there is no ORDER. As the Okhotorniy butcher said to Nikolai Pavlovich in 1848: you, sir, only order us, and we will arrange such a revolution for you, which is a pleasure. ”

So, in 1768, in order to raise a revolt, Zaliznyak falsified such an order! Imagine, it is all the same as if Pavel Gubarev, the current Ukrainian political prisoner No. XXUMX, read the order of the President of the Russian Federation on Donetsk Square: “Rise up and go and take power!”. From the point of view of the current “Haydamak”, the real Haydamak Zaliznyak is a traitor and a collaborator who, at a difficult moment for the country, entered the square under the flag of an “aggressive neighbor”. And then what happened? Against the traitor and the separatist Zaliznyak, a detachment of the “National Guard” led by Gonta was sent, so to speak, “to restore order”. What did he do instead? That's right, changed the oath! Traitor and disgrace of the armed forces of Ukraine! Shame!

Further more. Catherine eventually led the troops under the slogan of protecting the humanitarian rights of fellow believers. An occupation! Moreover, if we swapped "here" and "then", then an unbreakable wall of Poles, besieged in Umani by Jews and Haidamaks, who knew what they were doing with the first two categories of citizens, would have to stand against the Russian army. But in the XVIII century there was still no Kiev media, so in reality everything turned out quite the opposite. Even the Haidamaks, who started this whole thing, could not stand up to the regular European-style army that only Russia had at that time in this part of Europe.

This whole story, our homeland history, is a direct analogy to the current return of the Crimea, and not at all the Anschluss and the Munich Agreement. Just to make this obvious conclusion, you need at least a little bit of this very native story to know and love.

And what a ground for analogies gives another key episode of Ukrainian national history - Khmelnichchina! Bogdan-Zinoviy Khmelnitsky is just a “level 80 separatist”! Even the accession of Galicia by the Soviet Union in 1939 lies within the framework of the same historical logic, when the Ukrainian population of “similar Kresy”, exhausted by polonization and pacification, optimistically welcomed the Soviet Tanks.

The main nerve of Ukrainian history is that every time the humanitarian, political and social pressure of the West ends with a surge of popular anger and the arrival of more or less polite, but always well-armed people from the north-east. And as a result, the territory captured by the uprising is fully or partially part of Russia. That is why the real historical heirs of the Khmelnitsky and Koliivschina are not self-styled costumed clowns, but the current popular uprising of the Ukrainian Southeast, which has already been called the “Russian Spring”.

Ctrl Enter
Noticed oshЫbku Highlight text and press. Ctrl + Enter
We are
On the other side of the “red” and “white”. Izborsk Club ReportMalorussky project: on the solution of the Ukrainian-Russian national issue
Military Reviewin Yandex News
Military Reviewin Google News
67 comments
Information
Dear reader, to leave comments on the publication, you must sign in.