Nikolay Nikiforov: “The Ministry is actively involved in the development of a system approach for informatization of defense enterprises” 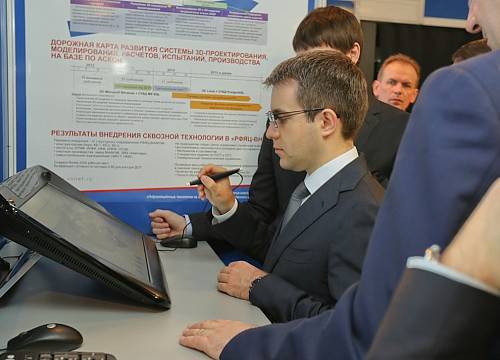 Sarov, April 15 2014. - Nikolay Nikiforov, Minister of Communications and Mass Communications of the Russian Federation, took part in the Information Technologies in the Service of Russia's Defense Industrial Complex conference held at the Russian Federal Nuclear Center All-Russian Research Institute of Experimental Physics. The head of the department spoke about the main tasks of the ministry in terms of informatization of the defense-industrial complex (DIC) and examined the exhibition exposition of the developments of the institute and domestic IT companies.

The Ministry of Communications and Mass Media of the Russian Federation pays considerable attention to ICT informatization, since it has a significant impact on the security and development of the IT industry in general. Plans for the implementation of informatization are presented in the Ministry of Information Technology Development Strategy in the Russian Federation for 2014 – 2020 years and for the future up to 2025 of the year, which was approved by the Government of the Russian Federation last November. In particular, the “roadmap” of the strategy involves long-term research to form a scientific and technical reserve, stimulating the production of domestic products, as well as using state-owned supercomputer facilities, including the creation of new industrial designs.

A special place is occupied by the import substitution program for defense enterprises. Its creation is entrusted to the government by the Ministry of Industry and Trade and the Ministry of Communications and Mass Media of Russia. The deadline for solving these tasks is the fourth quarter of 2014. The main objective of the import substitution program is to ensure the security of automated control systems for military and special purposes, as well as industrial and technological processes.

“We agree with the assessment that the current situation makes the launch of an import substitution program absolutely necessary,” Nikolai Nikiforov said. - Taking into account a number of relatively new factors, there is an obvious need to create a full-fledged “map of Russian information and communication technologies."

“It is important to take into account the entire structure of hardware, software components and their decomposition for various modules. In addition, it is necessary to determine the critical elements for which breakthroughs and long-term research are needed. In the process of developing new missing products, it is necessary to ensure the creation of products not on a local scale, but on products that are internationally competitive, ”said Nikolay Nikiforov.

According to the minister, currently a number of countries are interested in Russia's leadership in their local information and communication technology markets: “These are rather big states with huge markets that we have to take into account. Today we are working out the possibility of the presence of our companies. We have developments that in 1-2 of the year can be brought to a competitive level. There are projects to create domestic hardware elements, such as microprocessors. Experts agree that in about 5 years it is possible to develop a number of platform solutions - including an operating system for mobile devices. ”

Nikolay Nikiforov also reminded that the Ministry, along with other departments, is actively involved in the development of a system approach to informatization of defense enterprises and the application of IT in the creation of new weapons and military equipment.

At the end of the speech, the Minister expressed hope for a constructive discussion and for concrete proposals that should be taken into account in the work of both the DIC and the government as a whole.

"The conference is able to give a serious impetus to the development of IT in the military-industrial complex and the impetus of the entire industry in order to become a serious player at the expense of domestic products and access to new markets," he concluded.