Participants in the protest in Kiev after the meeting on the Maidan approached the Verkhovna Rada. They demanded the resignation of the Minister of Internal Affairs of Ukraine Arsen Avakov. Activists burn tires and seek decisive action from the country's leadership. 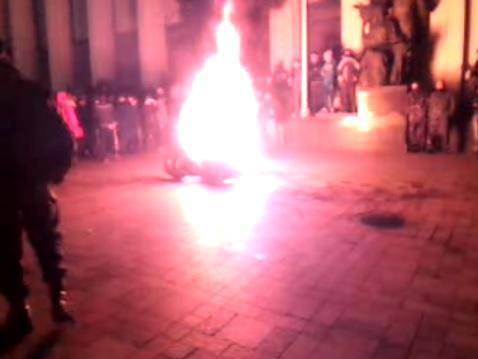 The protest was preceded by a rally on the Maidan. On the stage were the supporters of unitary Ukraine, who came from Mariupol. The rally was initiated by a presidential candidate. Ukraine Anatoly Gritsenko and Maidan centurion Vladimir Parasyuk.

After the rally, the most active participants in the protest lined up and moved towards the Verkhovna Rada. In their hands they held tires.

Some of the rally participants demanded the resignation of Arsen Avakov and Alexander Turchinov, and also chanted chants of football fans.

Protesters demanded that they come to him. Interior Minister Arsen Avakov and acting President of Ukraine Alexander Turchinov. The Ukrainian authorities did not send a representative to negotiate with the protesters and they stood outside the walls of the Verkhovna Rada shouting anti-government slogans.

The participants of the protest expressed their intention to meet in Kiev again at 9 in the morning on Tuesday 15 of April.

Ctrl Enter
Noticed oshЫbku Highlight text and press. Ctrl + Enter
We are
Protesters in Kiev are driving Verkhovna Rada deputies back to the building"Right Sector" stormed the building of Parliament
Military Reviewin Yandex News
Military Reviewin Google News
30 comments
Information
Dear reader, to leave comments on the publication, you must sign in.