"The world is on the threshold of tectonic shifts" 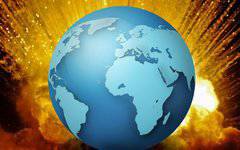 The situation resembles the one that developed between the First and Second World Wars.


The threat of sanctions from the West extremely sharply raised before Russia the question of state sovereignty. At the authority level, Russia finally comes to the understanding that sovereignty is not limited to the ability of the authorities to rule at their own discretion.

The de facto established financial dictates of the West

The sovereignty of the state is based on many factor components. We list the most important of them:

One of the important components of state sovereignty in modern conditions of development of money circulation is the sovereignty of the payment system. The task of sovereignizing the payment system of Russia in the shortest possible time has already been formulated. There is opposition in relation to the cost of this transition, but the very direction of discourse suggests that sovereignization is thought so far in fairly moderate forms. Price costs are measured in dollars and euros, moreover, that the source of non-sovereignty of the financial sphere and is tied to the monetary system of the West.

We live financially in the era of the Jamaican model. Its ideology is the absence of a single universal equivalent of value, which has historically been gold. The real price on the world market is determined by a floating exchange rate ratio. It would seem fair market competition law. However, the world's reserve currencies - less than a dozen. Dollars and euros collectively occupy 85,4% of world currency reserves. The de facto established financial dictates of the West.

The gold market in the modern world is monopolized

Exit from the dollar - the euro is fraught with the use of various methods of pressure, including military. While money with new, non-gold rules for financial formation can be emitted in any amount, the mechanism of global parasitism is implemented. The world emitters of the world issue almost worthless paper, receiving for it physically real benefits from other states.

The principal question of the current agenda is whether semi-periphery countries will be able to create their own sovereign geo-financial systems. The formation of regional reserve currencies is already being declared by Russia - the ruble zone, and China - the yuan zone, and a number of Islamic countries - the Gulf dinar zone. Suppose that such regional systems are actually built. But then the question arises - through which of the currencies will the commodity turnover between sovereign geo-financial systems be conducted.

Consider the case of "Russia - China." The choice in favor of any of the currencies - ruble or yuan - can only mean a new version of de-sovereignty. Return, as many experts advise, to gold? The scenario of such a transition on a global scale is discussed. But when assessing this perspective, we must bear in mind that the gold market is monopolized in the modern world. The main actor in it is the Rothschild clan and related groups. Course on the gold standard - Rothschild course. His victory will mean nothing more than actor reconfiguration in the system of global parasitism, not canceling its very essence.

There is a stalemate. Any of the monetary system reconfiguration scenarios will be associated with de-sovereignty in relation to the world center.

The Challenge of the Communist Alternative

A way out of the impasse is seen in changing the paradigm itself. Do not look for ways to optimize the cash settlement system, but raise the question of abandoning the very idea of ​​money. Let me remind you that this was precisely the challenge of the communist alternative. This concept was not limited to the time of writing the Communist Party Manifesto.

The stratagem of the transition to cashless circulation retained its relevance as early as the Late Stalin years. It was developed directly by the “father of nations”, which, according to one version, was the reason for his murder. The parasitic chain "money - goods - money" was, according to Marx, programmed by the evolution of the system "goods - money - goods".

The emergence of money was key historical the moment of the genesis of world parasitism. Accordingly, a return to a new level of development to the “product-product” system seemed a practical way out. The fact that such relations are possible is partly evidenced by the CMEA experience. Part of the commodity circulation between the countries of the socialist camp was carried out in the format of barter exchange.

The world today is on the threshold of tectonic shifts. The situation resembles the one that developed between the two world wars. The model of the Jamaican system had historical analogies. After the victory of the Entente in the First World War, instead of the gold parity, the regime of floating controlled exchange rates was established. Universal reserve currencies have become the dollar and pound sterling. Established the de facto financial hegemony of the Anglo-Saxon world.

However, the global crisis and the emergence of geopolitical actors challenging Anglo-Saxon hegemonism in the 1930s led to the collapse of the established system. And then - the Second World War, Bretton Woods and the establishment of the principle "dollar - gold" as the basis of international money circulation.

Will the new financial transition involve comparable geopolitical upheavals? The likelihood of such a scenario, as shown by the events, increases.

Ctrl Enter
Noticed oshЫbku Highlight text and press. Ctrl + Enter
We are
Financial and Economic Desuverization of RussiaVladimir Churov: On Observance of Citizens' Rights in the USA
Military Reviewin Yandex News
Military Reviewin Google News
100 comments
Information
Dear reader, to leave comments on the publication, you must sign in.