April 12 2014
192
This week, a lot of noise was made by the publication in the Moskovsky Komsomolets, entitled by the authors “There was not a single ruble, but suddenly Altyn”. The publication, citing some unnamed sources, reported that by about 2025, a single currency would finally emerge in the countries of the Customs Union, the working title of which is “Altyn”. At the same time, the same unnamed source “MK” reports that allegedly the authorities of the three states of the Customs Union (Russia, Belarus and Kazakhstan) have already approved the introduction of this currency, however, the quote: “unofficially”.


After the article in Moskovsky Komsomolets, other publications decided to practice who would guess when exactly in the turnover of Russia, Kazakhstan and Belarus (as well as, possibly, other states intending to join the Customs Union) a single currency will appear in the form of altyn. In particular, LifeNews publishes a material stating that the introduction of this currency within the CU will take place over the next five years, which is associated with the possible use of tough economic sanctions against Russia by a number of foreign countries. Up to the same dates, the introduction of altyn is narrowed down by the “MK” itself.

It should be recalled that starting next year, the Russian Federation, the Republic of Belarus and Kazakhstan will be integrated into the Eurasian Economic Union, whose main functional base is the unity of the economic space. For obvious reasons, deep integration sooner or later should have led to the raising of the issue of introducing a single currency (as happened, for example, in the European Union at the time). Talk about the need to introduce the single currency of the EEU (Eurasian Economic Union) is not started today. The possibility of introducing a single monetary unit was discussed not only in the fields of the Customs Union, but also within the framework of the Union State of Russia and Belarus, which, by the way, has been mentioned much less often in recent years than about the CU. 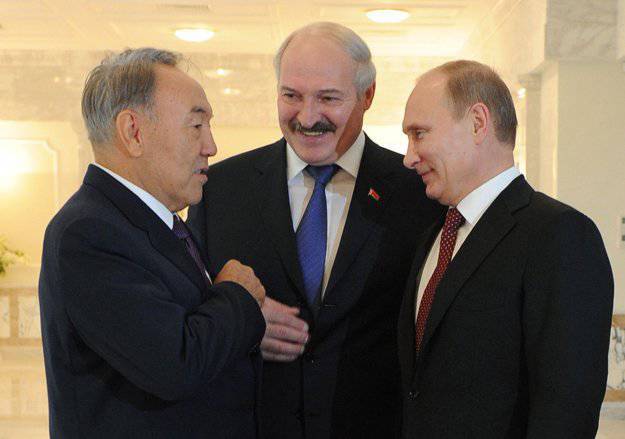 So far, all the talk about creating a single currency for the countries of the Customs Union (since 2015 of the year - the EAEU countries) has remained talk. The main reason for friction and disagreement is that the introduction of a single currency should not put anyone's economy in the status of dependence on the issuing center, controlled solely by one side. Belarusian and Kazakhstani authorities express the idea of ​​opening emission centers in their territories so that each state of the Eurasian Economic Union has its own emission center. It would seem that everything is fair and objective, except for one “but”. The fact is that the union, if you pay attention to its naming economic, and, therefore, its arrangement must be conducted on economic laws. If these economic laws are at the forefront, then it is difficult to talk about the triple nature of emission centers in the EAEU because the economies of the three countries differ too much in their volume.

So economically, the Belarusian economy today is only the thirtieth part of the Russian economy, and the economy of Kazakhstan - a tenth of the Russian. These indicators also bring the main difficulty of the introduction of three equal emission centers today for all to see. After all, this is exactly the case when three, at least, no better than one - the inconsistency of monetary policy, the desire to pull the blanket over themselves, even without sufficient economic, let's say, power, can bring dissonance to the work of the EAEU. But with three different currencies such dissonance can be even more impressive.

For obvious reasons, Moscow wants to get the right to a single center of emissions in the EAEU on its territory - due to the fact that the Russian economy has large volumes. But economics is an economy, and in fact we all understand perfectly well that any union formation is not only an economy, even if the term “economic” is highlighted in its name. In any case, there will be political issues. They arise today. Neither Astana, nor Minsk, proceeding from their own interests, want to lose the levers of economic management, trusting them exclusively to Moscow. And you can understand them - the states are still independent.

How to be in this situation? Make out the Belarusian and Kazakh economies to the Russian level, and then introduce three emission centers on the basis of a single currency - let it be altyn? Well, it’s just objectively impossible, because finishing 3% to 100% is something from the “Away from a Fairy Tale” series. Yes, this is not necessary. Then refuse to use the single currency - to trade, how to trade, losing billions of rubles or tenge on exchange transactions? It is also not an option, if only because the money saved on exchange losses could be channeled to a much more favorable course for the CU (EAEU). So what are Russian, Belarusian and Kazakh economists ready to undertake?

Judging by the information provided by the Chairman of the Eurasian Economic College, Viktor Khristenko, the solution has not yet been found. Arguing about publications about the introduction of the Russian-Belarusian-Kazakh Altyn almost in the next 5 years, Khristenko noted (RIA News):
There is no such item on the agenda. Officially there are no such offers. This is still at the level of poetry, probably, than at the level of real life. There is no question of a single currency.

If Khristenko voiced the official position, then it turns out that the publication of the Moskovsky Komsomolets was sucked from the finger. Well, or Khristenko still does not finish speaking ...

So, the official representative of the Eurasian Collegium actually refuted that the talk about the introduction of a single supranational currency within the CU today. So, our states will continue to suffer losses in mutual trade, forced to exchange one currency for another? If so, then this, to put it mildly, is not the most constructive position, which calls into question the very effectiveness of the creation of the Eurasian Economic Union. So that the effectiveness of this kind of integration does not rush to zero over time, it’s necessary to introduce a single currency. And to come to a consensus, on this issue clearly need to work now.

One of the options proposed by the experts is the creation of the Eurasian Central Bank (ETSB), which will be implemented by the representation of these parties, which are satisfied with all aspects of the integration. This does not mean at all that the representation will be associated with a rigid ratio of economies (that is, approximately 90 Russians, 9 Kazakhstanis and Belarusian 3). It does not mean, because such a representation, in fact, will not differ in any way from the presence of a single emission center in Moscow. The ETSB should become a financial institution that takes all its decisions taking into account not only the interests of each of the parties, but, most importantly, taking into account common interests. In such a situation, each of the parties in the EABSB should receive the right of a “decisive vote”. That is, the decision is not made until all parties are ready to support it.

But this can simply paralyze the work. Well here it is: if we are really going to build the closest economic relations with each other within the framework of a full-fledged union, then the opinions of the parties should be listened to by definition and make only those decisions with respect to which there is general support. If you try to bend your line without taking into account the interests of other subjects of the EEU, then what kind of union is this? This is not a union, but merely a repetition of European economic integration errors, when lenders are ready to squeeze all the juice out of loans, and loans in turn are ready to hold out to the bitter end, pulling everything they can from lenders, with mutual indignation against each other.

Yes, of course, it is difficult to hear the opinion of 3% or 10%, if you have a multiple advantage, but you’re not integrating in order to count your share, but in order to increase your overall welfare. Is not it? And here at least Altyn, even Tugrik, even Peseta - the main thing is that for the common good, and not for the undercover games with unity only in paper form ...