Russian President Vladimir Putin sent a letter to the heads of European countries purchasing Russian gas in which he reported on “possible consequences for gas transit” to Europe in connection with Kiev’s debts. The full text of the appeal is published by ITAR-TASS. 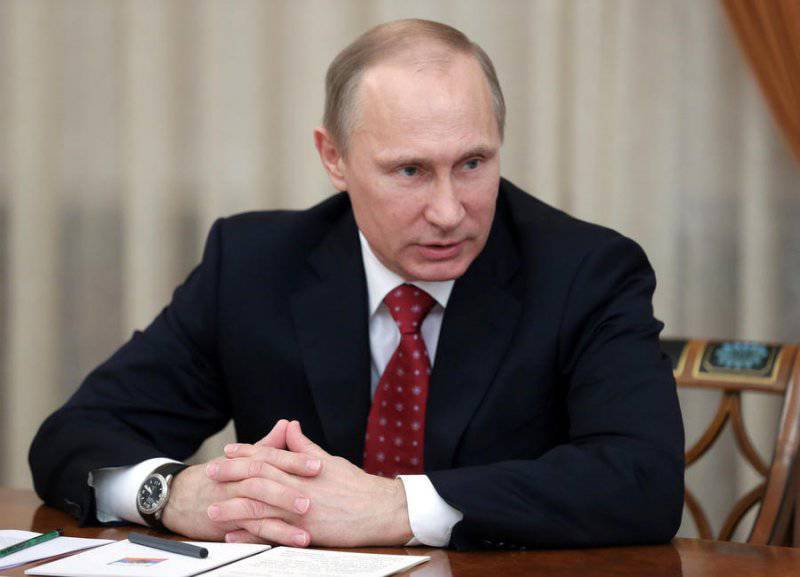 In recent months, the economy of Ukraine is rapidly deteriorating. The decline in industry and construction is deepening. The budget deficit is growing. The state of the monetary sphere is sharply worsening, the outflow of capital from the country has been added to the negative trade balance. The economy of Ukraine is approaching a default, a halt in production and an explosive increase in unemployment.

Russia and the European Union countries are the largest trade partners of Ukraine. Based on this, at the Russia-EU summit held in late January, we agreed with our European partners to hold consultations on the development of the Ukrainian economy, bearing in mind the interests of Ukraine and our countries in the formation of integration unions with its participation. However, all attempts by the Russian side to start real consultations did not bring results.

Instead of consultations, we hear calls to lower the contract prices of Russian gas, which are supposedly of a “political nature”. It seems that the European partners want to unilaterally shift the consequences of the Ukrainian economic crisis to Russia.

From the very first day of the existence of an independent Ukraine, Russia has supported the stability of the Ukrainian economy by supplying gas at low prices. In January, 2009, with the participation of Prime Minister Tymoshenko, signed a contract for the sale and purchase of natural gas in 2009-2019, which settled the supply and payment of gas and guaranteed its uninterrupted transit through the territory of Ukraine. And which Russia strictly observes. By the way, then the Minister of Fuel and Energy of Ukraine was Y. Prodan - he still occupies a similar post in the Kiev government.

The volume of natural gas supplied to Ukraine in accordance with this contract amounted to 2009-2014. (first quarter) 147,2 billion cubic meters I would like to emphasize - the “price formula”, fixed in the contract, has never changed since then. And Ukraine, up to August 2013, regularly paid for gas in accordance with this formula.

Another thing is that after the signing of the contract, Russia provided Ukraine with a number of unprecedented benefits and discounts on gas prices. This is a discount under the Kharkov Agreements of 2010, which was provided as an advance on account of future, starting from 2017, rental payments for the stay of the Black Sea fleet. Discount on gas prices purchased for chemical enterprises in Ukraine. The discount introduced in December 2013 for a period of one quarter in connection with the current critical state of the Ukrainian economy. Since 2009, in total, these discounts amounted to 17,0 billion US dollars. To this should be added another 18,4 billion US dollars - unpaid fines for non-selection of the minimum annual amount of gas (take-or-pay) by the Ukrainian side.

Thus, over the past four years, Russia has subsidized the economy of Ukraine at the expense of lowering gas prices in the amount of 35,4 billion US dollars. In addition, in December 2013, Russia provided Ukraine with a loan for 3,0 billion US dollars. These very significant financial resources were aimed at supporting the stability and solvency of the Ukrainian economy, the preservation of jobs and employment. I stress - no one has done this except Russia.

And what about European partners? Instead of real support for Ukraine, a declaration of intent. Promises without real deeds. The European Union uses the Ukrainian economy as a source of food raw materials, metal and mineral resources and, at the same time, as a market for finished products of a high degree of processing (engineering, chemistry), creating a trade deficit of Ukraine more than 10 billion US dollars. And this is almost two-thirds of the total current account deficit of Ukraine in 2013.

The crisis of the Ukrainian economy, largely caused by an imbalance in trade with the EU countries, has an acutely negative effect on the fulfillment of Ukraine’s contractual obligations on Russian gas supplies. Gazprom does not and does not intend to present any additional conditions as compared to those reflected in the 2009 contract of the year. This also applies to the contract price of gas, which is calculated in strict accordance with the agreed formula. However, Russia no longer has to and cannot alone bear the burden of supporting the Ukrainian economy, giving it gas discounts and forgiving debts, in fact, paying its subsidies for the trade deficit of Ukraine and the EU member states.

This year, the debt of Naftogaz of Ukraine for the gas supplied is growing from month to month. In November-December, 2013 of the year - 1451,5 million US dollars, in February 2014 of the year - plus 260,3 million, in March - another 526,1 million. I draw your attention that in March prices were still at a discount - 268,5 US dollars per thousand cubic meters. m. And even at this price, Ukraine has not paid a single dollar!

In such conditions, Gazprom, in accordance with paragraphs 5.1.5, 5.8 and 5.3 of the existing contract, will be forced to switch to prepaid gas supplies and in case of violation of the terms of payments, do not supply gas in whole or in part. In other words - exactly as much gas will be supplied as the Ukrainian side will pay for a month in advance.

Of course, this is an extreme measure. We are aware that it increases the risk of unauthorized withdrawal of gas going through the territory of Ukraine for European consumers. And that it may impede the formation of gas reserves in Ukraine to ensure its consumption in the autumn-winter period. In order to guarantee uninterrupted gas transit, it is necessary to start pumping gas in the volume of 11,5 billion cubic meters to underground storage facilities in Ukraine in the very near future. m - and it will require payments of the order of 5 billion US dollars.

However, the self-elimination of our European partners from joint actions to resolve the economic crisis in Ukraine and even from consultations with the Russian side leaves no alternative for Russia.

The way out of this situation can be only in one. To hold immediate consultations at the level of ministers of economy, finance and energy in order to work out coordinated actions to stabilize the economy of Ukraine and ensure the supply and transit of Russian gas in strict accordance with the contractual terms. And as soon as possible, proceed to coordinated concrete actions. To this we call our European partners.

Of course, Russia is ready to participate in the stabilization and recovery of the Ukrainian economy. But not unilaterally, but on parity with our European partners. Taking into account the actual investments and costs that Russia alone has been carrying alone for a long time, supporting Ukraine. Only such an approach, as we see it, is fair and balanced. And only he will lead to success.

Ctrl Enter
Noticed oshЫbku Highlight text and press. Ctrl + Enter
We are
Way out of chaos"Simplicity is worse than theft"
Military Reviewin Yandex News
Military Reviewin Google News
73 comments
Information
Dear reader, to leave comments on the publication, you must sign in.