Pace: to be continued? 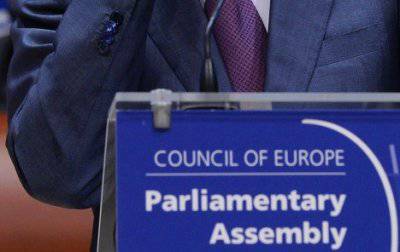 In the next three weeks, Moscow will announce whether Russia plans to continue to cooperate with the Parliamentary Assembly of the Council of Europe. This was announced after the PACE imposed sanctions against Russia. The calls of our delegation for constructive negotiations on the situation in Ukraine were not heard.


Deputies of the Assembly of the Council of Europe did not hold back on anything (the chairs of the Russian delegation were empty in protest, and everyone who wanted to speak about Russia without Russia).

"I will say that the Russian soul is mysterious. But the Russian, Soviet writer Viktor Astafiev revealed this soul. He said:" The Russian is a very good person. He will give you tea and he will warm you, but he will cut you ". Fear them," says Alexander Shevchenko, the representative of the Ukrainian delegation to the Parliamentary Assembly of the Council of Europe.

In the same spirit, all two hours of discussion of the resolution. Here the deputy from Moldova selects images.

“Dialogue is like Argentine tango. Two dancers are needed. But unfortunately, the Russian authorities can no longer dance. After all, one accessory is hindering Kalashnikov. Because of it, they begin to stamp on the legs of their partner,” the delegation representative said Of Moldova in PACE Anna Gutsu.

The delegations of Georgia, Lithuania, and Latvia presented their analysis of the events in Ukraine almost in full force. Events in Donetsk from Strasbourg are seen as the second wave of military invasion. The first, apparently, happened in the Crimea. The referendum on joining Russia was held illegally, under pressure from the military, the turnout is implausible. We did not see ourselves (the observers did not go to the Crimea), but we know for sure, the speakers said. Those who decided to inform Europe about the results - 96 percent "for" and about the same referendum in Kosovo - were reminded about the regulations. The Council of Europe lives in its parallel world and hears only what it needs, some deputies say. International law, about which people here like to talk so much, is interpreted in the way that benefits Europe and the United States of America.

“The West wants to colonize Ukraine and prepare a possible attack on Russia, which is already surrounded by colonies of the West and the USA. And we need to cooperate with Russia,” said Tamas Gaudi, the representative of the Hungarian delegation to PACE.

Tough sanctions - to drive Russia out of the PACE - did not dare. Until the end of the session, we were deprived of the right to vote, banned from participating in election monitoring missions and participating in bureau and committee meetings. Immediately after the adoption of the resolution, our delegation held a press conference at which it announced that it was leaving the session in protest.

"The most annoying thing about this storiesthat the Parliamentary Assembly has betrayed its own principles. The majority in PACE betrayed the principles of the rule of law, the rule of human rights and the rule of law. The majority in PACE went the way of serving the political interests of the group of states that is aimed at the geopolitical development of Ukraine, "said Alexey Pushkov, head of the Russian delegation to PACE.

Within two weeks, Moscow will decide how much Russia needs this House of Democracy - as Europe’s deputies call PACE. Its regular maintenance and visiting is expensive - 32 million per year. Russia is the largest sponsor. Until the end of the year, our money, which no one will return, will be printed tons of major resolutions and bought hundreds of tickets to Kiev. Trips to Ukraine among eurodeputies are in fashion today.

Ctrl Enter
Noticed oshЫbku Highlight text and press. Ctrl + Enter
We are
Moldovan independence: 24 of political uncertaintyResults of the week. "Who will be the last to leave the composition of Ukraine is also debts!"
Military Reviewin Yandex News
Military Reviewin Google News
101 comment
Information
Dear reader, to leave comments on the publication, you must sign in.