April 11 2014
127
Former Secretary of Defense and Former CIA Director Robert Gates recently published in the Opinion column. "The Wall Street Journal" a rather long article entitled “Putin's Challenge to the West” (“Putin’s Challenge to the West”). In it, he argues that Russia will "challenge" not only the Crimea or even all of Ukraine, but will go further. Why so? And because Putin, it turns out, “has long been offended” by the West, which broke the USSR. 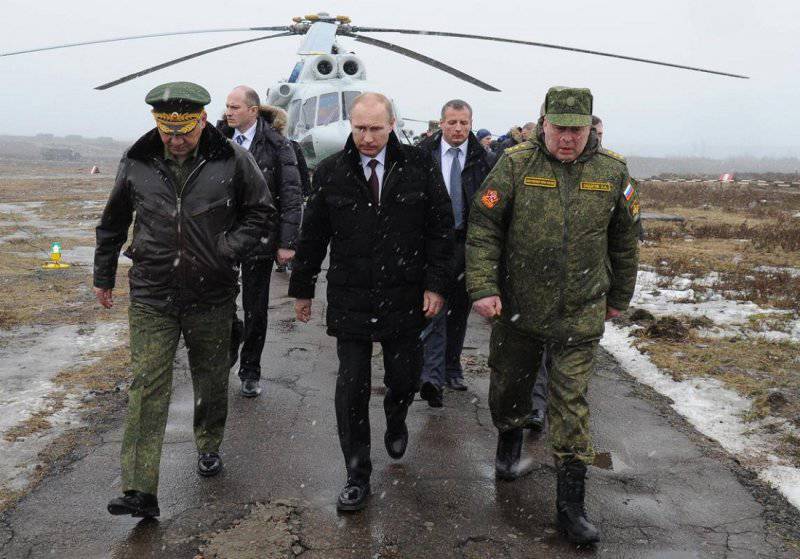 The President of Russia, in the opinion of the former Pentagon chief, has a long-term resentment towards the West. He is outraged that the West has won the Cold War. In particular, Putin blames the United States for the collapse of "his beloved Soviet Union." This decay, says Gates, Putin calls "the worst geopolitical catastrophe of the XX century."

V. Putin presented his "list of complaints" on March 18 in a speech in which he declared "the annexation of Crimea by Russia" (English original: the annexation of Crimea by Russia). According to Putin, Russia was humiliated in the 1990s: there was an economic collapse, and NATO expansion, where the Warsaw Pact countries were drawn, and much more, up to the current attempts by the West to accept Ukraine and Georgia into NATO and the EU. But at the same time, Putin is unhappy that Western governments, businessmen and scientists - well, absolutely everyone is teaching Russia, explaining how to conduct its business at home and abroad.

Robert Gates writes that Mr. Putin is seeking to restore global power and influence of Russia, as well as to draw into the orbit of Moscow those independent states that were formerly parts of the Soviet Union. However, Gates believes that Vladimir Vladimirovich does not have “an obvious desire to recreate the Soviet Union.” On the other hand, Putin wants to create Russian spheres of dominant influence: political, economic, and also to strengthen in the field of security. Moreover, the Russian president has no "grand plan or strategy", but only a "ruthless pursuit". And he also has “patience,” notes the former defense minister.

Mr. Putin is playing a “long game” that he “can afford.” Indeed, in accordance with the Constitution of the Russian Federation, he can legally remain president until 2024, reminds readers of Gates. Today, Putin is "ruthlessly" restoring "order" (in the original quotation marks: "order") in Russia, ignoring the protests at home and abroad and arranging reprisals against representatives of the "emerging Russian democracy."

In November last year, by clicking on “economic levers” and showing “political muscles”, Putin forced Viktor Yanukovych to stop the Ukrainian agreement with the EU. As a result, Putin’s favorite Mr. Yanukovich “was removed from power,” but Putin himself seized the Crimea, and now the world is witnessing “military movements” in eastern Ukraine.

Gates writes further that, according to Mr. Putin, Ukraine is important for Moscow as a pro-Russian bloc not only because of its size, but also because the future Russian empire originated in Kiev more than a thousand years ago. Putin will not be satisfied until the pro-Russian government is restored in Kiev.

Gates writes that Putin has “a completely different view of the world than the leaders of Europe and the USA.” The Russian leader "does not share the respectful attitude of Western leaders to international law, to the inviolability of borders, which, according to Western opinion, can change only in the process of negotiations, due process and under the rule of law."

According to Gates, Putin is indifferent to "human and political rights." If the West is based on the principle of mutually beneficial relations between nations, then for Mr. Putin, Robert Gates notes, every deal promises a loss to someone. On the one hand, the advantage, therefore, the other must lose. According to Putin, the acquisition, preservation and accumulation of power - this is the essence and meaning of the game. So thinks the former US Secretary of Defense.

How can the West confront such a man? It turns out that there are ways.

The West must enter into a long strategic game that Putin is playing on the periphery of Russia, Gates writes. Through Western influences, Russians should learn that Putin’s world view and goals will significantly weaken and isolate Russia.

Gates also offers practical tools for influencing Moscow. In his opinion, it is necessary to reduce Europe’s dependence on Russian oil and gas supplies. In addition, Russia should impose "really" serious economic sanctions. Finally, NATO allies on the border with Russia should be strengthened militarily.

Further, the former head of the Pentagon proposes to reduce Western investment in Russia. He also speaks not only against Russia's participation in the G-8, but also for excluding it from other international forums (“involving respect and legitimacy”).

Well, of course, ex-Secretary of Defense reminds President Obama that the US defense budget should be restored to the level proposed for 2014 by the Obama administration a year ago. We can not allow a sharp reduction in defense spending.

However, so far, notes Gates, with displeasure, "the reaction of the West was anemic." US unilateral financial sanctions would not be effective in the absence of European cooperation. Well, except that Russian banks will suffer some damage ... According to the ex-Minister of Defense, the gap between Western rhetoric and actions taken in response to aggression is “as huge as an abyss”. The West seems to be giving a signal to Putin: unless he introduces troops into Eastern Ukraine, the West will not apply any further sanctions or punitive measures. Russia's seizure of the Crimea de facto will remain without consequences, Gates writes, if not to consider “a handful of Russian officials” who suffered from the sanctions.

Meanwhile, R. Gates believes that no one wants a new cold war, not to mention a military confrontation. “We want Russia to be a partner, but this is obviously impossible under the leadership of Mr. Putin. He challenged, which is not limited to the Crimea or even Ukraine. His actions challenge the entire order that has developed since the end of the Cold War, including, above all, the right of independent states to join those and do business with those whom they choose. ”

Putin’s activity, Gates notes, came at the most unfavorable time for the West. Europe is weakening and has significant economic ties with Russia. The United States has been in a state of war for more than a decade, and as a result, the leaders of both parties faced growing isolationism among voters. Gates notes that the Crimea and Ukraine are far away, and the public understands their significance for Europe and America a little.

The former secretary of defense advises American leaders to take on the "burden of explanation."

It seems to add as a commentary, a manifestation of “strategic thinking” among Western leaders would be a desire to abandon the new cold war and the military confrontation, which in fact one way or another R. Gates preaches. From 2006 to 2011 years, this man was not the kitchen, but the Pentagon. And his recommendations to strangle Russia with sanctions, which supposedly intends to seize not only Ukraine, but also something else (not named), very much resemble a clear desire to unleash a new cold war. And the councils to strengthen the allies of the United States in NATO militarily and to cancel the planned cuts in the US defense budget are nothing but an obvious message to the new arms race. And behind this race, as you know, the ominous ghost of military confrontation always looms, which Mr. Gates allegedly does not want ...

Observed and translated by Oleg Chuvakin
- especially for topwar.ru
Ctrl Enter
Noticed oshЫbku Highlight text and press. Ctrl + Enter
We are
Results of the week. “He who does not regret the collapse of the Soviet Union, has no heart; who wants to recreate it in its previous form, he has no head "Results of the week. "Who will be the last to leave the composition of Ukraine is also debts!"
Military Reviewin Yandex News
Military Reviewin Google News
127 comments
Information
Dear reader, to leave comments on the publication, you must sign in.