What gifts does Ukraine accept, and does the revolution have an end?

April 10 2014
141
Observing the situation in Ukraine, the course of the so-called Ukrainian revolution, one involuntarily comes to the conclusion that the completion of the revolutionary upheavals in this country is simply not included in the plans of those who associate themselves with the new government. These people are well aware that as soon as the revolutionary machine stops, as soon as the shroud over Ukraine (or what remains of Ukraine by that moment) disappears, people will see what is left in their wallets. And when a man with a bad look glances at his thin wallet, at the mouse, about to hang himself in his fridge, then write to him gone. There are two options: either to the authorities themselves to rally the revolutionary machine, accusing the Kremlin agents of all sins, without thinking, and demanding that the maydaniating continue to "complete and unchallenged victory" (albeit over common sense), or to experience the real cudgel of the people anger is not a revolution from above and from abroad, but from below - from the internal, let's say, reserves. 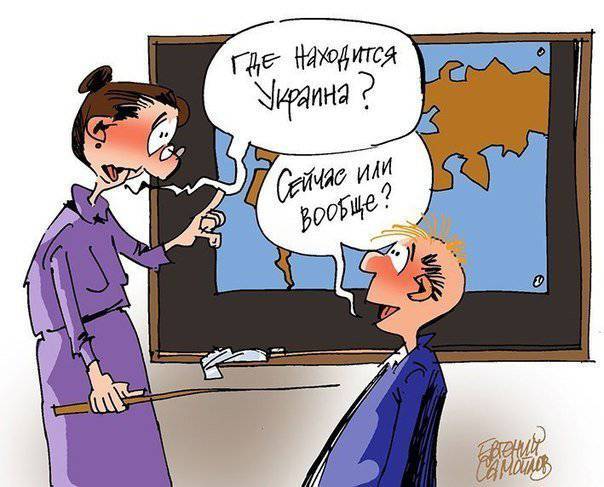 In the Ukrainian case, today there are two scenarios working at once. The western and central parts of Ukraine are trying to put pressure on the revolutionary gas, blaming all the Ukrainian misfortunes and misfortunes on the “mosquitoes”, the southern and south-eastern regions are determined to move the club of popular anger in response. Kosa found a stone that, while playing into the hands of the gentlemen, who came to show themselves in the power of Ukraine, only with the aim of quickly snatching a favorite piece for themselves, bigger and more sweet.

What will change if soon Ukraine chooses a president? What will change is that Ukraine will have two presidents at once (or even three, if Turchinov suddenly decides that he will relinquish the powers of All Ukraine too early) ... There have already been three tours in Ukraine, so why cannot there be three presidents ...

As for the rest, no epochal progress, especially movement in terms of calming down the people and improving the economic situation, will definitely not bring elections.

But nobody speaks about this today in Ukraine from those rushing for power. If any programs are presented, in the overwhelming majority of cases they are reduced to advance calls for help: from the EU, the US, the IMF and NATO together. Loans, donations and everything like that ... Foreign countries will help us! Wow thesis for a presidential candidate ...

In this regard, the thesis of some candidates that the EU, the USA and “all progressive humanity” are already helping Ukraine, and that, when I’m going to become president, is even more touching, the help will be just comprehensive - as they say, you won’t get rid of help ... and you won’t get rid of it. Take at least one of the current examples. Last Friday, the international rating agency Moody's already “dumped” its “comprehensive assistance” to Ukraine. It was expressed in the fact that Moody's once again lowered Ukraine’s credit rating (Eurobond rating) to Caa3 with a negative outlook. Information publishes Israeli "9 TV Channel".

At the same time, the agency announced that they had to take such a step for the reason that Ukraine has social and political tensions affecting the Ukrainian economy, adding as reasons that Ukraine is unable to service the debts accumulated during the purchase Russian gas (today this debt is about 2,2 billion dollars).

Adds “optimism” and the World Bank, claiming that the economy of Ukraine in 2014 year will fall by at least 3%. The UniCredit expert group states that the fall of the Ukrainian economy in 2014 will be at least 6%.
After such statements by representatives of the World Bank, another rating agency, Standard & Poor's, downgraded Ukraine's short-term credit rating to C.

It would seem that Ukraine should pay attention to whims of international rating agencies. So the fact of the matter is that you want it or not, but Kiev will eventually have to pay attention to these data. The Caa3 rating (according to the Moody's classification) is the penultimate step, and the C grade (according to the Standard & Poor's scale) is the last bar before the default.

In fact, this means that for the creditors of Ukraine these are the most successful ratings on the Square, since now Kiev will be able to lend at almost the highest interest possible today. If a year ago, international financial institutions credited Ukraine with a maximum of 6% per annum (the government of Mykola Azarov agreed on this), then, based on the credit ratings of Kiev, today this percentage may increase at least 2,5 times. That is, the minimum loan rate for Ukraine in 15-16% per annum - these are the main achievements of the Maidan "revolutionaries".

But after all, after the recalculation of interest rates on loans for the Ukrainian economy, the world players were inspired, apparently thinking that Ukraine should certainly be given a loan at such hefty interest for the greatest own benefit. He will pay, great, will not pay, they will arrange a new revolution, take over the remaining assets, production facilities, resources ...

There is a direct analogy with Russia 90-x, when they lent us quite willingly, but at the same time forcing us to sign documents with the most incredible obligations (and privatization ones as well). On what rails then went privatization in Russia, and what is “tightening the belt” according to the requirements of the IMF - many people remember well today.

By the way, about Russia. When the government of Azarov agreed with the Russian Cabinet on the provision of a loan from the Russian Federation (the purchase of Ukrainian debt), the agreements indicated the percentage corridor 4-5% per annum.

In fact, Moscow gave money to Kiev under 4-5% (they managed to send 3 billion dollars from 15 billion). Now Kiev is “negotiating” about receiving a loan from the IMF and the EU under the above-mentioned 15-16%. + 12% per annum - and this is still the minimum!

It turns out that these same self-proclaimed authorities of Ukraine are completely economic losers? Well, I do not! Unfortunately, the Ukrainian people remain in the losers today (exactly the same way as the Russian people were in them in the “dashing” 90's), but the political and economic “elites” are banal, sorry, thieves and nothing more. By signing under the receipt for Ukraine of a loan at phenomenal interest rates according to international financial norms, the new “government” hangs the heaviest burden not at all on itself, but on ordinary Ukrainians, in addition to being able to use the allocated funds at its own discretion.

Why sign? Yes, precisely then, just to get money from the West, to get to the billions themselves. But what about the enslaving conditions? Well, they are enslaving for the people, and not for a narrow group of gentlemen who have come to power ...

Yanukovych was cursed because he stole so many percent of the funds allocated for Ukraine, but even if so, then today the new “authorities” are determined to do exactly the same thing ...

What kind of stabilization of the situation in Ukraine can we talk about when the new “authorities” need to with all their strength keep the smoke screen from dispersing it in the air so that, after holding themselves in power themselves, they need to properly fill their pockets and turn over time into economic experts out of power (in Russia have their own analogues). In the near future, Kiev will not stabilize by definition: the main enemy is already designated - naturally, Russia - and this somehow gives the ukrovlasts the opportunity to manipulate the people. The barricades are not dismantled on Independence, the barricades are being built in the information space with the sole purpose of boiling up the people, but the truth will not appear before it very soon.

Ctrl Enter
Noticed oshЫbku Highlight text and press. Ctrl + Enter
We are
Results of the week. "In the Greek Hall, in the Greek Hall ... the mouse is white!"Situational analysis of the death of the MH17 flight (Malaysian Boeing 777), made on the basis of engineering analysis from 15.08.2014
Military Reviewin Yandex News
Military Reviewin Google News
141 comment
Information
Dear reader, to leave comments on the publication, you must sign in.