In Donetsk, form a provisional government and await the assault 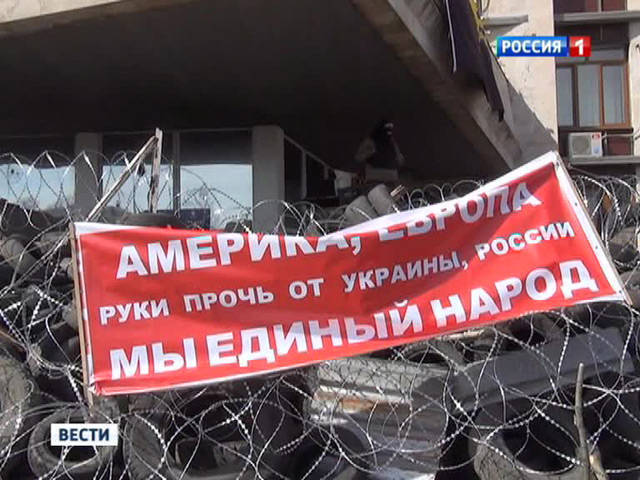 Meanwhile, in Donetsk, supporters of federalization form a provisional government. Donbass was the first among the Ukrainian regions to proclaim itself a sovereign republic. Protesters hold the regional administration building and declare that they will stand to the end. The richest Ukrainian oligarch, Rinat Akhmetov, acted as a negotiator, but did not listen to him either. The patience of people dried up - the opinion of the inhabitants of the south-east Kiev stubbornly ignores.

Over the past day, nothing radically changed at the regional state administration building, except that the anticipation of the assault became more obvious. At the entrance to the building appeared the second cordon of tires. People from the square do not disperse, but they refuse to call for the authorities to vacate the premises. Everyone is waiting for what will happen next.

Life in the regional administration does not subside even at night. Opponents of euromaidan are waiting for the security forces to storm the regional administration. And after the statement by the Minister of Internal Affairs Avakov appointed by the Verkhovna Rada that the special forces deployed to the region are ready to solve operational tasks by any means, rumors begin to creep that the special forces have an order to shoot to kill. “Yes, you can’t shed blood here. We’re all here — Orthodox Muslims are brothers,” says one of the residents of Donetsk.

A respected Donetsk businessman Rinat Akhmetov arrives at the rally at night. He is supposedly a mediator between Kiev and the people. Suggests to go to the negotiations.

Later it becomes clear that the businessman was trying to conduct negotiations right on the square, with his approach to a business person. If the protest cannot be suppressed, you can try to buy it. “I stood aside, he didn’t have a long time, he offered hryvnias to our people on 100 so that they would leave, but our people refused. There was a conflict and they drove him out, they didn’t do anything to him,” said another Donetsk resident Nadezhda Lukyanova.

One hundred hryvnia is less than ten dollars. For people who hold the second day of defense and are ready to give everything up to life, this is clearly an unequal bargain. However, any trading here is inappropriate. The newborn Donetsk Republic today dismissed all executive power, including the oligarch governor Taruta, from their posts. And she appointed a provisional government. “There is a lot of work for the power block,” says Miroslav Rudenko, a member of the Donbas people's militia. “It consists of our activists who have organized and strengthened over the past two days.”

Among the new people's deputies, there are also former parliamentarians who believe that the seizure of the administration in many respects provoked the inaction of the local authorities, who had withdrawn themselves. "I say - we are on the verge of bloodshed, let's go out and do something to prevent this, but there is no answer", - exclaims the deputy of the Donetsk Regional Council Irina Popova.

The governor of Taruta does not appear on the public plane. On the air of local channels the mayor of Donetsk Alexander Lukyanchenko blows for him. He does not agree with the seizure of the administration, nor with the demands of the people.

One of the first appeals of the leadership of the newly formed Donetsk Republic was a call to all the security forces located in the region to join the people and take the oath of the new state. There was no answer yet.