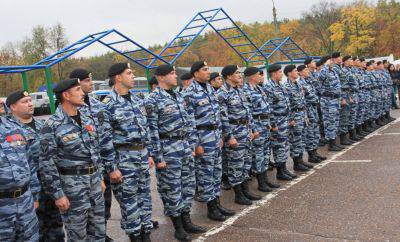 The first fighters of the former Ukrainian special unit "Berkut" came to work in the Moscow riot police, said the assistant chief of the Center for Special Purpose Center of Specialized Personnel for Personnel Work of the Directorate of the Ministry of Internal Affairs in Moscow Vyacheslav Tkach.


The fighters have already begun to apply for Russian citizenship and all the necessary documents for entering the service in the internal affairs bodies of Russia. The weaver reported that “at the moment there are a sufficient number of interested persons from among the employees of the“ Berkut ”who have already applied and are undergoing the process of obtaining Russian citizenship and the military-medical commission, ITAR-TASS reports.

He said that today another officer, a major of the special unit "Berkut", arrived in the TsSN for employment. He was explained the procedure for entering the service in the internal affairs bodies of Russia, showed the base units, gyms, training classes, showed how the life of special forces.

"We are ready to assist each employee of the" Berkut "in the recruitment," said Tkach, adding that employees of the "Berkut" divisions will not have any problems with living.

“We will provide them with a hostel in our base. The issues of accommodating employees with families are being addressed, ”said Tkach.

The representative of TsSN stressed that the service of the “Berkut” in the Russian police will preserve their years of service and rank, the length of service is calculated at the rate of a year and a half and they will enjoy all the privileges required for the officers of the internal affairs bodies of Russia.

The representative of TsSN noted that there are no fundamental differences in the maintenance of public order between the Russian police and the Ukrainian police.

“I think that there will be no difficulties in the work of new employees here,” said Tkach.

In turn, an employee of the “Berkut” named Roman, who arrived in Moscow to get a service to the Moscow riot police, told reporters that “the Ukrainian TV channels present the events in Kiev one-sidedly, exposing the units of the“ Berkut ”to the enemies of the people”.

“The militants of the Right Sector are radically opposed to the police. The eastern, southern part of Ukraine considers the employees of the “Berkut” to be heroes, the western one calls them traitors. There are calls on the Internet to kill the families of police officers, even with children, ”said Roman.

In this regard, he explained, many officers of the Ukrainian special police units who tried to resist the radicals on the Maidan, are afraid for the lives of their relatives.

According to the employee "Berkut", many employees of the unit have relatives and friends in Russia and intend to move to the Russian Federation.

“None of the colleagues, those guys who stayed in Ukraine, are not protected socially, not legally,” said Roman.

He admitted that after visiting the base of the Moscow TsSN, "his moral state has improved a lot." "I am ready to continue the service," - said the employee "Berkut".

Recall that in March, Russian Interior Minister Vladimir Kolokoltsev said that the families of employees of the Berkut disbanded in February, who want to move to Russia, will help with housing and teaching children. In addition, the ministry reported on the readiness to employ the Ukrainian police.

Special units and colleagues from Russia are also actively helping: about 100 thousand Russian police have already transferred money to help the Berkut and other units of the Ukrainian police.