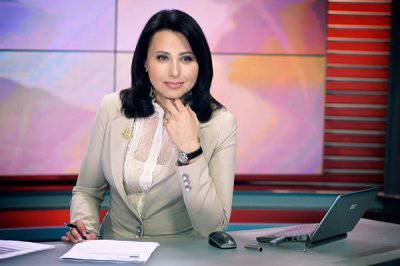 There is no point in looking news on TV, since all the informational plots are reduced to five main “blanks”. Freedom of speech has come such that there is nothing but “freedom”. And absolutely no one like the position of the media, characteristic of the same Rwanda, does not care. The movement “Stop Censorship!” Dissolves itself, as its representatives are busy with interesting and profitable business: they are trying to lyustrate their opponents with might and main and frankly lament about the abolition of the death penalty, as well as nuclear status. Nobody’s media freedom ratings anymore, since Syumar is occupied with a more global problem: clearing the information field of “Russian filth”.


And now let's move on to the five main topics that are practiced by all central media. In our opinion, this is pure totalitarianism, but who cares about this in the country of a victorious democracy?

The first topic: “Everything is bad in Crimea”. It is recommended to put the story on this topic first, if there is no fresh information about the capture of the next Russian saboteur. “The occupying armored car“ Tigr ”crashed into a peaceful trolley bus: everybody suffered. Everyone feels bad, no one gets help, because the phones do not work. Shooting began, interruptions in water and electricity. Crimeans who voted for joining Russia cry bitter tears and rush to the mainland. Here is a typical column of refugees, which has been breaking through the besieged Simferopol for the second week already (they show a grandmother who is watching the excavator with surprise). In the development of the theme: all planes fly around the Crimea with disgust. Those who are still flying, make indecent flapping wings. The Tatars are massively enrolled in the National Guard, and they are massively repressed by the heavily armed Kadyrov guards. The entire leadership of the illegal autonomy is mired in bribes, and at night goes to hunt for specially captured civilians of Galicia. But! Here is the courageous patriot of Ukraine living in Crimea, and her heart, liver and ileal region hurt for what is happening on the peninsula now. We give her the word: “Hello, my name is Odarka, I was born in Lviv, and the last time I was in Crimea was in the third grade, when my parents managed to get a discount ticket. I, as a root “Krymka” (they say so), is infinitely outraged by the annexation by Russia of centuries-old Ukrainian territory. There I have a lot of friends who constantly call me, write and cry bitterly. One close friend, who somehow mistakenly sent me a text message, and then we became friends in another text message, people in military uniform took away right on the street. They tortured him, cut off his ears, legs, cut out the pancreas and ate it all. All my friends are going to leave for the mainland, since there are no forces to demolish all Russian bullying. ”

Meanwhile, the Ukrainian military, remaining in Crimea, continues to fight bravely. Damned invaders force them to take out the latest military equipment, which has become completely unusable. Here's what a courageous colonel says: “Occupants force us to load Tanks. They mock us. But we are faithful to the oath. Every day we sing the anthem of Ukraine and personally report to the Minister of Defense about the battery, which must be sent, since the vile enemy does not give a new one. We believe in the unity of Ukraine, trust the Supreme Commander-in-Chief and continue to exemplary serve. ” Immediately after the synchron, they show a hysterical journalist who is trying to orally prove to the colonel that the whole country is watching their unparalleled feat with bated breath and literally at that time rockets take off, planes fly, the volley fire systems rumble, which will sweep away all this evil in seconds sacred Ukrainian land, abundantly watered with the blood of Bandera and Shukhevych.

Topic number two: "The civilized world is in a hurry to help." “The negotiations with the IMF mission that took place in the Cabinet of Ministers ended with an unprecedented success. Ukraine was promised a tranche of 1 (2, 3, 4, 5, 6 ...) billion euros. Foundation officials admit that at night they are reviewing shots from Maidan, crying and swearing that they will do everything they can to make Ukraine a prosperous country with an advanced entertainment industry by 2045. Here is a comment by a famous international expert, whose name we could not find out: “Of course, Ukraine demonstrates positive dynamics in overcoming challenges and sends good messages positively perceived by the business community in terms of increasing investment attractiveness and hedging risk diversification in static processes in Guatemalan stock markets” . “NATO Secretary General Rasmussen promises to equip the Ukrainian army with the latest military equipment in the form of ultra-modern rations and special sticks for eating rice. The NATO military group is ready to provide effective assistance in a matter of seconds, and today it is the guarantor of the peaceful de-escalation of processes. ” “The Supreme Commander at a military training ground was shown a secret tank, from which they managed to shoot in the direction of a likely enemy. This is a promising development of the military-industrial complex of Ukraine, which is not in service with the backward army of Russia. ” “The United States sent a special ship to the Black Sea, which is capable of scaring off the entire Black Sea fleet of invaders. On this occasion, a flash mob took place in Lviv, on which mobile phones with the anthem of the Soviet Union were burned. ” “The US Senate adopted a resolution in accordance with which sanctions are being imposed against aggressive and backward Russia, so that it will not last a second. As soon as they come into force, the entire economy of the Russian Federation will collapse, the regime of the fascist Putin will fall, and the Maidan will begin on Red Square. ”

Subject number three: "SBU Bdit." “It has just become known that the head of the most advanced intelligence service in the world, Valentin Nalyvaychenko, personally detained a spy armed to the teeth, who was going to undermine everything: national security, the Verkhovna Rada building, the Cabinet building and even a water pump in Konotop. Nalyvaychenko stressed that this is the thousandth spy of Russia, detained over the past twenty-four hours. At the same time, the certificate of Colonel General of the GRU, a ticket to the circus (on May 1) and five tons of explosives were withdrawn from the mean saboteur. The explosive was stored in a special hole dug in a conditional place. Thanks to a highly professional investigation, it was possible to establish exactly who stole the purse from Nalyvaychenko in the fitness center of the Hyatt Hotel. The head of the SBU did not manage to tell all the details, but in an exclusive interview with our channel, he said: “I have two questions for the Russian Foreign Intelligence Service: who went to the toilet at the SBU training ground in February? What was the title of these people? And where is the credit card that disappeared from the purse? "

Theme number four: "Increased readiness." “The Secretary of the National Security and Defense Council Andrei Parubiy with the informational support of Syumar managed to thwart Putin’s next plan to destabilize the situation in the eastern regions of Ukraine. And on the borders with Russia is still restless. Our correspondents recorded the accumulation of the one hundred thousandth group, which is about to invade the territory of Ukraine under the far-fetched pretext of protecting the rights of Russians, who, to be honest, no one considers the people here. So, dust under your feet, having the audacity to engage in separatism. The Ukrainian border guards do this armada with their own hands, because they are patriots. The border is at the castle, and the castle is with Ensign Malyatko, who is ready to defend himself to the last. Synchron ensign: "Even if I will cut the emblem of Russia on my wide, hairy chest, I will look with contempt in the face of the executioners, and finally I will sing the anthem of Ukraine to them." More and more people refuse to travel to the Russian Federation, so the trains are packed to capacity. But this is all an illusion, because in reality no one is going anywhere. All residents of the border areas voluntarily dig anti-tank ditches and hellies. When mobilization was announced, millions of volunteers expressed a desire to join the glorious and invincible army. Synchron: “Well, how did you get it, they sent it, they said that it was otherwise eight years, and most importantly, it was not even necessary for the medical board to undress. I have been sitting in a tent for a month now, they have been fired from work, my wife is crying, the children are not fed, she is in a fighting mood, have you gone to ..., a tattered goat. As we see, the mood of the volunteers is elated, they are ready to remain in the army as long as necessary. ”

Topic number five: "The Ministry of Foreign Affairs of Ukraine inspires fear in the Russian Federation." “Today at a briefing in response to the desire of the Russian Federation to raise the price of gas for Ukraine, the speaker of the foreign affairs agency Rebeychan has shown his ass to the Ministry of Foreign Affairs of the Russian Federation. This is the position that the Foreign Minister, as well as all of his staff, adheres to. Mr. Perebiyglaz, mockingly scratching his right egg, suggested to Putin that he should be circumcised in order to correspond to the multinational composition of the cursed Russian empire. With further escalation of the conflict, the speaker of the Ukrainian Foreign Ministry promised to demonstrate his member at a briefing in order to solve all the unresolved issues in bilateral relations once and for all. ”

Ctrl Enter
Noticed oshЫbku Highlight text and press. Ctrl + Enter
We are
What you didn't want to know about EnglandUSSR disaster was controlled
Military Reviewin Yandex News
Military Reviewin Google News
78 comments
Information
Dear reader, to leave comments on the publication, you must sign in.