Why have to lie. Analysis of the fresh revelations of the Minister of Economy 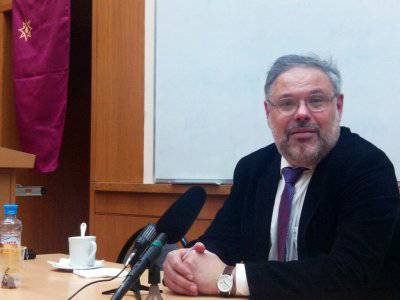 Last week, at a conference, Minister of Economic Development Ulyukayev spoke with another revelation. According to him, economic growth in the country in 2014 could amount to 1,8 – 1,9%, and capital outflows - $ 100 billion. “We did the calculation, how does capital outflow affect investments, on economic growth. It turns out that, from the point of view of production factors, growth for 2%: 1,8 – 1,9% will be normal for this year, ”he said, adding that in the calculations they assumed that in the first quarter of 2014 capital outflow would be about $ 60 billion. "This is about the repetition of the entire volume of last year," the minister added.


And here comes the natural question. When Ulyukaev was the first deputy chairman of the Central Bank, responsible for the situation with the inflow / outflow of capital, he, after the spring of 2012, when the active outflow of capital began, repeatedly said that this outflow was about to end. The question arises - is his assessment of economic growth made on the basis of the same grounds on which he spoke of the inevitable beginning of capital inflows? If “yes”, then, firstly, where does the outflow of 100 billion come from, and, secondly, why should we believe it about growth, if it was seriously wrong with the influx?

If “no”, then the question arises, at what point did Ulyukayev change his position, why did he change it, what factors played a role here, how did these factors influence capital outflows and why did they weaken the influence of this outflow on the economic recession? Without explaining these points, without having received an answer to these questions, we cannot only believe that Ulyukaev, but even simply agree that he has at least some non-contradictory picture of the Russian economy.

Ulyukayev himself speaks on these topics extremely vaguely, but does not answer real questions at all. In particular, he said that even if this unstable situation is a “one-off wave”, the outflow could amount to $ 100 billion this year. In this case, GDP growth will be 0,6%. “From the point of view of investors, this is a pause. People are not ready to make investment decisions, because they assess risks as unacceptable and do not agree to such an incomprehensible situation. This affects foreign investors, it affects domestic investors, hence a large capital outflow. ” From my point of view, this is not even an excuse, it is just pure demagoguery.

Not able Ulyukaev also explain the situation with inflation. He noted that in the middle of 2014, inflation could make 7% year-on-year, but then decrease. “Our inflation is increasing. We believe that by the middle of the year it will be 7% y / y. Then she will go on a downtrend. It is very likely that it will still (by the end of the year) be slightly larger than 5%. ” Here, too, the following questions arise: why doesn’t inflation increase with his devaluation? Why do prices in stores grow, if there is no consumer inflation (and Ulyukaev means consumer inflation under the word “inflation”), why does he refuse to talk about price increases in certain sectors of the economy? Such silence is understandable if Ulyukayev lies in his predictions, but if he really has at least some more or less adequate model behind his back, in the current situation, when everyone remembers his unfulfilled predictions on capital inflows, he would simply have to tell about this model ... But, as they say in the famous cartoon, "the hamster is silent."

Actually, I have a position, why it is silent. And it is very simple. The model of economic development that was proposed to the country by E. Gaidar on the basis of the notorious “Washington Consensus” was very simple: development should take place on the basis of foreign investment, without government participation. But foreign investments are made in foreign currency, which means that they should be given in foreign currency. Which automatically limits their volume. If you simplify the situation to idiocy and assume that any investor is satisfied with 10% annual income on invested capital, then the total investment can not exceed ten times that part of the currency available in the country that can be used to return these investments. If there are 100 billion, then the investment can not be more than a trillion, if 300 billion, then, respectively, three trillion, and so on.

Of course, the picture is much more complex and colorful, but this primitive model describes the essence of the situation. So, if you look at the big picture, it looks like this. So far, in the 2000s, amid growing oil revenues, foreign exchange earnings grew — foreign investments also grew, and the Gaidar model worked. But then the problems started ... Oil prices stopped growing - and the amount of foreign exchange earnings also stabilized, even fell a little. Moreover, the part that could be sent for the return of foreign investment began to decline.

The fact is that not all currency earnings go to return on investment. The part goes to interest payments on previously made foreign currency loans. And they grew rapidly, because the liberal Central Bank, according to the same recipes of Gaidar (remember: in order for investments to flow into the country, low inflation is needed, and for this it is necessary to reduce the amount of money in the economy! And in no case should there be more rubles than the amount , corresponding to the reserves of the Central Bank in foreign currency!) did not refinance the economy with rubles, and she, of course, refinanced in foreign currency. Today, our corporate debts already have more gold and foreign exchange reserves of the Central Bank, and all the increasing interest is paid on them. In currency, of course.

Another part of foreign exchange costs goes to the purchase of imports. The manufacturer always carefully looks where it is more profitable to produce, and if it is better to do it outside of Russia, and then import finished products, he will not invest in Russia. After the spring of 2012, it became clear that we are joining the WTO, the balance here has dramatically shifted towards import purchases, respectively, the share of currency that we can send to return on investment has decreased.

Most likely, around the end of 2012, our economy came to a situation where new foreign investment was unprofitable. The investor simply has nowhere to take profits to return the invested funds. Accordingly, the outflow of capital and the economic downturn began, which gradually progresses since the fourth quarter of the 2012 year. And if you look at the picture of the economy from this point of view, then there are no contradictions, on the contrary, everything becomes simple and clear.

The trouble is that Ulyukaev, who was also an assistant to Gaidar when he was an official, and his deputy for the institute, cannot admit that the whole Gaidar model no longer works. Since, most likely, he is still not quite a moron, which means that he sees the real picture, he has to lie all the time about the real state of affairs. But at the same time, he is constantly confused in details and contradicts himself - which causes the strange picture that we see in his speeches. And the longer he has the opportunity to do this - the longer our economy will fall.

Ctrl Enter
Noticed oshЫbku Highlight text and press. Ctrl + Enter
We are
New plants and workshops in Russia in 2014 yearWhat you didn't want to know about England
Military Reviewin Yandex News
Military Reviewin Google News
83 comments
Information
Dear reader, to leave comments on the publication, you must sign in.