Obama as a "new historian" 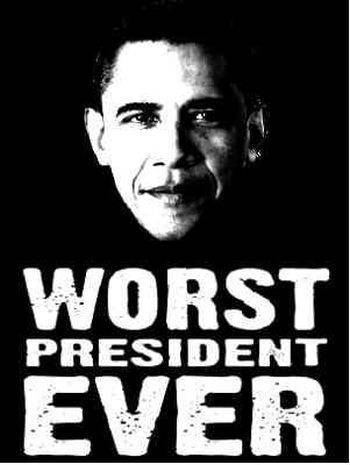 Barack Hussein Obama, sitting on a throne in the White House for a second term, recently made another historical opening. We have no doubt that in the near future it will be recorded in American school history textbooks. And then do not let the young citizens of the United States take offense after failing at some world scientific and humanitarian olympiads! .. Young citizens will have to make complaints not to the judges, but to B. H. Obama.


During the time of this president, the worst in American history (so many Americans believe, who voted for Obama in 2012 just to avoid electing a lover of Romney warships), the United States has reached the last point of dullness. Half of young Americans do not know how to show New York on the contour map, and about a quarter think that the sun revolves around the earth. A few percent believe that the planet is ruled by reptiles.

The rulers of this country are worthy elects of their people.

Obama's predecessor in the Oval Office, George W. Bush, a great connoisseur of geography, could not find on the world map Iraq, with whom he waged war.

This “new historian” called South Dakota at a rally in front of its citizens Iowa.

Obama remembers little at all. We do not know what is to blame: either the president drinks too much honey beer, which he brews right in the White House, or he drinks too little.

As part of the second election campaign, Mr. Obama loved snacking in public. You know, the image of a simple guy ... In June, he ate spicy pork ribs in a barbecue sauce with a side dish of vegetables and rice at Kenny's BBQ on Capitol Hill in Washington. Meal with the president was divided by two military and two hairdressers. The five-year-old American food-hungry has dropped off from Kenny's BBQ, forgetting about the 55 dollars bill and 58 cents, not to mention the tips. I had to barbecue administration to call the White House and demand money for ribs and sauce.

Before the election of 2008, Obama said that in the US there are 57 states. And in February 2009, the new president told Congress that the car was an American invention. He explained to congressmen that it was necessary to support the domestic auto industry, and said that “the nation that invented the car cannot remain without it”. Meanwhile, some congressmen recalled the names of Daimler and Maybach, and even suggested that these two were not Americans.

Barack Hussein could have looked at the Internet. Or reference books, in the encyclopedia. Doubt - check. Or did American “exclusivity” interfere? Did Americans invent everything? And they discovered planet Earth? And he could learn better, read more books. Too busy as president? But he said about 57 states before this very employment ...

The leader of the American people makes one historical discovery after another. The other day did another.

Speaking in Brussels, B. Kh. Stated: “Kosovo left Serbia only after a referendum was organized there, not outside the framework of international law, but in careful cooperation with the UN and its neighbors Kosovo”.

The trouble is that there was no referendum there “in careful interaction with the UN and Kosovo’s neighbors.” Back in 1991, a self-styled “republic” was proclaimed there and a fake referendum was held, which was not authorized even among the Albanian community. In the 2008 year, when the Albanian authorities of the province declared independence from Serbia and the creation of the same “Republic of Kosovo”, no plebiscite was held. True, later, in February 2012, a referendum on the recognition of the authorities of the self-proclaimed Republic of Kosovo was held - but only in North Kosovo, where Serbs live predominantly. The question was put to that referendum: “Do you recognize the authorities of the so-called Republic of Kosovo?” 99,74% of those who voted answered “no”. West (recall Obama) the outcome of this plebiscite did not recognize.

And if B.Kh. spoke about this referendum, then he should immediately declare the “Republic of Kosovo” an illegal and illegitimate entity. In this case, the general Western opinion about the "illegality" and "illegitimacy" of the referendum in the Crimea would acquire at least some kind of legal basis.

The astonished Russian Foreign Ministry responded to the American connoisseur of history in a special letter on his website. Russian diplomats, who have a better memory than Obama, reminded him that there was no referendum in Kosovo, and even "even more coordinated with the international community." And the White House speechwriters had to write an excuse.

The Russian press published the following translation of the excuse that appeared: “In Kosovo, our president had in mind the unique situation in which independence was the result of many years of exhaustive negotiations and interaction with the leading role of the international community.”

Obviously, the “leading role of the international community” (that is, the USA) completely replaced the referendum, that is, the will of local residents. So what is the "Kosovo precedent"! And we, the Russians, naively believed that it could be applied to the Crimea!

The site fbii.org made an exemplary review of the failures of B.H. Obama. This material, mainly based on the book 150, the reasons why Barack Obama is the worst president in history, perfectly complements the portrait of the “new historian”.

Best-selling authors are Matt Margolis and Mark Noonan. They write: "The current inhabitant of the Oval Office is more incompetent and disastrous for the interests of the United States than the most useless of the farmers in Georgia."

Obama ruined the country's economy, sponsoring the Arab Spring and coups in different countries. Obama made it so that "the debt curve rushed somewhere into space." Taxpayers' money under B.Kh. went on dubious adventures. 184 million dollars was spent on the organization of Kiev "Maidan". 192 million. Obama transferred to the Palestinian rebels. Huge amounts were received by the Syrian and Libyan fighters. Handing out money for coups, Obama often ignored Congress.

This president introduced the practice of total informing. Since August 2009, Obama supporters have been obliged to provide the president’s administration with “e-mails and videos”, “rumors”, “letters” and notes (!) Of “random conversations” of anti-state content.

What about Snowden's revelations? And the nightmarish plans of the State Revenue Service for knocking out tax arrears? Attacks of gays and lesbians on traditional family values? And censorship in the media?

“Obama is the most incompetent president after Jimmy Carter,” said Louisiana Governor Bobby Jindal. - Recent events have shown that Obama lost a sense of reality. Obviously, we need a strong America, but he claims a reduction in our armed forces, but he brags about the increase in spending on food stamps. ”

The famous Senator John McCain also spoke out. According to him, "Obama is not a scoundrel, but just a fool."

Analysts fbii.org laid out Obama's behavior on the shelves. He says one thing and does the opposite:

“Let's say, by signing a plan for the withdrawal of troops from Afghanistan, he immediately increases the size of the American contingent.

By abolishing imprisonment without trial, he expands the use of combat drones against persons suspected of involvement in terrorism.

Declaring the maximum openness of the administration, he meets with the press less often than the last six of his predecessors.

Speaking for strict observance of constitutional civil liberties, he authorizes the development of new spyware programs for the NSA to interfere with the privacy of millions of citizens. Etc.".

We are on our own to add to the list the cold war with Russia instead of the declared “reset”.

No, this is Mr. President not schizophrenia. This is a weakness. Faint-heartedness, often with a complete lack of understanding of the situation. Hence the inability to make a decision. Apparently, Obama is neither fish nor meat. And he is empty in the head. So we get: words closely, but thoughts are spacious ... (Nekrasov did not mean that, but we mean that.)

Site analysts cite the opinion of one professor of psychology. Drew Westen notes that "the destructive gestures of compromise have become the hallmark of the Obama presidency." All because of, perhaps, the lack of political experience of this president. B. Kh. “Achieved very modest success: before he decided to run for president, he never led a business and did not work in the executive branch. He made an unremarkable career as a law professor, without writing anything other than autobiography, for 12 years working at the University of Chicago, and in representative bodies he preferred to shy away from difficult questions, often without voting either “yes” or “no.”

And columnist Peter Vener, who worked in the administrations of the three presidents, believes that B.H. Obama is “unusually dogmatic, immune to other people's evidence and for the most part unable to correct his views in accordance with the circumstances. Therefore, when his worldview is faced with reality, he often falls into a stupor. Instead of an adequate reaction, he creates his own illusion. ”

As a result, we add to this, we have something like a Martian president. He knows little about the Earth, and of that he remembers almost nothing. Often doing the opposite of what he proclaims, and disclosing to the whole world nonsense, composed by some unenlightened speech writer, this Martian, instead of admitting mistakes and apologies, continues to insist on his own blunders and stupidities.

Former Ambassador McFaul (a type very close to Obama in spirit) was not worth all his short career in Moscow to be surprised at “anti-Americanism”, but he had to sit with Obama in the Oval Office for a beer jug ​​and make a list of two columns: “Said” and “Made ". Maybe after the eighth glass both would be able to understand that “anti-Americanism” is the most common answer to “exclusivity”, and the “leading role of the international community” is not the same as a referendum.