Alexander Lukashenko: “We foresaw that we would be“ crushed ”purposefully and methodically” 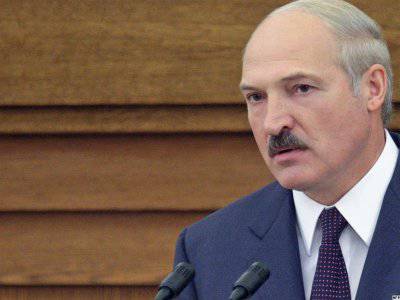 President of Belarus Alexander Lukashenko has linked the terrorist attack in the Minsk metro 11 of April with the situation in the food and foreign exchange markets. The leader of the republic is confident that a targeted campaign of destabilization is being waged against Minsk.

“Before the presidential election, we foresaw that we would be crushed, purposefully and methodically, to destabilize the situation. And so it happened: first in the foreign exchange market, then in the food market, and then pulled into the subway. The whole chain ", - Interfax quotes Lukashenko.

At a meeting on current issues of the socio-economic development of Belarus, the president accused the heads of departments of the lack of independence and inconsistency of actions to combat the negative consequences of difficulties in the foreign exchange market.

“It is sad that the president has gathered representatives of the government and the National Bank and are waiting for some additional decisions. Can't you decide for yourself, come to an agreement and make an agreed decision, even if it is unpopular? The president said his word, but why are you waiting for some more instructions? ”Said Lukashenka at the meeting.

According to some media reports, an explosion in the subway, which according to the latest data took the lives of 13 people, was linked to the economic problems of Belarus and some Internet users. They considered that in this way the authorities tried to distract the population from the financial and economic problems of the republic.

However, Lukashenko saw the cause of the tragedy at the Oktyabrskaya station not only in aggression from the outside world. According to the president, the authorities "played in democracy" and "got the result." “I will say an unpopular thing: stop playing in all sorts of reasoning and democracy. You go to the production, whether it is the deputy minister of commerce or another department, this is a concrete job, and there is a complete dictatorship of technology. And we are the cogs of this technological chain ... I want you to understand one thing: there are no pure economic theories and life corrects everything, ”the REGNUM news agency quotes Lukashenko.

“Ate democracy. There is nothing to cover here, and I am also to blame, but you also very much wanted to take it under control ... The same market economy ate ... Competition in everything and should always be, starting from the economy and ending with social and political issues ", - added president.

On the eve, 14 of April, Lukashenko has already declared that “the democracy imposed by the West” brought only misfortune to the republic. He urged law enforcement agencies to "interrogate all (oppositionists), despite all the cries and groans of foreign sufferers." At the same time, the president accused Western human rights organizations of "dancing on the bones": "It has come to blasphemy: we have a tragedy, and our so-called" European partners "in Strasbourg talk about some human rights ... And our homegrown ( the oppositionists - the fifth column - are calling for the imposition of sanctions. ”

15 April became aware of the warning that was issued to the opposition Belarusian newspaper Nasha Niva for inaccurate information about the attack. Media reported that the injured student in an explosion, Marina Shubich, was at the metro station after all the injured were removed. RIA "News"Informs that according to the authorities, this information" causes public harm and discredits public authorities, rescue and medical services that took part in rendering assistance to victims of the terrorist attack. In the prosecutor's office, refuting this information, they noted that Shubich was hospitalized in 18 hours 25 minutes, and after 15 minutes the doctors had already begun the operation.

In addition, the warning was received by the newspaper “Narodnaya Volya”, the editorial office of which was searched directly on the day of the terrorist attack.