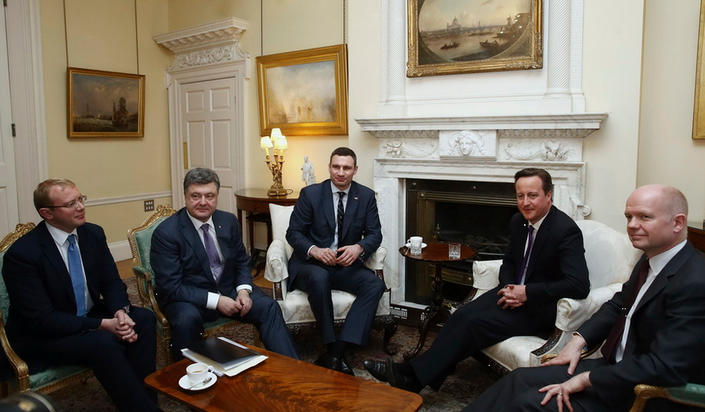 The attention of the European expert community on the problems of international relations was attracted by the publication in the latest issue of the generally well-informed French online publication “Courrier Diplomatique” (Diplomatic Courier). Under the title “Cameron’s Game,” former high-ranking French foreign minister Marc Levi, citing a confidential source surrounded by British Foreign Secretary Haig, reveals the essence of the talks behind closed doors that took place on March 26 in London. On this day, in Downing Street, Petro Poroshenko and Vitali Klitschko met with British Prime Minister David Cameron and Foreign Secretary William Hague.

According to Mr. Levy, the main purpose of the meeting for the British was to convince Klitschko not to participate in the presidential race and to support Poroshenko in the upcoming elections. Therefore, only these two politicians were invited for a confidential conversation with the British Prime Minister, who promised full support to Petro Poroshenko in the May 25 elections.

Poroshenko gave Cameron a firm guarantee in the event of a victory in the elections to immediately begin a fundamental rapprochement between Ukraine and NATO with the unconditional prospect of gaining membership in the North Atlantic alliance. All the more so in the unanimous opinion of Poroshenko and Cameron after the events in the Crimea for this there was a unique and extremely favorable opportunity.

According to the French diplomat, the meeting and this confidential agreement were personal initiative of Cameron, which was not coordinated with the White House.

Levi believes that there were three motives for such an initiative by the British prime minister:

The traditional confrontation between London and Moscow, which originated long before the Crimean War (1853-1856), was the culmination of this confrontation. And now London cannot forgive the fact that Moscow refused to extradite A. Lugovoi, accused by Scotland Yard of polonium poisoning with V. Litvinenko, a former FSB officer, etc.

Cameron took this initiative without consulting the White House, since there is an “Atlantic rivalry” between London and Washington. Cameron is "jealous" - he is oppressed by that second role in the dialogue with the Kremlin, which is now clearly taken by the White House to the owner of Downing Street. Pushing Kiev toward NATO, Cameron hopes, will make the puzzle of current US-Russian relations even more difficult to solve.

And finally, Cameron is experiencing a similar jealousy towards the unconditionally special relationship that exists between Merkel and Putin. The extremely negative reaction of Moscow to the turn of Kiev towards NATO will become the problem that will first of all be solved by Berlin as “looking” over the European Union and its relations with its neighbors.
The author of the article “Sourrier diplomatique” asks a reasonable question - what, however, was it necessary for Cameron to demand from Vitaly Klitschko the support of Petro Poroshenko if the latter is already the favorite of the presidential race?

According to Mr. Levy, Poroshenko’s possible victory in this case already in the first round will give him a very strong legitimacy, the right to speak as if on behalf of all Ukrainians. In this case, the breakthrough to NATO will not look like a gamble of the newly elected president, but as an expression of the will of the entire Ukrainian people.

Secondly, Levi believes, London has big doubts about the candidacy of the “Batkivshchyna” leader. "On the banks of the Thames, - writes the diplomat, - they know history Yulia Tymoshenko’s special relationship with the Kremlin (the result of which was the famous gas contract, etc.) - and they suspect that she may be a misguided Putin cossack who has repeatedly expressed dissatisfaction with the verdict issued by the ex-premier by the Ukrainian court. The current warlike rhetoric of Tymoshenko is just a smoke screen ... ”

Unfortunately, the author does not give an answer to the most interesting, perhaps the question: "And what was nevertheless promised by the West to Klitschko." After all, does not the same reward for such self-sacrifice guarantee the receipt of a troublesome position of the Kiev measure?