Mikhail Zadornov: the smell of the West. Part of 3 (continued) 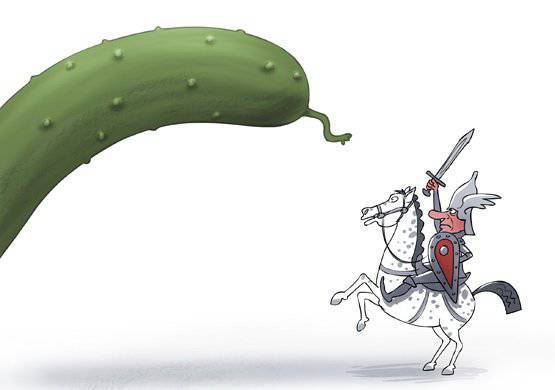 The strict EU rules regarding the type and quality of products, introduced in 1980's, were called cucumber, because of the absurd requirement for cucumbers to bend no more than 10 mm. The same instructions prescribe the correct size of eggplants: in one package, the difference between the largest and the smallest vegetables should not exceed 20 mm for oblong eggplants and 25 mm for round ones. Pears should be no less than 56 mm in diameter, the same diameter is required from peaches. Standards for fruits and vegetables were introduced in order to facilitate packaging and transportation. For many years, these tough rules were a popular argument against opponents of European integration.

Now, instead of 36, the EU proposes to regulate only ten. In the near future, this initiative will be put to a vote in the European Parliament. Producers will be able to independently divide into two varieties, and not throw out a number of vegetables. But for apples, citrus fruits, kiwi, lettuce, peaches, nectarines, pears, strawberries, sweet peppers, table grapes and tomatoes, standards will remain.

Quite a reasonable initiative by the European Commission came across unexpected resistance from some EU member states. Germany, France, Hungary, Italy and Spain are against such changes. They believe that existing standards are a compromise between consumers and manufacturers. According to Fisher Boyle’s entourage, the European Commissioner was very surprised by this position, because food prices are rising, and second-class goods could improve the quality of life of poor people. So she decided to push her own initiative. The mood in the European Parliament is such that Fisher Boyle can win.

Most pleased with the innovations in Britain. “Well, finally, we can buy crooked cucumbers in stores! Hurray to the European Union! But I guarantee that Euroskeptics will now start shouting that Brussels infringes on their rights to buy even cucumbers, ”former British Minister for Europe Denis McShane told Reuters.

Bananas should be of a normal bend with no visible defect. A second-class product is allowed to have appearance defects.

Cucumbers should be bent no more than 10 mm for every 10 cm length. The second class is allowed to double the rate

Carrots with a diameter of less than 1,9 cm should be labeled as “dwarf” or discarded.

Latvian public figure and candidate of the European Parliament Normund Ozolins - excerpts from an interview with the portal "Window to Russia".

“The rules for joining the EU are not hidden from anyone, they can always be known in advance. Before joining the EU, all candidate countries sign commitments to adhere to a common European policy in one area or another, to have a functioning market economy, and its producers to be “sufficiently competitive” to work in the conditions of the European Union. In the market sphere, the conditions for joining the EU are the rejection of “soft” banking restrictions, reduction of the state budget deficit, abolition of the state monopoly on exports, free entry to the market, removal of subsidies for goods sold, privatization of enterprises, the autonomous position of the Central Bank, the introduction of an effective tax system ... .

But in fact, everything turns out to be exactly the opposite! Upon entry, the old EU members imposed very harsh conditions on newcomers. They concerned the restriction of production in agriculture and industry. And often it was done in a hidden way - through strict standards. If a pig is fed not according to the ration or schedule of the EU, it is rejected, and selling it even on the domestic market is already very problematic, often completely impossible. If the shape, color and size of a tomato, cucumber or pea do not meet EU standards, products are rejected and destroyed. ”

“A number of Lithuanian pig farms were threatened with closure due to the lack of pigs ... toys!”

“What is the result of blindly following EU rules?” Our country was flooded with imported food of far from better quality, displacing our own, which is much tastier and healthier. The EU dictates what kind of vegetables and fruits we should bring into our country. The first restriction Latvia received after joining the EU was bananas. We began to buy them in the framework of European quotas, and only at the rigid prices of the EU. Dear and not the best quality.

We got idiotic standards for the shape and size of vegetables and fruits, which are allowed to sell in stores. A crooked cucumber or a small apple is not a product! But unrealistically ideal-shaped fruit pumped with chemicals so that they do not rot for months is exactly what we should happily eat ... Besides, Latvia, since in the West we are classified as third world countries, does not receive products of the highest quality - only second-class and below (who does not believe, can see the price tags in any supermarket - small “2 grade” is written on almost everybody). It is also sad that almost all trading networks in our country are strangers. ”

“In the early years of their stay in the European Union, all the Baltic countries had surplus stocks of agricultural products: dairy, meat, vegetables, and wine. All this abundance was accumulated prior to joining the EU and with its presence it kept food prices down. But the cunning Brusselsians invented fines on this - in 2007, the European Commission fined Lithuania, Latvia and Estonia with 3,182 million euros each. The grounds - in the negotiations, the acceding countries pledged not to create stocks of products. ..

And to take the same quota of milk - you can not produce dairy products more than allowed by Brussels. This is done to ensure that there is no overproduction in the EU. What is this free market? But this very overproduction would inevitably cause a decrease in prices for dairy products. But prices are rising, and cows are not allowed to breed more. Yes, and to our very milk, EU officials have big complaints, it also does not fit into European quality standards - too ... fat. ”

“When joining the European Union, Latvia lost all of its sugar factories in Liepaja, Jekabpils, and Jelgava. They completely covered the domestic market, product quality was much higher than imported sugar, and they provided jobs for 330 farms, not counting other related industries. In fact, sugar used to be produced in 23 EU countries, and now all plants in Latvia, Portugal, Ireland, Bulgaria and Slovenia are closed - this is how the EU gets rid of competitors. Since 2009, Riga has been trying to get the right to produce sugar again. A proposal to open at least one sugar factory was sent to Brussels, but the European Commission decided that the emergence of sugar factories in Latvia was excluded.

We should not forget the fishing quotas: a huge number of fishing vessels were sent to scrap metal, and the fishermen were forced to leave the country in search of new work. ”

“According to the EU norms, the state has no right to support a single manufacturer. The state can help enterprises only in three cases: in innovative programs, programs for the protection of nature and ... in closing the enterprise. As a result, experience has shown that joining the EU in any country leads to the closure of industries, the elimination of agriculture, the cutting of livestock, the cutting of wood and the looting of other natural resources by foreign companies.

Moreover, if it is in spite of Brussels to start sowing empty fields, then the EU has a so-called “correspondence tax”, which the authorities are obliged to levy recalcitrant peasants and deduct it to Brussels, but then the proceeds for the crop do not cover the costs.

And this is not the only barrier in the EU: among other things, the EU countries transfer 75% of the amounts of duties withheld to the EU budget, keeping only 25% for administrative expenses. Huge amounts of customs fees flowed to Brussels past the national budget. Commodities - fuel, mineral products, metals, plastics and products from them, chemical products - after Latvia’s accession to the EU come to us at much higher prices. At the same time, they also quota.

And one more nuance: in addition to the EU destroying our industry, those enterprises that still miraculously remain afloat, selling their products outside the EU markets (for example, in Russia or China), are forced to put up with higher duties on their products. "

“Another echelon of protection of the EU market from manufacturers of countries“ beginners ”is exorbitantly high prices for electricity and energy carriers. It also dramatically increases the cost of production, making it noncompetitive. In all actions with regard to the “newcomers” countries, the desire of Western partners to completely eliminate even the theoretical possibility of developing something in the energy sector is clearly visible. For example, Bulgaria was an electricity exporter - it sold electricity to Turkey, Greece, Macedonia, Albania, and Italy. This was possible thanks to the only Kozloduy nuclear power plant in the country. As soon as Bulgaria began negotiations on joining the EU, it immediately received a tough condition: it must first close the 4 power unit from 6 at the NPP, and later completely eliminate the station. All conditions have been met. Now Bulgaria buys electricity on the foreign market many times more expensive than its real value.

Further more interesting - plumbing and sewage sold to the French, the Czechs, Austrians and Germans, the copper mines went to the Belgians. The gold mine was sold to a Canadian firm, and now the state receives only 2 percent of the volume. But the entire mining accounting is classified, and it is not known from what amount these 2 percentages count.

Bulgaria’s agriculture has also been destroyed. At one time, the “world's best tomato republic” does not produce tomatoes at all! Up to 80, percent of all fruits and vegetables are imported, and Bulgaria has become the most impoverished country. ”

Ctrl Enter
Noticed oshЫbku Highlight text and press. Ctrl + Enter
We are
Mikhail Zadornov: the smell of the WestList of destroyed the largest and most high-tech enterprises
Military Reviewin Yandex News
Military Reviewin Google News
29 comments
Information
Dear reader, to leave comments on the publication, you must sign in.