Allied agenda: the US hastily open against us "Moldovan" and "Kyrgyz" fronts 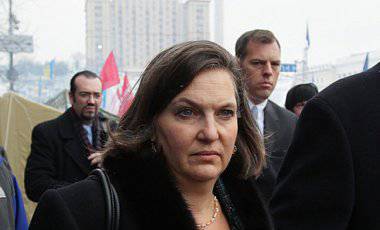 Against the background of the Ukrainian crisis and the loss of the Crimea by the provisional Kiev government, the impression was that the US strategy began to fail in the post-Soviet space.


In a burst of patriotic frenzy, all attention was concentrated on Kiev and Ukraine, and to such an extent that US Vice President John Kerry turns the plane around to talk with Sergey Lavrov.

However, as long as our attention is focused on Ukraine, our pale-faced brothers are playing a new combination.

For example, a landing party headed by Assistant Secretary of State Victoria Nuland landed in the capital of Moldova, Chisinau, which became widely known after distributing buns on Euromaidan and the legendary phrase “Fuck the EU”, which clearly defined the hierarchy of relations between the US and the EU.

Together with Nuland, Brigadier General Randy Key, Head of the Planning Division of the US Armed Forces in Europe, arrived in Moldova. It can be assumed that it is General Randy who is the main actor, because Nuland’s main message is for Chisinau elitarians: “The United States brought 10 million dollars to“ border security. ”

The next day after the visit, Nuland is expected to arrive in Chisinau the heads of the foreign ministries of Romania and Canada. Probably, to consolidate the agreements reached and repeat instructions.

If we take into account the incidents in Transnistria, around which the blockade ring is compressed every day, it becomes clear for what purposes the notorious 10 million dollars are allocated. Moldova, whose army is in an even worse condition than the Ukrainian one, this amount will not allow “strengthening the border”. But to organize a full-fledged blockade of Transnistria and the local elitist’s fee is quite enough.

If we take into account the special agreement on the provision of military assistance between Chisinau and Bucharest, we can assume that Romania, not Moldova itself, will be the key player. Chisinau elitist only perform an intermediary function, for which the infamous $ 10 million are intended.

Interestingly, in parallel with the activity in Moldova, another assistant secretary of state - Nisha Bisoul - planned a visit to Kazakhstan and Kyrgyzstan (from March 31 to April 2). Obviously, the tasks of the State Department in the Asian part of our Eurasia are similar to those of Moldova.

But if in Kazakhstan the pale-faced brothers are forced to act cautiously and take into account that Nazarbayev is the second most important ally of Moscow after Lukashenko, then in Kyrgyzstan you can act almost directly and without hiding interests.

So, for example, the self-named leader of the Kyrgyz opposition, deputy of the Jogorku Kenesh, Ravshan Zheenbekov, practiced at the Kiev Euromaidan and does not hide the fact that the true purpose of the visit is to adapt the Ukrainian experience. And the oppositionist Ravshan did not appear yesterday, but is an open fighter for American interests and directly lobbied for the preservation of the Manas airbase for the US Army.

It is clear that no one in the United States considers elitarians from Bishkek and Chisinau as allies or at least junior partners. Moldova and Kyrgyzstan are simply an excellent training ground for a full-scale political crisis. Such is the temporary misalliance.

Both republics are already in a pre-chaotic state. Kyrgyzstan after the withdrawal of the Ata Meken faction from the coalition agreement is in a state of sluggish parliamentary crisis. In fact, in Bishkek, there is currently no full-fledged executive authority and a cabinet of ministers, which for a parliamentary republic means mild powerlessness.

The situation is similar in Moldova, which is also a parliamentary republic. Parliamentary elections are scheduled for the autumn, at which the issue of power in the republic will be decided. Any election is a cold form of civil war, and in the conditions of militarization and chaos, they always risk developing into a full-fledged conflict. Against the background of the weak chances of a “democratic alliance” to win elections without fraud, the issue of power in Moldova will soon be very acute.

Unlike the pro-Romanian Moldavian elitarians, the State Department is playing a win-win game - in Chisinau, in Bishkek. Because the ultimate goal is not at all external control over the elites, but provocation of chaos. Moreover, the ideal situation would be the creation of a situation of two or even a tripartite in the republics - according to the Kiev scenario.

The initial parameters for the power are already ready. In a referendum, Gagauzia expressed its unanimous “no” to the official Euro-integration course of Chisinau in a referendum. In Kyrgyzstan, there are problems with the southern regions of the republic, which are in permanent border crisis with Tajikistan and Uzbekistan and are poorly controlled by Bishkek. Add here the interests of the Central Asian drug barons, radical Islamists and the withdrawal of US troops from Afghanistan - everything is ready for chaos in the region.

So, the “Ukrainian crisis” does not fade at all, it just begins to give metastases in other regions of our part of Eurasia. The main goal is to open new fronts for Russia and the allies and to defocus attention.

Therefore, the only correct conclusion from the situation would be to stop considering the “Ukrainian crisis” as a separate phenomenon. Kyiv Euromaidan is just an episode, let it be the brightest, in a big game for Eurasia. And the ultimate goal of this party is the destruction of the emerging strategic Russia-China alliance. Because only such an alliance is able to guarantee security on the continent and force the United States to return to the provisions of the Monroe Doctrine.