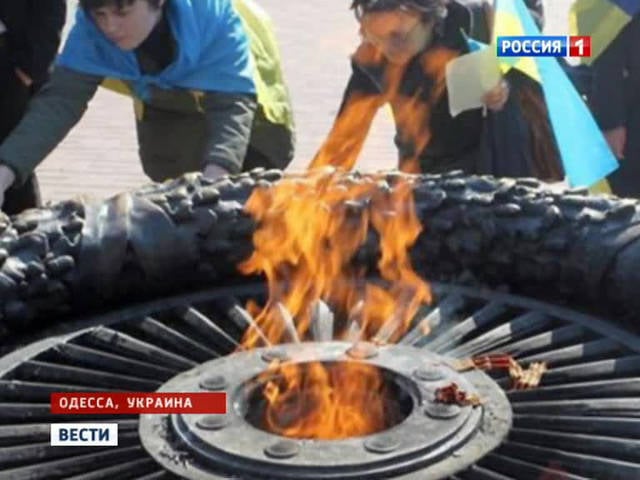 Several St. George ribbons burned in Odessa on the Eternal Flame at the monument to the Unknown Sailor, spokesman for the regional organization of the party "UDAR" Alena Balaba. The photos of this on the Internet have already caused a scandal.


The actions of Alena Balaba were condemned by journalists, politicians and even activists of the Odessa Maidan, Interfax notes.

Alena Balaba is sure that she did the right thing. “Yes, I’ve burned three Colorado ribbons in the Eternal Flame today. And I did it because it’s a far-fetched symbol, not a Victory Ribbon, invented by Moscow-based PR people. By the way, I know the name of the lady who personally created it. She comes from Novosibirsk, her grandmother is Uzbek. A good person. At that time, she didn’t have enough brains that they didn’t put the Vlasov tape “symbol of Victory.” It’s not a symbol of victory, but bluff and treshak illiterate Putin PR people. - the purest Goebbels propaganda. Now in Ukraine - a symbol of invaders, occupiers. What to worship? Something I do not understand your hysterics, "- wrote the press secretary of the Odessa branch of the party" UDAR "on her page on Facebook.

“Alyona Balaba is not a member of the UDAR party. Yes, since the beginning of the revolution we have not taken any personnel decisions and formally she is the press secretary, but in fact she works offline. The UDAR party does not support these actions. People came to Alley of Glory, to kneel down and honor the memory of all the defenders of our country, "said Andrei Yusov.

Several thousand pro-Russian 30 activists in March 2014 of the year came to the monument to Duc de Richelieu, where Maidan supporters traditionally gather. As a result, clashes ensued, and the few Maidan residents who remained after the completion of the events were forced to retreat behind the backs of the policemen.

Burning St. George ribbons only aggravates the situation in the Odessa region.

"Why is this now? Does this mean that this is your common position? Why did you go to the Walk of Fame, behind this? This is the country's unification?", Natalia Perevalova, editor of 7 Odessa television channel, resented on her Facebook page.

"We brought flowers to the monument to the Unknown Sailor to honor the memory of the heroes who defended our freedom. There was a moment of silence and the knees of men bowed. All people on the Maidan are unequivocal in their estimates of the heroic deed who defended Odessa. I did not see anyone burned. If the fact took place, then you need to ask her what Alena wanted to express by burning the tape, ”said the leader of the Odessa Maidan, the head of the Odessa party organization Democratic Alliance, Alexey Cherny.

The leader of the party "UDAR" Vitali Klitschko has not yet responded to the information about the burning of St. George ribbons.