There are dual citizenship - write letters 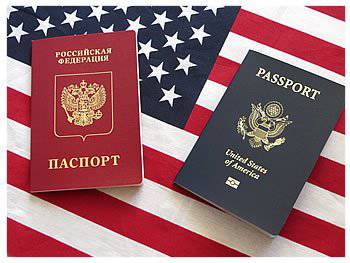 None of the Russian citizens is prohibited to have a second citizenship (citizenship). This fact is stated in the article 62 of the Constitution of the Russian Federation. Here, in fact, is the material from the mentioned article:

2. Having a citizen of a Russian citizen of a foreign state does not detract from his rights and freedoms and does not exempt from obligations arising from Russian citizenship, unless otherwise provided by federal law or an international treaty of the Russian Federation.

Some time ago, Russian lawmakers decided to oblige individuals who receive dual citizenship (citizenship or citizenship of a foreign state while retaining Russian citizenship) to notify the special state authorities. Initially, this initiative was voiced during the conversation of President Vladimir Putin with senators, during which the head of the Committee on Legislation of the Council of the Federation of the Federal Assembly of the Russian Federation, Andrei Klishas, ​​made a proposal specifically for individuals with dual citizenship to tell about their second citizenship to the state. Vladimir Putin, after the statement by Andrei Klishas, ​​noted that it is worthwhile to work on this initiative, but without excesses, adding:

... should know who lives in Russia and what they do.

The other day with the same initiative, a deputy from the LDPR faction in the lower house Andrei Lugovoi. He carried out work on the preparation of the bill, which, apparently, in the near future should go through hearings in the State Duma. The draft law is reduced to the introduction, no less and less, of criminal liability for concealing the fact of dual citizenship for citizens of the Russian Federation. The bill, according to the idea of ​​the deputy from the LDPR, should work as follows:

a citizen of Russia, having received a passport of a foreign state (with the preservation of a Russian passport), must within a month from this moment inform in writing “the relevant territorial authorities” (as an example, the FMS of the region is given). If a citizen already had dual citizenship before signing the relevant law (let us call the bill a Klishas-Lugovoi bill), then he (the citizen) will be obliged to notify in writing all the same Federal Migration Service (its regional administration) within three months after the law enters into force. ). If no notification is received from citizens with dual citizenship before the expiration of the said deadlines, the responsibility will be as follows: fine in the amount of 200 thousand rubles, or fine in the amount of earnings received up to one year, or mandatory work for up to 400 hours. Such excerpts from the bill represents Kommersant.

Such rules are also mentioned in the 6 article of the Law on Citizenship. The same article makes some exceptions in those cases that are separately stated in international treaties signed by Russia. Another thing is that in respect of far from all countries of the world, Russia recognizes dual citizenship. In a number of cases, the Russian Federation defines dual citizenship simply as a “citizen of Russia”, not paying attention to having a second passport. Because of these subtleties, it became necessary to introduce a full-fledged civil accounting.

As soon as the “masses” left the first words of the lawmakers about the need to notify the FMS about the dual citizenship of the Russians who have such citizenship, immediately representatives of the hyper-liberal community, as if on cue, scored their alarm: “Guard! Parliamentarians deprive Russians of the right to have a couple of passports! This is arbitrariness! This is a violation of human rights! This is the middle ages!

Whether the gentlemen, who think in this way, did not deign to get acquainted with the bill, or familiarity with the document for them is altogether superfluous, but the fact remains that there are a lot of shouts, there is much less sober reflection ...

In fact, the presented bill is not something out of the ordinary. What, in fact, is so terrible, if a person is obliged to inform about his dual citizenship. There is more than enough time for such a message. All the work fits into the following algorithm: type text with passport data, print it out in several copies, send one copy to the post (you can electronically send it to e-mail) of the Federal Migration Service for the region, make sure that the letter is registered - that's all.

If this is a violation of human rights, how does such a “violation” differ from the need to pay taxes or declare movable and immovable property? How does it differ from entering data about children (both born and adopted) into a citizen passport? Is the initiative to inevitably deprive a person of dual citizenship? Is it to oblige him to leave only a Russian passport? No, of course. The whole initiative is quite a common practice, in which population and its, let's say, state affiliation are recorded. If a person persistently tries to conceal the fact that he has dual citizenship - so this is no accident ...

At the same time, one should not forget that dual (second) citizenship today is not provided for state officials, military personnel, and law enforcement officers. This is a peculiar form of nationalization of the Russian power elite. But a person with dual citizenship today and so perfectly aware that he did not become a minister, deputy or head of the regional administration. There are, however, those who do not understand this fact. And yet there hasn’t been any effective method for bringing such “non-understanding” gentlemen to clean water until now. The only thing that threatened them for concealment was dismissal from the government post. After the approval of the new law may appear at least some tool. Of course, 200 thousand rubles a fine for such persons - zilch, but still a precedent, at least informational, will, and therefore, those who want to "persist in not understanding" will obviously be less.

How does the new bill threaten ordinary Russians (who do not claim gubernatorial, ministerial, and other powerful posts) who have dual citizenship (and there are quite a few such people in Russia and abroad)? Yes, nothing threatens. How does it hit their wallet? It does not hit, since they are not deprived of any of the rights of a citizen of the Russian Federation on the basis of paragraph 2 of article 62. No one is going to cut salaries, pensions, scholarships, other cash payments due to the citizen.

As already mentioned, the main goal of the law is to create an information field, which will be primarily aimed at the nationalization of elites. In addition, the law with the rational performance is able to form a high-quality information segment concerning the civil field. Indeed, today not a single controlling authority is able to say exactly how many Russians with dual (second) citizenship live in the territory of the Russian Federation, which even at the theoretical level allows people with two passports to participate in the management of both regions and the country generally. And in today's times this state of affairs is quite capable of striking, if not for the national security of the country as a whole, then for the interests of a single region for sure. From the latest precedents: Vitaly Malkin - ex-senator from Buryatia. He received the prefix "ex" after it became known that Malkin also had Israeli citizenship in addition to his Russian citizenship. Whose interests Vitaly Borisovich defended in the upper chamber more actively - the Buryat or Israeli - the question ... It is to ensure that there are no such questions in the air that the draft law on notification of dual citizenship appears on the agenda. Why today? So circumstances ... As an option, they appear precisely because in the future, foreign influence forces could not crush Russia through those who possess several passports and closely link their activities with the economy or politics.

This is a kind of continuation of the law on “foreign agents”, but already in the form “for individuals”. If a person does not intend to use his dual citizenship for certain dubious (including selfish) purposes, then notifying the FMS about the existence of two passports for such a person will definitely not become something deadly. Well, and if a person suddenly raises the uproar, then why would it ... What kind of rights do he have, sorry, pinched? ..

By the way, how are things in other countries with dual citizenship? Half the world is not nearly as democratic as the Russian Federation. Dual citizenship at the legislative level (with the exception of some special cases) cannot be obtained in such countries as China, India, Chile, Norway, Indonesia, Cuba, Saudi Arabia, Vietnam, Denmark, Egypt, Japan, Ukraine and a number of others.

But in the United States, dual citizenship is not prohibited by law, but for a person who has dual citizenship, there is an interesting practice. Even if this person lives on a permanent basis in another country, he will pay taxes to the American treasury (in fact, double taxation. As they say, a complete triumph of democracy and justice: if you want a second passport in the form of an American - for God's sake, but also taxes “Second homeland” kindly send it off regularly ...

So, the Klishas-Lugovoy initiative in comparison with examples from world practice is the top of humanism ... Write a letter to the FMSA and walk even with all your passports in your pockets, breathing deeply in the air. It's a pity to spend the envelope - lay out 200 thousand rubles ... What problems? .. That's just if there are any difficulties in identifying those who do not want to write letters, and it will begin to swear that he has one passport, but in fact the second "passport" is in caches just in case of fire? There is no need to do without international contacts at the diplomatic level to obtain relevant information.

Ctrl Enter
Noticed oshЫbku Highlight text and press. Ctrl + Enter
We are
Results of the week. "Enter the ambassador citizen!"Memo to mercenaries in Africa
Military Reviewin Yandex News
Military Reviewin Google News
93 comments
Information
Dear reader, to leave comments on the publication, you must sign in.