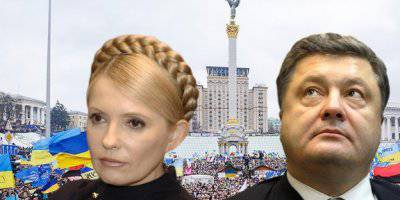 In order not to distract the attention of the respected members of the forum in scattered and short messages, I decided to present in this review new-old presidential candidates. I will not mention those who have already been discussed in great detail, and those who are very uninteresting.


So, after the congresses of numerous Ukrainian parties (and we have more 200 !!!), the following figures were added to the list of thirsty ones.

«The leader of the nationalist group "Right Sector", which became the party last week, Dmitry Yarosh on Saturday submitted to the CEC documents for registration as a presidential candidate in the early elections, which will be held on 25 in May.
According to UNIAN, Yarosh brought a full package of documents, including a certificate of making a cash deposit in the amount of 2,5 million hryvnia (228 thousand dollars at the current rate). He filed documents with the CEC as an independent candidate. ”

Apparently, given that the early ripening party, which failed to take the parliament by storm, may even be banned for "bad behavior," Yarosh decided to go as an independent candidate. That, however, does not completely change his views.

«Delegates to the All-Ukrainian Svoboda Association unanimously put forward a single candidate from the political force for the presidency of Ukraine, Oleg Tyagnibok. “We will definitely win,” commented on his nomination. After that, the delegates of the congress chanted "The Fagnibok!"

The commitment of the party to short, even monosyllabic slogans attracts attention. “Ganba!” Is chanting in parliament (if someone spoke Russian). On the Maidan - "Gang - get out!" At the congress - "Pyagnibok!"

Fans can argue the question: either only one gyrus remained in the brain, or they were forbidden to say anything else! Suddenly something like “moskaliv on knives will blurt out! Or beat the liquid! ”And Europe does not approve of this! Even had to apologize! It remains only still “Glory to Ukraine! - Glory to heroes!"

«The leader of the Civic Position Party, an extra-factional people's deputy of Ukraine, Anatoly Gritsenko, decided to run for president of Ukraine. He wrote about this on his Facebook page. “The decision has been made - I’m going to the presidency. This is the decision of our Party’s Civic Position congress. I’m going to the CEC to hand over documents. Thanks to all members of the same party for their trust and support,” he wrote. ”

Clear and short! In a military way! Of course! The Minister of Defense of Ukraine (in three cabinets of ministers in a row - Yulia Tymoshenko, Yuriy Yekhanurov and Viktor Yanukovich, 2005 — 2007)! How many generals, it turns out, we are sitting in the Rada, I didn’t know. And only Gritsenko boldly and resolutely criticizes them all, and passionately asks Tymoshenko to influence Turchinov to put him, Gritsenko, the minister of defense, or at least share with him the position of commander in chief! Not given, greedy! Now Gritsenko will go to the presidency! Uzho will show this and. about.!!!

Comrade Simonenko, we constantly take part in all presidential elections. And constantly loses them. However, "the post requires", although he is more and more like the famous heroine of vaudeville, who sang "I will crawl on stage on all fours, but the Sinichkin will not miss." Yes, and in the Rada, on behalf of the communists, he speaks personally to the CAM, or the word is given to the older communists.

Rђ RІRѕS, Olga Bogomolets - public figure. No, actually she is a doctor from a glorious family of doctors of God-worshipers. But, apparently, in some cases, the nature of the children really resting!

Apparently, the lady thinks that Ukraine will urgently need a venerealologist president and cosmetologist to look more decent before Europe! However, I doubt that the country only "redecorating" is required.

Royal - we have a girlfriend! In 2012, Natalya Korolevska, being the leader of the Ukraine Forward Party, could not go to parliament, and in fact dreamed that, as she became president, pensioners of 5 thousand hryvnias, who work for everyone, would receive European salaries The river with milk and honey ... Not chosen! But Yanukovych gave her the opportunity to try himself Minister of Social Policy of Ukraine. I tried ... That's why its current program rather modestly indicates the fight against corruption, the legalization of the economy, and the point about "do everything so that the rich and not the unprotected segments of the population pay for the reforms."

We have the most curious character - Lyashko (a radical party with an unknown number of people). The LGBT advocate, “a farmer from a plow”, then goes with a fork even to the show to Schuster, then a cow for BP leads ... however, what a business turned out to be !!! Why? Everyone can, but he can not?

“The deputy of the Lugansk regional council and the head of the“ Young Guard ”, Arsen Klinchaev, spoke about how he was abducted by Oleg Lyashko and his accomplices during the night. Klinchaev said that Lyashko and his people were detained in the office of the head of the Ministry of Internal Affairs in the Luhansk region, Vladimir Guslavsky, to whom he had come to the talks. The deputy said that Lyashko ran into the office with his assistant Vsevolod Filimonenko and six other people. Also with them were journalists of the TV channel "Ukraine". "I was tied up and taken out of the back door. The General (Guslavsky - ed.) Was nearby, watching this. A minibus arrived. On the way, they told me what to expect. They drove 30 minutes. Then Lyashko was called and he said:" We must return. " “We returned to the office of Guslavsky, where the current governor was sitting. Lyashko hesitated for five more minutes, as always, in his repertoire. He turned around with his team and left,” Klinchaev said. He also noted that Lyashko called himself "the owner of the Lugansk region".
According to Klinchaev, he addressed the head of the regional department of the Ministry of Internal Affairs, Guslavsky: "I asked: why are you doing this? After all, many knew that I was going to you. And if something had happened to me, everyone would have known. To which Guslavsky said: what can I do? This is a people's deputy. The governor said that they should have taken me to Kiev on a charter flight, "said Klinchayev."

The Prosecutor General's Office of Ukraine reviewed the statements of deputies of the Lugansk regional council regarding the actions of people's deputy Oleg Lyashko and the leadership of the Main Internal Affairs Directorate of the region. In accordance with the legislation, the applications were sent to the prosecutor's office of the Luhansk region with a proposal to inform the applicants about the review process. But the victim himself, Klinchaev, was arrested !!!

“Interior Minister Arsen Avakov reported on the arrest of a member of the Lugansk Regional Council from the Party of Regions Arsen Klinchaev. He wrote about this on his Facebook page. “Now detained one of the organizers of the seizure of the RSA and the separatist rally in Lugansk - Arsen Klinchaev. Natural result. However, this will decide the court. The question is how to respond to the video of yesterday's “civil arrest” of Klinchaev by people's deputy Oleg Lyashko, what is posted on the net ?! ”he wrote.”

I hasten to calm the faint of heart! In any case, nothing now threatens Lyashko - not only did he have parliamentary immunity, so now the immunity of the presidential candidate has been added!

From PR elected Dobkina! Although they do not like him in Kharkov, but what is the program!

“... the first bill that he introduces to the Rada will be a moratorium on business inspections by all regulatory bodies, except for tax, which will be allowed to do this every two years. He explained that this is due to the fact that Ukraine’s small and medium-sized businesses need urgent assistance.
He also said that the Crimea will return to Ukraine only when the inhabitants of the Crimea decide that the Ukrainian authorities are ready to hear them. “If one of the politicians worries about secession of the Crimea as a territory, I’m worried about millions of Crimeans in 2,5,” he stressed. Among other initiatives of Dobkin, which he outlined at the congress, is the transfer of maximum powers to the regions and the election of judges. ”

N-yes! Though Yanukovych and Azarov have been expelled from the party at the same congress, their cause is in bloom and fragrant! Well, not Tsareva choose, which did not come to the congress at all! And all that “does not say that”!

In her speech, Tymoshenko said that she would return the Crimea to Ukraine.

“We need to unite the country. Once a wise president said: stop fighting, the country needs to dress wounds. We should not ask each other questions that divide us. We united the Maidan. But Putin also united us: you look what is happening - Lviv speaks Russian, Donetsk - Ukrainian, to stop the aggressor, "said Tymoshenko."

Note that she said that in Ukrainian, then in Russian. Tymoshenko also announced her proxies, noting that they are "ordinary people from the Maidan." They are: the “field commander” of the Maidan, Sergey Mitrofansky, the doctor Maxim Ionov, and also the pensioner Lyubov Stepanenko, who “managed the food” on the Maidan.

Trustees are our everything! The guard, (so that no one would see how Julia “cheers up”), the doctor (just in case, who will announce her patient for urgent delivery back to Germany) and the manager. nutrition (with your favorite Yulina "additives"). I fully understand the thesis “we should not ask each other questions”! And then you have to remember that:

“Hired by the former head of the Ministry of Incomes Oleksandr Klymenko in order to return to Ukraine about the order of 4 billion hryvnia, derived from the country. This undertaking was, of course, branded. Vlasenko so directly and said: "It's all a lie and a provocation." And so the British found an account ...
Tens and hundreds of millions of pounds. British lawyers found 278 bank accounts in 26 countries that are associated with Yulia Tymoshenko and her family. According to Lawrence Graham, a London-based law firm that conducted an investigation, 13 from Tymoshenko’s established bank accounts are still open, ”polemika.com.ua reports.

And where now Yatsenyuk go? Try to demand to freeze or transfer money to Ukraine? Nu-nu! Then Julia will make all current requests! Better not to ask questions!

“Nikolay Malomuzh
The former head of the Foreign Intelligence Service of Ukraine, Nikolay Malomuzh, also submitted documents to the Central Election Commission for registration as a candidate for the presidency of Ukraine. ”

Here I am silent, intelligence, as well as the East, is a delicate matter.

So 21 challenger! (Thanks to “Polemics” for prompt reports from the scene.) And, perhaps, this is not the end! Until 4, April, there may still be "thirsty" announce!

Ukrainians are often reproached: who, they say, you have chosen! And who would you choose from such a list?