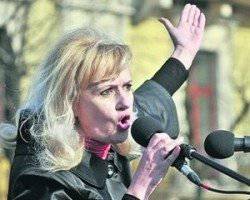 The central authorities in Kiev need to stop the unprecedented Ukrainophobia in the east of the country. This was stated today by the deputy of the Verkhovna Rada from VO "Freedom" Irina Fahrion, speaking at a meeting of BP.


According to her, a paradoxical situation has arisen, when it is constantly said about the protection of the Russian-speaking part of our population, which in fact needs protection only from the intrusive manipulation of its moods from abroad.

At the same time, Ukrainian-speaking residents of Kharkiv, Donetsk, and Lugansk regions are falling prey to gangster attacks and constant psychological pressure, she stressed.

She claims that in these regions it becomes dangerous to communicate in Ukrainian in crowded places, to have national symbols, to express out loud thoughts that are different from the slogans imposed by Russian media.

"The Maidan won, but we are still in the sheer darkness of the Moscow occupation. And this darkness is centralized and concentrated also here in the supreme terrarium. Our education system, written by students of the east and south, is almost destroyed and rests only on individual teachers. People-rays light in the Soviet darkness. However, the students themselves note that there are patriotic youth in the east and south, and they need support, "said I. Fahrion.

She also noted the catastrophic situation in Eastern Ukrainian universities, where teachers, at the request of nationalist students, refuse to teach in Ukrainian. And since such students of the entire 2-3 to the entire faculty, they cannot write a collective complaint to the university management and write to me, explained I. Fahrion. “This is a disgraceful situation that needs to be changed immediately. Therefore, our task is to crush Ukraine and begin the processes of Ukrainization,” she said.

As reported, the state archives of the Lviv region published the minutes of meetings of the party committee of the Lvov State University. I.Franko, as well as meetings of the committee of the Komsomol of this university, confirming I.Fahrion’s membership in the CPSU. In the characteristic given to her for joining the CPSU, it is said that I. Fahrion encouraged the study of the Russian language by foreign students.

Ctrl Enter
Noticed oshЫbku Highlight text and press. Ctrl + Enter
We are
Reports from the militia of New Russia for 29 August 2014 of the year
Military Reviewin Yandex News
Military Reviewin Google News
347 comments
Information
Dear reader, to leave comments on the publication, you must sign in.