Anatoly Wasserman: “Ukraine is a way of turning Russians into non-Russians and even into anti-Russians” 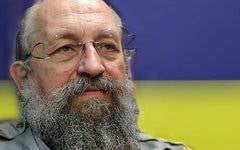 It can not exist except in a situation of conflict with the rest of Russia.


For a long time, Kiev decided for itself the question of where to go to Ukraine: to the West, by signing the Agreement on Euro-Association, or to the East, by joining the Customs Union. These fluctuations determined the political background in Ukraine, but after the “Maidan Revolution” Kiev found itself at an impasse: relations with Moscow deteriorated dramatically and there was no question of joining the Customs Union, however, the “long-awaited” Euro-Association was stalled.

- The position of Ukraine at the moment is rather difficult to characterize with censorship words, but I will try. Ukraine as an originally anti-Russian project, as a way of turning part of Russian into non-Russian and even anti-Russian, can not exist except in an atmosphere of continuous conflict with the rest of Russia. Naturally, there are a significant number of people and organizations that benefit from these conflicts and are therefore interested in maintaining them.

The peculiarity of the current moment is that now “professional Ukrainians” have completely seized power and have completely pushed aside those who were capable of constructive interaction with the rest of Russia. Now the "Project Ukraine" is not constrained by either economic considerations or the remnants of common sense. Like any unrestrained flow, this one will soon fall into the abyss.

So I do not expect from Ukraine in its present form any long existence. There people came to power, ready to kill, and I wondered if the Russian majority of Ukraine would be able to quickly calm down the “professional Ukrainians”, if there was enough self-organization. Or will the Russians wait for the fact that they will be sold into slavery to the West and killed right on the streets?

Russians, when they defend themselves, are very dangerous, but those who have seized power in a large part of Ukraine think only about the danger they themselves pose to others. I hope that the Russians are capable of organizing themselves without specially appointed leaders. They have repeatedly proved this ability and, I hope, will prove it before this self-organization becomes a matter of life and death in the literal sense of the word.

In Ukraine, presidential elections are coming, but there is absolutely nothing to expect from them for a very simple reason. The current composition of the Supreme Council of Ukraine by several decisions since February 28 made its activities legally null and void. No appointments made by this Council have legal consequences; none of its decisions, including those on the appointment of elections, also have no legal significance.

Whoever was declared the winner in these elections, anyway, the legitimate president of Ukraine until the end of January 2015, that is, until the expiration of his powers, remains Viktor Yanukovych. Until that time, much more will change. I think there will be new election orders and new candidates.

By the way, the militants of the "Right Sector" intend to stay at each polling station. So, whoever would be declared the winner by the militants of the Right Sector, who now control the Central Election Commission and the printing house where voting ballots should be printed, this “winner” will be such only in the eyes of the Right Sector and a few North American and Western European scumbags . They are still trying to pretend that there is a power in Kiev that at least resembles the legal one.

Ctrl Enter
Noticed oshЫbku Highlight text and press. Ctrl + Enter
We are
About Stalin and KhrushchevOn the other side of the “red” and “white”. Izborsk Club Report
Military Reviewin Yandex News
Military Reviewin Google News
51 comment
Information
Dear reader, to leave comments on the publication, you must sign in.