March 28 2014
110
(Thursday, 21 hour 07) Activists of the "Right Sector" storm the Verkhovna Rada. As can be seen from the broadcast of "Public TV", they brought the tires, knocking on the door of parliament, breaking the glass on the door. In addition, activists are shouting "Revolution", demanding the resignation of Interior Minister Arsen Avakov and send to the court of ex-Defense Minister Igor Tenyukh.

Before, an extraordinary Veche was announced on Maidan, dedicated to the memory of the murdered Sasha Bely, where activists decided to come every morning at 9 in the morning under the Verkhovna Rada, and every evening at 19.00 to gather at the Veche.

In the Verkhovna Rada, security has been strengthened in connection with the picket of the "Right Sector", the deputies have already left the building

In the building of the Verkhovna Rada of Ukraine, which on Thursday evening is picketed by representatives of the Right Sector, security has been strengthened.

As the Interfax-Ukraine correspondent reports, the guard of the parliament has concentrated at the entrance doors, has deployed hydrants and asks the inside journalists not to come close to the windows that overlook Constitution Square, where the protesters currently remain.

Vice-Speaker of the Verkhovna Rada Ruslan Koshulinsky went to the protesters. "These are representatives of the Right Sector, who informed me about their demands, in particular, about the resignation of the Minister of Internal Affairs Avakov from his post. They demand to do this immediately," he told reporters, adding that he explained to the protesters that at the moment it is impossible to do.

At the same time, in response to a question from journalists, whether there will be a meeting of parliament on Friday, the vice-speaker said: "Tomorrow the Verkhovna Rada is working in a regular mode."

Currently, in the building of the Verkhovna Rada of Ukraine on Grushevskogo St., 5, in particular, on the sidelines, there are no people's deputies, a small number of journalists, Verkhovna Rada staff and guards are left.

According to Gromadske TV, activists of the Right Sector brought tires, knocking on the door of the parliament building, breaking the glass on the doors.

Earlier, police said that the building of the Ukrainian parliament on Thursday evening, demanding the resignation of A. Avakov, is picketting about 1,5 thousand people. 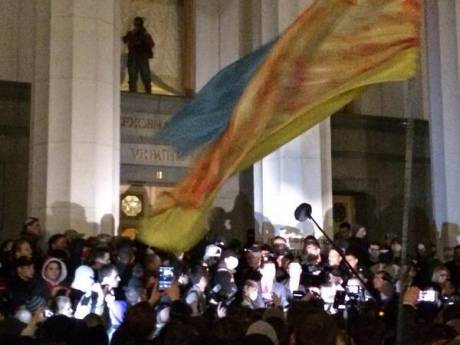 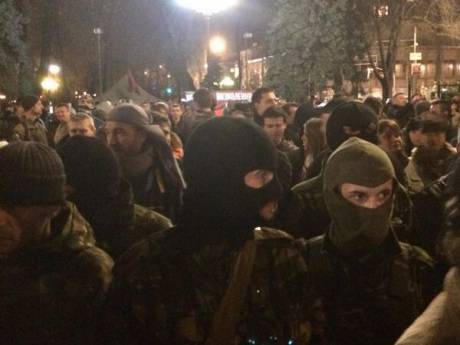 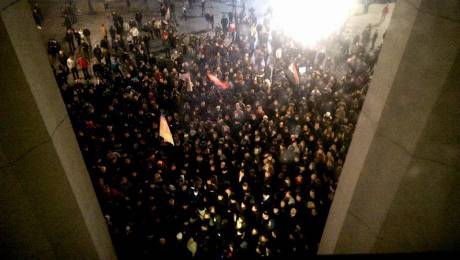 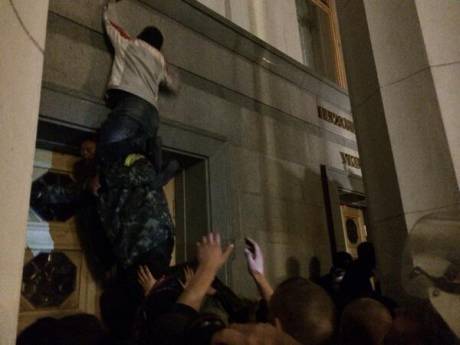 After it was decided to create a special commission that would investigate the situation with the death of Alexander Muzychko, activists of the Right Sector postponed the assault on the building of the Verkhovna Rada of Ukraine.

The fact that such a commission will be created, said the deputy of the Verkhovna Rada, Yuri Derevyanko. "Indeed, justice must be established [in the case of the death of Muzychko]. Tomorrow, to establish this, a temporary commission of inquiry will be created in parliament with the mandatory participation of representatives of the Right Sector," he told the gathering in front of the Ukrainian parliament.

In turn, after negotiations with people's deputies, a member of the political council of the Right Sector, Oleg Odnorozhenko, said: "Our demands, which we have set at the moment, are satisfied. Therefore, we are meeting near the Verkhovna Rada tomorrow and continue our control over the Verkhovna Rada." Another leader of the "Right Sector", Andrei Bondarenko, said that the rally near the parliament building, the main requirement of which is the resignation of Arsen Avakov, appointed by the Minister of Internal Affairs of Ukraine, will continue on Friday, March 28, in the morning, Interfax reports.
Ctrl Enter
Noticed oshЫbku Highlight text and press. Ctrl + Enter
We are
Reports from Strelkov Igor Ivanovich 29-30 July 2014 of the yearReports from Strelkov Igor Ivanovich 21-22 July 2014 of the year
Military Reviewin Yandex News
Military Reviewin Google News
110 comments
Ad