Yatsenyuk, after a backstage discussion with the “media community,” appointed Zurab Alasania the general director of the National Television and Radio Company. Instead of being beaten by Freedom, Panteleimonov, who was forced to sign a letter of resignation. Kharkiv media worker with an impressive balding appearance is known to the wider “non-media community” as a curator and one of the founders of “Gromadsky tv”. Not to the widest community - as a countryman of Arsen Avakov, a millionaire, a universal omnivorous businessman, a local media magnate and the current head of the Ministry of Internal Affairs.

All five years of the Avakovsk governorship in Kharkov, Alasania zealously worked as the director of the Kharkov regional state TRK. In his then-interviews, Avakov spoke warmly about Zurab and admitted that he had been pleased to initiate his appointment. They say that those wonderful years were the personal flourishing of Avakov himself. In 2008, Focus scrupulously rummaged in its pockets, having counted $ 385 million. To the dashing blue and white 2011, its capital decreased immediately by $ 100 million, and by 2013 - almost by 200. But let's leave Avakov with his millions. Moreover, in Ukraine, pocket millions are new to come.

There is no doubt that with the appointment of Alasania to the post, his pilot brainchild, the pseudo-public channel Gromadske, which will rightfully and finally move to the main national frequency, awaits flourishing. Perhaps the Gromadsky journalists will be removed in the spring from their uncomfortable perches and will move into the pencil rooms that have not yet cooled down. What can all-Ukrainian public television be like? The last months of fake ones showed News, a hysterical flood and a shameful information bank, which often carried journalists into a tailspin. Competitions of ambitious offtopic in a small live broadcast - a children's game compared to the capabilities of the national broadcast. A Western Ukrainian girl with boilerplate complexes and a cold pronon will now be even more confident in asking pointless questions to Khodorkovsky and accusing him of snobbery of the “big brother”. The tongue-tied anti-genetic and anti-intelligent Andrushko will begin to wind up seconds of budget time - puffing from powerlessness, like a donut lover - on a stationary bike. All of Ukraine will see Skrypin's “fakis” and his lifelong displeased face in the dark Skype window. And in the future, when the Public begins to feed heartily on taxes, the citizens of the South-East will receive more than one figurative “fak” for their money: “provocateurs”, “separatists”, “puppets”, “titles” have firmly entered the vocabulary of patriotic media . They do not give up habits.

And for so. Lobbyists, in a strange way, it turned out so much that he owed nothing to anyone.

How would pathos avoid, and yet say what I really think. Country need. And I can give it to her like this. This is all sorry. "I have no other motive for you."

So modestly and unpretentiously Alasania explained his appointment to the numerous congratulators and suckers. The words are not the husband, but the general "boy" of NTU. The very position of the director general of a television and radio company with budget financing of several million dollars does not imply freedom and independence. This is still a "gift." And Zurab, the former director of the “governor’s” channel, is aware of this. The "Evening Kharkov" website still contains an "anonymous" letter from Alasania’s former colleagues on the Objective media group, of which he was a co-founder.

In the 2006 year, after a change of ownership, the company had matured by all-Ukrainian standards, but an ugly scandal with massive layoffs and an ultimatum to Alasania’s supporters: the new owner should not interfere in editorial policy, “not that ...”.

As a result, some people quit. The rest in an open letter asked why the director of the Kharkiv TV and Radio Company Zurab Alasania, who was concerned about freedom of speech, “I started the working day by receiving instructions at the planning meeting in the governor’s office”; why and for what kind of security “Alasania requested and took substantial sums of money for his projects from various major Kharkov businessmen, including those representing (and in some cases heading) regional organizations of various parties (which is no secret for anyone in Kharkov)” (source: http://vecherniy.kharkov.ua/news/3946). And so on. In short, the standard insidious letter haters, envious and traitors of media values.

Whether the general director of the National TV and Radio Company will start his working day at Tymoshenko’s, and Yatsenyuk and Turchinov finish their work, the question is almost rhetorical. Especially on the eve of the most prestigious and dirty presidential election television campaign, the beginning of which Savik Shuster noted without a twinge of journalistic conscience with a recent broadcast.

Petro Poroshenko joined the presidential race with a good low start. The chocolate billionaire barin who swore a blood oath that he built Grushevsky again and restored Dynamo, brazenly wrote down the next promises in his election campaign. The head of the KSCA, Vladimir Bondarenko, boasted that the deputies-businessmen Poroshenko and Zhevago would partly fork out to restore the former appearance of the Kiev center. To celebrate, Ukrainian sociologists avidly prophesied Poroshenko’s victory, which by all honest opinion polls "...convincingly leads the presidential rating, twice ahead of Klitschko and Tymoshenko. ” According to the SOTSIS Center for Social and Marketing Research, the Kiev International Institute of Sociology, the Rating Sociological Group, and the Razumkov Center, Poroshenko will put as much 24,9-36,2% for Poroshenko. For Klitschko - 8,9-12,9%, for Yulia - 8,2-12,0%. Tigipko sociologists give 7,3-10,0%. Odious Dobkin brilliantly beats Yushchenko’s “ceiling” - 4,2-5,3%. "Komunyaka on Gilyaka" Simonenko, macho fork Lyakko and brave, but no one needed Colonel Gritsenko clash for 3%. Yagrosh and Yarosh generally “graze the back”.

And although the Crimea does not appear in the results, in the opinion poll Ukrainians demonstrate unprecedented unity and readiness to vote - 84%. Is believed? Not really. None of these hypothetical candidates personifies the entire “cathedral”. Each first - causes not only distrust, but also frank contempt. And every second - deserved a tick on the laws of wartime - not in the election list.

Meanwhile, the Ukrainian authorities continue to hypocritically gratify the beauty and pride of Ukraine - the military. The Verkhovna Rada plans to give the military the right to privatize housing in hostels. Finally, he found himself and the mega-supernova commander-in-chief, Turchinov, in the military theme. He ordered to dig anti-tank ditches on the border with the Russian Federation. Regional deputy Alexander Ponomarev noticed that farmers would suffer from this idea and called Turchinov's moats a “monument of stupidity”. But Turchinov went further and proposed to the Parliament a draft “On approving the decision of the President of Ukraine on admitting units of the armed forces of other states to the territory of Ukraine in 2014 for participation in multinational exercises”. To play air and infantry "hto not jumping, that moskal" Turchinov invites Poles, Americans, Romanians.

And the United States is finally demonstrating the promised sanctions against the oligarchs. Just the opposite. American lawyers of the most famous Ukrainian-Donetsk monopolist of vital resources, the oligarch with the surname “Ah” without trial, have run over Internet providers with the requirement to remove links to critical Oh-publications about white and fluffy Ah. Written ultimatums were received by the provider of the Espresso.TV channel (for reprinting the article from LB.ua) and the publication “haqqin.az”, whose article was published by Kyiv Post, Daily Mail, Le Figaro, Newsweek Polska. They also had to delete the article, allegedly at the request of lawyers.

“The haqqin.az editors received a letter from representatives of the richest person in Ukraine. Lawyers of the Ukrainian oligarch demanded to remove from the haqqin.az database the previously published my analytical article “Putin's Ambitions or where will Russia arrange a“ new Crimea ”?” - The author of the deleted article Hasanov is outraged.

According to the lawyers of Ah-ah, the articles slander his crystal Eh-reputation and associate him with Uh-criminality, in which he has never stepped foot. Therefore, publications should be immediately removed, to prevent this from happening in the future and not to hinder honest Ukrainian oligarchs from cleaning feathers in front of the European public. 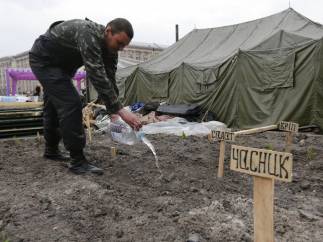 By the way, about vital resources. The Director of the Department of Economic Planning and Financial Settlements of Naftogaz Ukrainy NJSC Yuriy Kolbushin officially confirmed the tragic news. Starting May 1, gas tariffs for households will rise “so far by 50%,” and for heat and communal enterprises, from 1 July to 40%.

This information and animal intuition suggested to the population that it is time to look for alternative ways of survival. The Crimea is switching to local gas of Chornomornaftogaz, nationalized the other day, with prices remaining in force up to March 17, 2014. Maydanovtsy in anticipation of hunger and looming desperate alcoholism spud Maidan. Dropped off a snack: radish, onion, parsley. They promise to discharge from the village laying hens. And build a pigsty - not as the personification of the heritage of the Ukrainian revolution, but as a haven for two true pigs. It remains to bring manure - and Ukraine can be congratulated with complete self-sufficiency.

However, hardly new metropolitan farmers will be left alone. Extra eggs in Maidan chickens will be expropriated by the national bureau of anti-corruption investigations. Today, the law on its creation was registered in parliament - a small gift to the most ardent revolutionary supporters.

Ctrl Enter
Noticed oshЫbku Highlight text and press. Ctrl + Enter
We are
British media are unhappy with the appearance of Russian women soldiersHow can Russia survive and win in the 21st century?
Military Reviewin Yandex News
Military Reviewin Google News
70 comments
Information
Dear reader, to leave comments on the publication, you must sign in.