Where is the comma: "To award the president can not be ignored," or Notes "padded", "putinoida" and "hurray-patriot"

March 24 2014
290
If yesterday there were a considerable number of individuals in our country who claimed that the presence of an external enemy from Russia was utter fool, the tales of “putinoids”, “vatnikov”, “tails” and “hooray-patriots”, today the overwhelming majority of Russians (judging and According to polls of sociological services, and even ordinary conversations with completely different people and social position and political views, they are well aware that the presence of opponents of Russia, the forces holding back our country is an objective reality. It turns out that the overwhelming majority of Russian citizens have suddenly become “putinoids”, “hurray-patriots” and “quilted jackets”? Well, if precisely such definitions warm up his soul to someone, then for God's sake ... What child would not be amused, as they say ...


The enemy of my enemy is my friend. By definition.

And this is one of the objective reasons that the popularity of the Russian president and the level of trust in him in Russia in recent weeks has become one of the highest in all history finding Vladimir Putin at the helm of the state. Perhaps the last time such a level of support to the president was expressed by citizens during the first steps of his first term, when, in fact, the decisive actions of the head of state allowed to preserve the territorial integrity of the country against the backdrop of the worst military and political crisis in the North Caucasus.

You can trust the statistical monitoring agencies, you can not believe them, but the fact remains that the support of the decisions of the Russian president in connection with certain events is great and simply cannot remain unnoticed. VTsIOM gives the presidential rating in 75,7%, other agencies - no less than 73%. If we take into account that in the presidential election of 2012, Vladimir Putin won the 63,60% of votes, it turns out that today those who voted for other candidates two years ago are ready to support the presidential election. 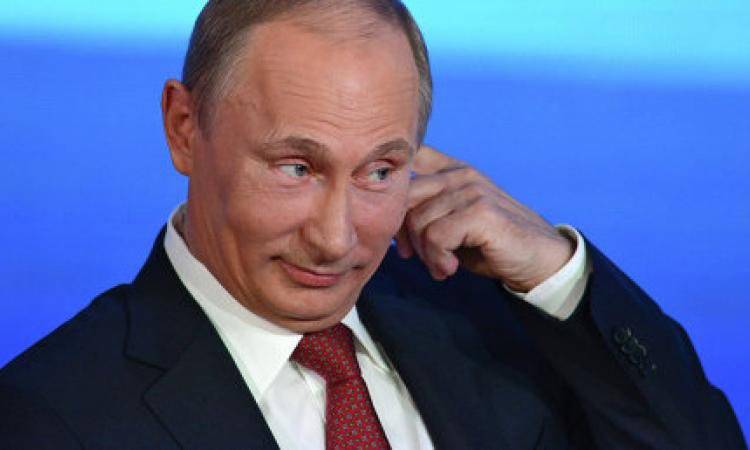 There are quite objective reasons for this. Putin, with all his pros and cons, with all his charisma and at the same time rather sluggish policy in terms of fighting corruption within the country, with foreign policy dignity and simultaneous questionable selection of government officials and his entourage in the administration, makes it clear that he is not perfect But with all this imperfection, he is ready to do everything to protect the geopolitical interests of the country, to consolidate Russian citizens, to make citizens aware of their primary role in the development of the state.

Surprisingly, apparently without realizing it, the West adds substantial political points to Vladimir Putin. If some time ago, under the guise of "reboots", the United States tried to hypnotize the Russians with its loyalty and taking into account our interests, respect for the sovereignty of Russia and its political choice, then today this mask is dropped. Under the guise of Russia, she saw the habitual “partner” figure skewed from the negative, which demonstrates the true attitude of the “partners” both to Russian strategic interests and to each of the Russian citizens individually. If the interests of Russian social groups contradict the interests of the West that has fallen into unipolar pseudo-euphoria, then such social groups are immediately declared outcasts, and their ladies and gentlemen are ideologically (and often financially) sent to their informational “lynching”. And it is here that the following terms appear on the air, causing nothing more than a condescending smile: “annexation”, “occupation”, “at gunpoint”, “putinoids”, “imperial ambitions”. And it becomes clear that to argue with such ladies and gentlemen, even if operating with the tenets of international law and the interests of the Russian (in the broadest sense of the word) people, simply come to nothing. Nothing, because these people understand everything perfectly well, but only hyperliberal, “correctly” sharpened by the Western media and political non-profit organizations in the style of USAID, MHG, etc., the essence has already become numb, the language is turned only to pronounce the prepared words . And if the essence is numb, then you will not even have to break your knee - with time they will be immobilized by themselves, with their own hands, in a fenced little world - a branch of unipolar hysteria.

So, the popularity of Vladimir Putin of February-March sample 2014 of the year is very high. The Russians simply could not fail to appreciate the dignity with which the president held a brilliant foreign policy party on the global chessboard. After this party, when the West received something extremely resembling a child’s mate, it turned out that a) Russia grew its ancestral territories, b) Russia showed the whole world not only “soft power”, as defined by President Putin, but also quite “tough” - forgive me for such a comparison - an erect force ... c) Russia declared publicly both about the existence of the Russian world and its fundamental interests, rallying society like never before for all the last, at least two and a half decades, d) has grown to unprecedented for all the last years of heights the level of patriotism and the level of citizens' involvement in epochal changes.

Perhaps, for the first time in recent times, numerous notes began to appear in Russian social networks and the media that it would be even humanly improper to skip the fact that a real, genuine patriotism was reviving in the country, and not pay tribute to the president. All sorts of people, from housewives to businessmen, from lyricists to physicists, began to speak out about the fact that Vladimir Putin for his work on consolidating the Russian world could well have become an award-winning. Moreover, these proposals are far from PR moves related to variations on the theme “Sveta iz Ivanovo” or “Weavers require a third term”. The proposals traced the genuine desire of the Russians to thank the president for giving the opportunity to feel themselves Russians - part of the big Russian world, whose interests now no one of the "well-wishers" will fail to neglect.

The Western and Russian hyperliberal press reacted with lightning speed to these appeals, as it was supposed to, frightening their readers with the "Putin personality cult." The reaction, as they say, is expected ... Well, God be with her ...
Does Vladimir Putin need a reward? And is there anything reprehensible in such sentences? Well, usually the accusations of awards, which are not initiated by narrow groups of adepts of praising, but by thousands of completely different representatives of the people, are reflected only by those who, for the development of the country and for raising their own level of patriotic culture, do not hit the finger. That is why the significance of such an award is hard to overestimate.

What kind of reward are we talking about? About the medal, about the order, about the bronze lifetime bust, about the award, about the title? .. Yes, it is not at all necessarily about that. Medals with orders and titles are, of course, great, but perhaps they are not always the attributes of civilian recognition of merit of a politician to a country. After all, we have enough and enough politicians who are awarded the highest orders, and some of them have prizes - peace, for example; but does this somehow increase their status in the eyes of ordinary citizens, does this, as they say, by default, respect the people? .. Another thing is when a person just comes to the store at the call of his heart, buys a Russian tricolor and proudly puts it on his shoulders, watching the salute volleys on the day of the great reunion. Another thing is when an ordinary citizen, a strong Russian peasant (as they say, far from sentimentalism) watches the joy of his compatriots in Crimea and Sevastopol with eyes full of happiness. Another thing - when the national anthem really goosebumps. Another thing is when the president’s speech is perceived in the same breath, and you don’t just believe this speech, but you also want to watch it again and again.

This is the reward that the overwhelming majority of Russians assigned to the president. Ratings can grow and rush down, the steps of a politician can be verified and reckless, but today this does not cancel the president’s merit before the Fatherland - real merit; merit, which allowed us to feel one people, worthy not only to have, but also to defend their own point of view.

75% "putinoidov" and "hurray-patriots", as we are called "banderlog" ... - great work, Vladimir Vladimirovich! No kidding: keep it up! A reward worthy of all the pendants with foreign prizes combined!

And therefore I will allow myself to expropriate a quote from the song of the unexpectedly designated “friend of Russia” Andrei Makarevich, who supported the Ukrainian “revolution” (after all, if a person supports all kinds of anti-constitutional coups, then he should be implicitly ready for revolutionary withdrawals from himself) ...

In general, comrade (and I was not mistaken with the appeal) president:

PS A terrible military secret for “banderlogov”: an article together with the author “paid for from the Kremlin”. In addition, the work, of course, was carried out “at the barrel of an automaton” ...

Ctrl Enter
Noticed oshЫbku Highlight text and press. Ctrl + Enter
We are
Results of the week. “So according to a dozen of you, citizens. For a dozen per capita "And again about footcloths: the new minister is against
Military Reviewin Yandex News
Military Reviewin Google News
290 comments
Information
Dear reader, to leave comments on the publication, you must sign in.