Statement of the Presidium of the Lugansk Regional Council 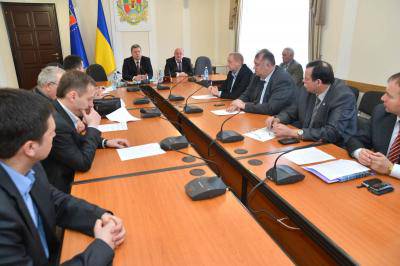 Today is exactly a month since the day the agreement was signed between the President of Ukraine and the opposition on resolving the political crisis. What does the country have now?


Ukraine lost the Crimea and the “zdobula” power, which very quickly disappointed even those who put it over themselves. Pogroms, violence, looting by the Maidan strike forces, either uncontrollable or covered by representatives of this new government, have become commonplace. The country is slipping into a systemic crisis, and its leaders are busy eliminating politically disagreeable and direct persecution of dissidents. The complete mismatch of public administration offers a bleak alternative to turning Ukraine into either a police state, or into a mandated territory (into a territory completely controlled from the outside).

Within a month, the Verkhovna Rada did not adopt a single law, which at least in an insignificant volume expanded the rights and freedoms of citizens, reformed the power system, changed the fundamentals of economic and business development, and created the prerequisites for a real fight against corruption.

The chaotic impulses of people who have received control over the country are not only surprising, but also causing outrage to a growing number of citizens. They make you think about who actually controls the state today and makes decisions: “centurions of self-defense”, Maidan councils, those whom they appointed to public officials, or some third parties whose role Ukrainian citizens can only speculate about?

Otherwise, how to explain that in the evening the Secretary of the National Security and Defense Council announces that he withdraws from the CIS, or immediately introduces a visa regime with the Russian Federation, and in the morning the Prime Minister suggests that you think carefully before taking such a step? A step that automatically deprives the residents of the border regions of the opportunity to communicate with their relatives and forces the citizens of Ukraine who work in the neighboring country to return and increase the number of the unemployed in their homeland or become political refugees. The step combining economic sabotage with political restriction of the rights and freedoms of residents of the south-east.

How to explain the fact that the law of force becomes the main form of law? Participation in the "revolution" suddenly became an indulgence for those who break the law. And being a member of Freedom that turned out to be in the imperious team allowed its activists to believe that they will decide who will work where and how much. The video about how the group of “Svobodovtsy” headed by people's deputies Igor Miroshnichenko, Andrei Ilyenko and Bogdan Benyuk forced the head of NTU Alexander Panteleimonov to write a letter of dismissal with force and threats, how these fans of Bandera and Shukhevych imagine freedom of speech .

The authorities in Kiev, despite the hardest economic situation, create the National Guard and at the expense of taxpayers employ armed groups, and in the meantime they spread to the regions, engaging in extortion and robbery, “spin” business, appointments and dismissals to the positions of everyone they consider necessary. And everything happens under cover or with the direct participation of ultranationalist leaders with mandates of people's deputies.

It would seem that the Crimea should have sobered those who did their best to split the country. Unfortunately not. While some high-ranking politicians began to appeal to residents of the southeast with promises and appeals to preserve the integrity of the country, an official of the Ministry of Foreign Affairs calls Ukrainian citizens of Russian nationality a “diaspora” who has no rights here, and not Naturally, outraged residents of the south-east of Ukraine. Where is the limit of hypocrisy and cynicism?

Outraged by the fact that the most important, life-determining political decision on association between Ukraine and the EU was taken almost behind the scenes - signed today in Brussels without prior extensive discussion. At the same time, the population of the country has no idea about the consequences of this step, which can be very, very serious. It’s no accident that experts say that the “political association” effectively deprives Ukraine of a part of its sovereignty.

We appeal to the residents of Lugansk region

It is necessary to recognize: the Maidan created the prerequisites for understanding that rights and freedoms are only worth something when they are not received as charitable assistance, but won. We must uphold the interests of the region, by all means strive for truly democratic changes, not to imitate them.

We appeal to all political forces, public organizations, communities.

It is necessary to create public councils, people's assemblies and other organizational forms of democracy by people everywhere, to develop proposals and demands, forming a consistent program of action.

The Lugansk Regional Council, as the legal body of representative power, is ready to work together with all the constructive forces that are striving for democratic reforms in the country.

Do not violate the rights of citizens to protect their interests and peaceful protests, stop any attempts to prosecute activists for political reasons, no matter who orders to do so. Your goal is to promote the rule of law, and not to “clean up” those who disagree.

We are compelled to state that there are more and more reasons to remind you of this. In the office of the head of the Ministry of Internal Affairs of Ukraine in the Luhansk region, Arsen Klinchaev, a deputy of the Lugansk regional council, was subjected to harassment by the people's deputy Oleg Lyashko and a group of people. The other day, with the support of special units, an attempt was made to seize equipment from the Luhansk-based Randar company, whose head is an active participant in protest actions.

We demand an objective investigation of the armed provocation perpetrated by representatives of the Luhansk branch of the Udar party 22 in February 2014 of the year near the building of the regional state administration and the regional council, as a result of which people suffered.

Law enforcement agencies must do everything possible so that they are not turned into an instrument of political reprisals and the creation of a police state.

We appeal to the Verkhovna Rada of Ukraine

We demand in the shortest possible time to initiate legislative consolidation of the status of the Russian language as the second state language, and also to create a legal field for the implementation of the decentralization of power, the expansion of regional powers.

We are compelled to state that until now our appeals and demands, which are the expression of the will of the inhabitants of the entire region, have remained without attention and proper response.

And therefore we declare: in case the opinion of the residents of the Luhansk region is ignored this time, the entire responsibility for the further aggravation of the socio-political situation in Ukraine will fall precisely and only on the central government.