Carte blanche. Arctic can be Russian-Chinese 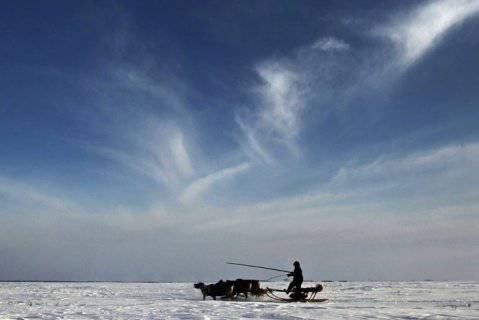 In the Arctic region, Russia has legitimate and reasonable economic and geopolitical interests. But competition for sources of raw materials among traditional Arctic countries is becoming tougher, and the eighth session of the Arctic Council (CA) in Kiruna in May 2013 showed that claims to the Arctic are growing among new players, such as China, India, and Japan. That is why Russia needs to develop a strategy to protect its national interests in the region, and it is possible to involve in cooperation a long-time partner - the PRC.

However, why China can become a partner of the Russian Federation in the Arctic? First, Russia intends to develop its military presence in the region at the expense of sea, air, missile forces and means for deterring foreign military presence (especially Western countries) and protecting the most important infrastructure facilities. In this regard, it needs investments and technologies that can be obtained in the framework of the Arctic partnership with China.

Secondly, as one of the Arctic countries and the largest power and mineral resource reserves in Russia, Russia has a unique opportunity to fully utilize these reserves to use China’s financial, labor and technological resources, which have advanced technologies for resource extraction and are looking for partners for their development. .

Thirdly, the priority for the Russian Federation is the development of the Northern Sea Route, which could potentially be an alternative way for China to export its goods. During the passage of it, Russia will be able to receive regular financial income.

Fourth, China, as a permanent observer in the AU, officially confirmed its readiness to follow the principles of respect for the sovereignty and sovereign rights of the Arctic states. At the same time, as a major power, China wishes to contribute to strengthening peace and security in the region, which indirectly indicates a low level of its political ambitions and at the same time a desire to promote the development of the region. That is, China has no geopolitical claims to the Arctic.

Fifth, Beijing will not be able to use the new status in the AU as a lever for the implementation of economic plans within the framework of a regional strategy, since the AU is a forum that brings together all interested players in the Arctic space. The unanimity of all members of the AU is limited to the environmental sphere, since interests in other areas are often diametrically opposed. Outside the jurisdiction of the NPP are the issues of natural resource extraction, as well as the construction of infrastructure.

Sixth, the presence in the AU has only symbolic significance for China. He expects that he will be able to take part in shaping and implementing the regional agenda. At the same time, China’s involvement in projects will depend on building bilateral partnerships with each circumpolar country separately. Russia and China can use the AU as an additional platform for exchanging views on regional development issues.

However, one must take into account the arguments of opponents of cooperation between the Russian Federation and China in this region. First, according to some estimates, by the 2020 – 2040 years in the summer, the Arctic will be navigable. New trade routes can pass through the region. Such prospects cannot but interest China as the world leader in export volumes. Consequently, he will be interested in establishing his strategic control over this transport artery, possibly using military levers for this, which is disadvantageous for Russia.

Thirdly, China made significant efforts to become a member of the AU. Despite restrained statements, China in practice has noticeably intensified its diplomatic efforts in the Arctic direction, engaging in particular in the search for partner countries for the development of the region. This indicates that the PRC, playing on the contradictions of the Arctic countries, builds its own policy aimed at consolidating itself in the region.

Fourthly, the Arctic historically under the control of Russia, the USA and Canada is becoming a new playground for China. Melting ice opens up commercial and strategic opportunities for China. If in the future China manages to deploy a nuclear submarine in the Arctic, it will create the conditions for strategic deterrence of Russia, Europe and the United States. Taking into account the individual statements of Chinese military specialists and representatives of the generals, it is impossible not to admit that China will defend its military interests in the Arctic, creating a group of surface and submarine forces there.

Based on the pros and cons, it can be said that the most pragmatic approach for Russia is building strategic cooperation with China, aimed at developing the Arctic direction in foreign policy. With no valid claims for exploration and production in the Arctic, as well as its geopolitical consolidation in the region, China can gain access to resource extraction and the Northern Sea Route in exchange for investment and technology. Favorable joint mining contracts, guarantees of the most favorable conditions when using the Northern Sea Route will help Russia to gain substantial support from the PRC in defending its position on expanding the limits of the continental shelf at the UN Commission. In the case of Russia’s delay, China as an alternative will go towards rapprochement with other Arctic countries, including the United States and Canada, which will negatively affect Russia's position and influence in the Arctic as a whole.

Ctrl Enter
Noticed oshЫbku Highlight text and press. Ctrl + Enter
We are
Hybrid threats have arisen in the ArcticNew plants and workshops in Russia in 2014 year
Military Reviewin Yandex News
Military Reviewin Google News
73 comments
Information
Dear reader, to leave comments on the publication, you must sign in.