Finland: part of Russia or a member of NATO? 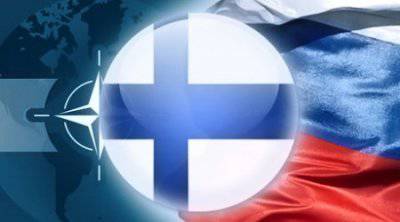 Last year, the Finnish public talked about the fact that it would be nice for Finland to join the Russian Federation with rights similar to those of Hong Kong in China. Entry would be beneficial because the north-western region of Russia is an established market for Finns. And in some places in Finland they began to accept rubles. Also, the Finns decided to learn Russian in large numbers - starting right from the schools. However, now, after the “Crimean crisis”, the attitude towards Russia has changed. Already in Helsinki, the voice of a brisk public figure and lawyer Hanna Krogerus, who hatched ideas about uniting the two countries, is not heard. There are completely different voices - from the government. In Helsinki, once again thinking about joining NATO. Finnish Prime Minister Jyrki Katainen said in an interview with the German newspaper Der Tagesspiegel that his country does not take a neutral position in the Russian-Ukrainian conflict. This is how politics can stick a stick in the wheel of the economy.


Finnish schools are intensively studying Swedish. However, in January 2013, residents of Eastern Finland Province decided that the time had come to learn Russian. Finns briskly trade with Russians, sometimes they drink Russian vodka, speak with Russian tourists, and they themselves go on tours. Does St. Petersburg speak Swedish? In addition, the Swedish will soon become obsolete: by the 2021, the “Swedes” and “Norwegians” will speak Arabic. So think analysts.

However, President Sauli Niinistö last year explained that “you shouldn’t oppose Swedish and Russian. It is in our interests to offer young people maximum opportunities for success. ”

And yet, as пишет The Finnish edition of Iltalehti, according to the survey, about 90% of the population in Eastern Finland speaks in favor of replacing Swedish school lessons with Russian language lessons.

In March of the same 2013, as reported Information portal of the Russian community of Latvia With reference to the press service of Johan Beckman, Hanna Krogerus, an influential Finnish public figure, lawyer, and lawyer, said that he wanted to see his homeland as part of Russia.

In the influential Finnish magazine Suomen Kuvalehti, Comrade Krogerus wrote down his economic and political idea in detail: “Of course, Finland must be Hong Kong within Russia. It is the international economic community from Asia to America that demands this. Finland still has a chance to occupy the same position in Russia as Hong Kong occupies in China. ” He cited the following argument: "For us, the entire north-western region of Russia is already a home market." The only problem is young politicians-russophobes. They want to isolate Finland from Russia, the lawyer believes.

In this opinion about the fate of the motherland, Hanna Krogerus is not alone. Earlier, Juho Eerola, a member of the Finnish parliament from the True Finns party, proposed the creation of a strategic military alliance between Finland and Russia. According to Comrade Aerola, this is the only way to guarantee the safety and well-being of Finland. And his fellow party member Hemmo Koskiniemi went further: he demanded to include Finland back into Russia.

According to the friendly opinion of True Finns, an autonomous Finland within the “Russian empire” is the only way to fight against the EU, NATO, as well as aggressive Swedes.

And here is another Finnish fact in favor of Russia, also from 2013 of the year.

According to recent opinion polls, the majority of Finns oppose the country's entry into NATO. According to the research center “Taloustutkimus”, which polled the population last summer, only 29% percent support the country's entry into the alliance. He writes about it RBC. Opponents of Finland’s entry into NATO are already 52%. As noted by the head of research at Taloustutkimus, Juho Rahkonen, the majority of Finns believe that Finland should make decisions on its own, regardless of what the neighboring countries are doing.

Finnish Prime Minister Jyrki Katainen сказал in an interview with the Berlin newspaper Der Tagesspiegel, that the country is not a neutral party to the Russian-Ukrainian conflict. This statement was a kind of "third party" response to the proposal of the former US Secretary of State G. Kissinger, addressed to Ukraine.

Mr. Kissinger suggested that Kiev adhere to the “Finlandization” policy, i.e., maintain neutrality. The Finnish Prime Minister noted that he deeply respects Kissinger, but does not agree with all his provisions. I do not agree because the former US Secretary of State sees Finland as a country during the Cold War. Jyrki Katainen reminded GK that Finland has been a member of the EU for almost two decades. He added: "We no longer take a neutral position, although we do not join any military alliance." And then Mr. Katainen told the German newspaper that Finland is constantly considering the possibility of joining NATO. The decision to join the alliance does not depend on the country's desire to maintain good relations with Russia.

Such a harsh and unpleasant statement for Moscow. Whether it was a response to Kissinger’s unambiguous statement, partly resembling good advice to a “non-independent” player in the political arena, or the whole West represented by Barack Obama gave Helsinki’s valuable instructions — that is, made some offers that could not be refused. All this is covered by the darkness of political secrets.

As for Kissinger’s statement, it’s not lonely either.

Jack Matlock Jr., who worked as the US ambassador to the USSR in 1987-1991 (that is, to reorganization), recently published a plan of necessary Western actions in Ukraine in Time magazine. Excerpts from this plan leads St. Petersburg portal online812.ru.

First, Western states should abandon harsh criticism and concentrate on stabilizing the situation in Ukraine. Secondly, Ukraine itself does not need to mourn the loss of the Crimea, on the contrary, we should be glad about the future fortification: “Nothing makes a nation weaker than the territory whose residents want to become citizens of another country.” Thirdly, Matlock advises Ukraine to give Russian the same status as Ukrainian. Fourth, the former ambassador invites Ukraine to declare that the country will not join NATO or another military alliance, which does not include the Russian Federation. Fifth, the ex-ambassador cited the example of Finland, resigned to the territorial losses 1939 year. The former diplomat described the behavior of this country in the political arena by the Russian saying “Hush the waters below the grass”. As for the USA, they are advised by Matlock “to try not to play an active role, but to facilitate negotiations and bring the parties closer together.”

However, it is obvious that the West does not heed sensible advice. How is that - Washington will play the role of some kind of second or even third plan? Well, in extras? .. The White House got used to the main roles!

As for the “cold war” mentioned above, whatever the Finnish rulers say, it never ended. Political, they are also economic, conflicts in the world will never cease at all - to think otherwise means not to understand either the theory of evolution or the reasons for the existence of competition. Therefore, the statement of the Finnish Prime Minister is not at all a rejection of the rhetoric of the Cold War, but just its confirmation. And the objection to Kissinger looks like the most real "dependent" behavior of Finland - not to mention the fact that the statement of the Prime Minister contradicts the wishes of the Finnish people. Of course, this is another big question - will Finland join NATO, or not. But the fact that Katainen made a rejection of neutrality precisely after the Crimean referendum is very symptomatic ...

Observed and commented on Oleg Chuvakin
- especially for topwar.ru
Ctrl Enter
Noticed oshЫbku Highlight text and press. Ctrl + Enter
We are
Finland and Sweden: who will last more than a week against Russia?Finland: forward to the Russian bear?
Military Reviewin Yandex News
Military Reviewin Google News
88 comments
Information
Dear reader, to leave comments on the publication, you must sign in.