Russia with the Crimea. Rare neutrality of Israel

March 21 2014
139
One of those countries in the world that today refrain from sharp criticism of Russia over the fact of Russia's reunification with the Crimea and Sevastopol is Israel. At the same time, in a number of Western countries, the very restrained Israeli position is openly criticized: they say that this is official Jerusalem (or Tel Aviv), allows itself ?! “How can he not go in a united front against Russia after all that she“ created ”with the Crimea ...”


Indeed, all recently the state of Israel has strictly adhered to the policy that the United States of America tried to implement in the world. And today, the Israeli position, frankly, is far from what its Western "partners" are trying to demonstrate.

In one of the recent programs on Israeli television (9 channel) of programs, Israeli Foreign Minister Avigdor Lieberman (by the way, born in Chisinau), speaking to viewers, said:

For us, the correct conclusion - do not climb into this mess. Do not go where we are not asked. We have very good relations with the Russian side, with the Americans, and we also maintain contacts with the Ukrainian leadership.

After the Crimean referendum, the position of the Israeli Foreign Ministry has not changed. Even personal meetings of the head of the Israeli foreign affairs agency Lieberman with the head of American diplomacy (and the Americans are sure that they have diplomacy ...) John Kerry did not affect it. Avigdor Lieberman once again stated that Israel needs to take the most neutral position, quote: in such a sensitive issue as the independence of the Crimea and its accession to Russia.

What is the basis of such a restrained position of the Israeli Foreign Ministry, in relation to which the West (first of all, the United States naturally) had its own, let's say, hopes. There are several reasons for Israeli restraint (for now, restraint). And these reasons should be considered separately.

One of the reasons that no matter how the Ukrainian and Western media tried to hush up, is the problem of the growing threat of anti-Semitism in Ukraine. Israel, by definition, can not ignore such a problem. 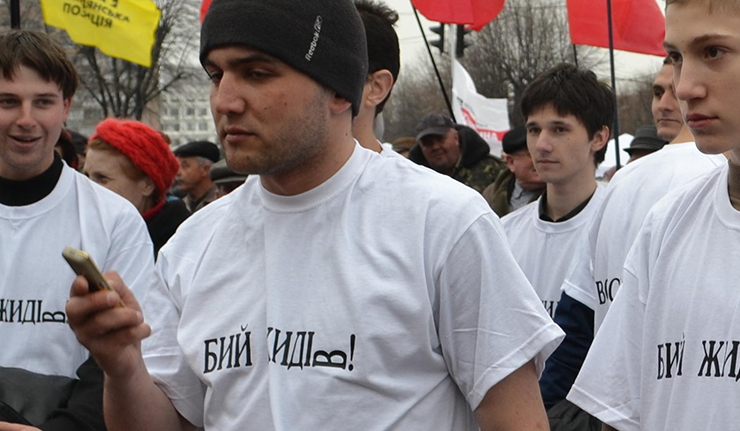 It should be noted that anti-Semitism in this case is only one of the constituent parts of a much larger scale negative process taking place on Ukrainian territory. This is anti-Semitism in combination with Russophobia and intolerance of all those who do not wish to accept the power of the Maidan in Ukraine. By and large, this is the real fascism, which manifests itself in a protruding form "thanks to" the connivance, and even outright complicity of the so-called new Ukrainian authorities.

Of course, the recognition or non-recognition of these authorities themselves by ordinary Ukrainian citizens to Israel, as they say, on the side. But not at all on the side information about the persecution of Jews, which almost every day comes from the "Square". Only in the last month (since the “victory” of the Maidan) several facts of desecration of synagogues were recorded in the Zaporizhzhya and Nikolaev regions.

In addition, a brutal attack was committed on the Kiev rabbi Hillel Cohen. The citizen of Israel, who came to Ukraine for educational activities, was attacked and beaten. There were attacks on parishioners of Jewish cultural centers, one of which was Dov Ber Glikman, who was visited in the Kiev hospital by the Chief Rabbi of Ukraine Moshe Asman. 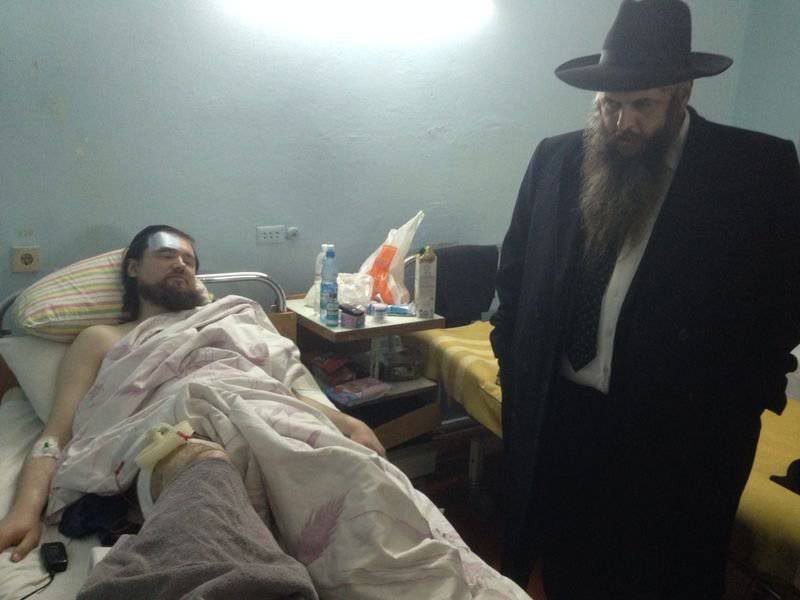 Asman attacks the Jews as follows:

The Jewish community of Podil is in a state close to panic. People are afraid to go out.

It is noteworthy that, despite the obvious facts of manifestations of anti-Semitism in different regions of Ukraine, in the last few days the rhetoric of the leaders of the Jewish organizations of Ukraine has unexpectedly changed. It changed to the completely opposite ... And it’s quite remarkable that among those Ukrainian Jews who today speak about the absence of antisemitic tricks in the country, that same main rabbi of Ukraine Asman. What an unexpected metamorphosis of the positions of a religious leader, however.

To understand the picture - the words of Mr. Asman, uttered by him exactly a month ago (February 21 2014 of the year), transmits information resource http://izrus.co.il/:

On the streets of Kiev, and other cities, a large number of aggressive-minded groups of young people armed with sticks, attempts at provocations are possible, so people are not recommended to leave their homes without special need. In such periods of anarchy, unfortunately, you need to be alert. Attempts at robbery are also possible, which is why I recommended that people temporarily remove children and women. But I repeat that after two attacks on Jews from the synagogue on Podol in January, such incidents did not recur.

A few days after Asman called for Jewish families to bring children out of Kiev and his words that “such incidents did not recur,” fascist signs began to appear on the houses of Jews and on the front doors of the synagogues ...

The same Asman 19 March 2014, together with the head of the All-Ukrainian Jewish Congress, Vladimir Rabinovich, declare that the dissemination of information about the growth of anti-Semitism in Ukraine is provocative.
And right there, Asman introduces an addition (quoted from http://joinfo.ua/):

Synagogues and Jewish cultural centers are now heavily guarded, but this is done rather to reassure the public, and not because of a real threat.

All these thinking throwings, all the contradictions of high-ranking representatives of the large Jewish community of Ukraine (and this community has at least 1,8 million people) can only say that people are simply afraid of reprisals from the new authorities. The whole world saw a Verkhovna Rada deputy from ultra-right Freedom beating the director of a national Ukrainian TV channel. For obvious reasons, the same Asman today is compelled to speak out in the spirit of the fact that they say there is no anti-Semitism, and that, they say, these are all the machinations of "external forces." Of course, of course ... intrigues ... 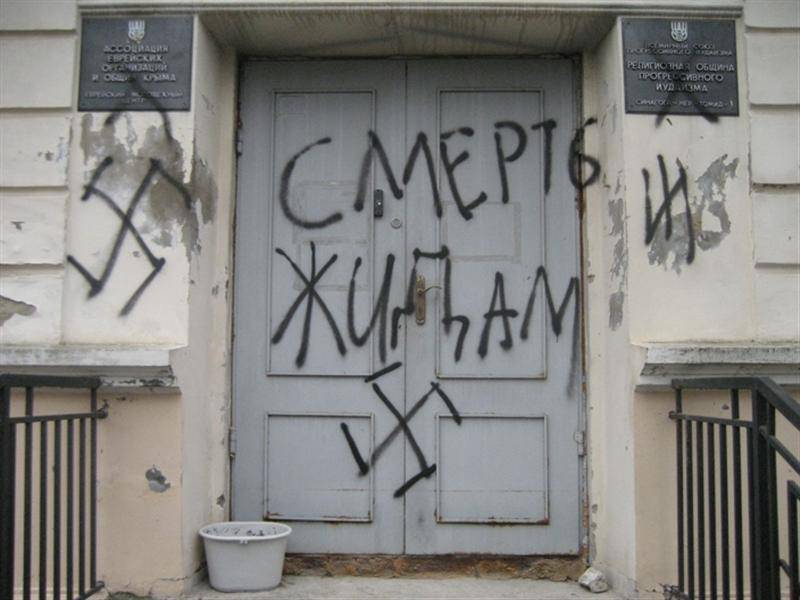 Obviously Israel, as they say, monitors the Ukrainian process. For the time being, the position of official Jerusalem is restrained (there are more of the Syrian issue occupied ...), but if the “Right Sector” and “Freedom” continue their ascent to the olympuses of the Ukrainian authorities, then Israel will, by definition, have to dot the i's position if it is a defender Jewish interests in different countries of the world.

Now for another reason that Israel does not criticize Russia for its decision related to the Crimea. The reason for this is that Israel has its own precedents for the annexation of territories, and also that Israel in general can become the first state in the world that can experience the “charm” of anti-Russian military and economic sanctions. The fact is that if the West turns off military cooperation “definitively” with Russia, then Russia will have no barriers for military cooperation, say, with Iran. The Russian authorities have repeatedly stated that if the West imposes sanctions, Russia will look for new partners.

Therefore, everything that Russia today cannot deliver to Iran under international agreements, tomorrow it is free to deliver there ... Attention is the question: who can feel the military gain of Iran in the region? Israel. At least, they think so in Israel itself. And this is directly stated by Amos Gilboa (a former high-ranking Israeli intelligence officer, whose opinion today in Israel is the authorities and the military are listening to). General Gilboa says that sanctions against Russia could redraw the entire Middle East and strike at Israel, which will provoke instability in other regions.

In general, Israel today is in a state of scratching his head in thought.

Ctrl Enter
Noticed oshЫbku Highlight text and press. Ctrl + Enter
We are
"Trouble" of the Promised Land. African immigration to IsraelSituational analysis of the death of the MH17 flight (Malaysian Boeing 777), made on the basis of engineering analysis from 15.08.2014
Military Reviewin Yandex News
Military Reviewin Google News
139 comments
Information
Dear reader, to leave comments on the publication, you must sign in.