Central Council of the Ukrainian Republic: how it was a hundred years ago and how it ended 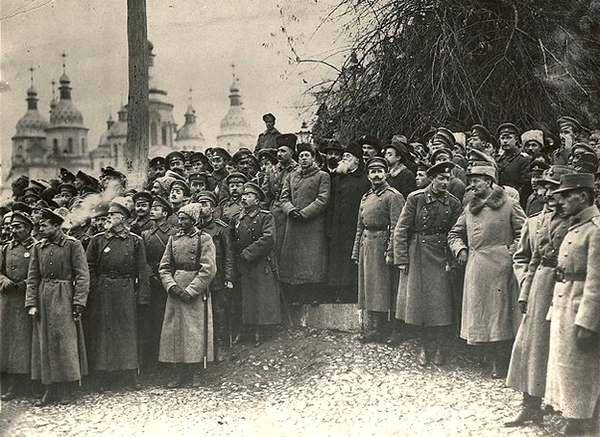 The February revolution of 2014 in Kiev involuntarily suggests comparisons with similar events of 1917. Since then, much has changed, and therefore any historical analogies can be considered random. The only thing in which we observe striking stability is the behavior of temporary workers who, unexpectedly for themselves, gained power.

February 1917, the Kiev authorities survived without major changes and shocks. Various institutions (provincial government, consistory, court, duma, school district, etc.) simply nominated the most liberal representatives from their ranks, who with a pertinent current moment began to loudly welcome the coup d'état. The government has also been replenished with people who today are called civil activists.

In turn, civil activists of the Ukrainian national movement created the Central Council. At first, it was perceived on a par with the Polish Executive Committee, the Council of United Jewish Organizations and other exotic things, demonstrating the cultural and national diversity of the Little Russian provinces. The Jews even requested permission from the authorities to share in two rooms with the Central Council in the Pedagogical Museum. However, soon the Central Council itself became power.

The Provisional Government continued the senseless slaughter for the interests of the Entente. Consequently, any force that openly advocates “for a world without annexations and indemnities,” automatically gained popularity. The Bolsheviks played on this, the Central Rada also rose on this.

Huge crowds of deserters began to create Ukrainian national units, hoping to stay in Kiev and not get back to the front. Their example was followed by active divisions of the South-Western Front. The Central Council unexpectedly became the owner of more than three hundred thousandth army. Military units willingly succumbed to formal Ukrainization regardless of their initial ethnic composition.

Only one case is known when soldiers and officers rejected the corresponding proposal - this is the self-dissolution of the guard of the cuirassier regiment, which stood near Kiev. But here it must be taken into account that heavy cavalry was considered a guard among the guards. The special selection of officers and privates, the military traditions of the regiment from the 1702 of the year - naturally, their demoralization affected them to the least extent. In addition, the cuirassiers had a very bad history of relations with Ukrainian national units. In the summer of 1917, the Kiev Military District used the guard as a detachment in order to drive two regiments of deserters back to the front. There were numerous casualties on both sides. That is, the military fraternity did not work out from the very beginning, and the cuirassiers reasonably suspected that they would not be welcomed in the Ukrainian army. Everyone else didn’t care if the war ended.

However, the Central Council was far from the problems of the army, as well as real life in general. Here is what was proclaimed in the Declaration of the General Secretariat (the then Ukrainian government) on the principles of its activities: “This is a completely new, modern, based on completely new foundations, rather than the old European and especially Russian pre-revolutionary government ... Its peculiarity lies in trust - pure, unmixed no coercion. "

All that the new modern power could do on pure trust was reduced to integrating into its membership the executive committee of the Kiev City Duma - the very liberal representatives of the old regime, who were relatively compatible with Ukrainian culture and public education figures. The fraternization of the “all-Russian” and “Ukrainian” authorities was sealed by joint steamer sailing along the Dnieper. Having a little debated on ethnography, the parties agreed on the division of seats in government bodies. The former Kiev authorities received a quota of 30%. Given that the Provisional Government cut off the Central Rada unexpectedly large territory in the 10 provinces (one of them, however, was still to be conquered by the Austrians), the all-Russian liberals of Kiev dislocation believed that they had settled well.

Time of hope and disappointment

As the Provisional Government weakened, the Central Council was affirmed in the thought that it would inevitably flourish a separate Ukraine on the ruins of Russia. The Kiev delegates with a light hand recommended Petrograd to transfer the all-Russian power into the hands of the congress of the soviets, that is, the Bolsheviks. The collapse of the country in this case seemed inevitable.

Finally, what the Central Council was glad to say in Kiev and Vladimir Ilyich Lenin in Switzerland happened. In October 1917, the Bolsheviks took power in Petrograd. The Central Council proclaimed the creation of the Ukrainian People’s Republic, and in Kiev the newspapers finally expressed everything they thought about the fallen Provisional Government. Those who had previously joined the Central Rada all-Russian liberals were shown the direction toward the station, but not on the Moscow train, as today, but on the Don. The future White Guards gathered there with forces.

The euphoria lasted just over a month. Everything changed when the Council of People's Commissars in Petrograd refused to recognize the secession of Ukraine and declared war to the Central Rada. Along the way, it turned out that the "Ukrainianized" army does not exist. Military units that sabotaged the dispatch to the front under the pretext of serving the national idea refused to die for the Central Rada. Instead of them, hurriedly armed Kiev students were sent to meet the revolutionary army. As is known, the sad finale of the events near Kruty is still inspired by Ukrainian nationalists.

Ukraine was very unlucky to meet the Soviet authorities in the face of its random companion - Mikhail Muravyov, commander of a group of troops in the Kiev direction and a dangerous maniac, soon shot by the KGB while trying to arrest. “The worst enemy couldn’t bring us as much harm as he did with his nightmarish reprisals, executions, giving the soldiers the right to plunder cities and villages. He did all this on behalf of our Soviet government, rebuilding the entire population against us, ”comrade Dzerzhinsky said, and Iron Felix knew exactly where the line between justified and senseless use of cruelty lay.

Therefore, the former enemies - the Germans and Austrians, whom the Central Rada called for help - were met without much hostility in 1918. Until the invaders began to do something for which they, in fact, appeared in Ukraine. With great energy and perseverance, the Germans began to knock out millions of pounds of bread from the Ukrainian provinces.

Politicians from the Central Council in this economic program turned out to be a useless ballast. They could work quietly further, since the undoubted talent of Mikhail Hrushevsky gave this gathering of random people a completely parliamentary appearance. However, the abduction of banker Abram the Good for the purpose of ransom, in which several members of the government were involved, including the Prime Minister, put an end to the history of the Central Council.

The Germans came to arrest the organizers of the crime directly to the session of parliament. Prime Minister Vsevolod Golubovich, feeling the clouds gathering over his head, two days before this fateful event from the tribune of the Central Council was glad to reassure his comrades: “Who is, properly speaking, Mr. Good? Maybe he is a subject of the German power? No, he is neither a matchmaker, nor a godfather, he is a complete stranger. ”

However, the military administration nevertheless stood up for “a completely stranger”, which provided the financial side of the foreign trade of occupied Ukraine with Germany and its allies. 28 April 1918, the Central Rada has ceased its purposeless existence. The occupants handed over power to the former general of the Russian imperial army, Pavel Skoropadsky, who took the hetman’s mace in his hands and bestowed a constitution on the Ukrainian state.

Attentive subjects of the newly-formed monarchy were surprised to find that the hetman's constitution repeats the “Code of Laws” of the Russian Empire 1906 of the year word for word. The era of experiments for some time over ...

Ctrl Enter
Noticed oshЫbku Highlight text and press. Ctrl + Enter
We are
Cossacks and the February RevolutionFrom the history of own names of aircraft of Russia, 1885-1917 years
Military Reviewin Yandex News
Military Reviewin Google News
5 comments
Information
Dear reader, to leave comments on the publication, you must sign in.