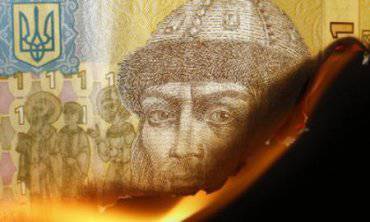 Kiev regime was in a difficult position. Last week, it finally became clear that Ukraine, in essence, did not have an army. If the local military elite could boast at least a Latin American look, then the linear units look frankly incapable and demonstrate an unwillingness to fight; pre-mobilization measures are clearly not shaky, nor roll; The defense industry, in front of which the army’s debts reached almost a billion hryvnia, refuses to repair equipment. Military assistance requested by Kiev from the United States, while reduced to the supply of dry rations.


The government hastily form a twenty-thousand National Guard, the backbone of which with almost 100% degree of probability will make the militants of "Freedom" and other relatively controlled nationalists; for this purpose it is planned to spend an additional 6,8 billion hryvnia (about $ 700 million) within three months.

Naturally, this creates an additional burden on the already meager budget, but the hyperactivity of the Yatsenyuk administration has quite a transparent subtext - the prospects for the Ukrainian economy look even worse than the most inveterate skeptics have assumed. So, the country is quite obviously on the verge of a gas war with Russia. By the beginning of the Crimean events, Ukraine’s gas debt had already reached $ 1,89 billion, and continued to grow. Even with a preferential price of $ 286 per 1000 cubic meters, gold reserves of Ukraine evaporated every month to $ 1,5 billion. However, since April the discount is no longer valid, and Gazprom moves to prepayments. Worse, the Crimean crisis creates a formal reason for revising the Kharkiv agreements, which provide Kiev with a roughly 100-dollar discount. Thus, theoretically, the price for Ukraine could be about $ 500. At the same time, at a price of $ 400 for 1000 cubic meters, the country's balance of payments deficit will increase by almost a third - to about $ 20 billion, far exceeding 10% of GDP, which in itself looks like a total disaster. The prospect that Kiev will not pay is clear enough.

In April-May, the deadlines for payment for the previously ordered nuclear fuel in Russia, which the Russian Federation in many respects simply fears to supply, expire.

At the same time, “energy” debts are only the top of the Ukrainian debt iceberg. Financially, private Ukrainian business looks even worse than the state - in recent years it has “developed” due to the collection of expensive and short-term debts. As a result, only in this financial year, "private traders" will have to pay $ 34,8 billion - an astronomical figure for the often unprofitable Ukrainian business. Meanwhile, the financial assets of the Ukrainian top are great only on the scale of Ukraine - for example, Brzezinski’s “brilliant” idea, who suggested collecting a billion from the oligarchs to restore the economy, is completely absurd in reality. The first ten of the Ukrainian business in reality is out of sight and empty - indeed, only Akhmetov has a serious condition. A shaft of corporate defaults is moving to Ukraine, which will be aggravated by political instability and the expected consequences of a gas war.

The state of the banking system is no less peculiar - it has comparatively little, but it was weak even before the crisis and will not sustain the rate at 10,5-11 for UAH. Meanwhile, none of the potential donors will allow Kiev to burn foreign exchange reserves, saving a clearly unrealistic course.

The desperate rush of the Ukrainian oligarchs to power is largely explained by this — this is a banal attempt to solve their problems at the expense of the state, which was given the honorable role of a merchant sovereignty in exchange for cheap money. However, the political crisis in many ways further aggravated their situation. They have nowhere to retreat - behind the offshore accounts and vigilant agents of the FBI, already beginning to punish a lack of enthusiasm.

Meanwhile, the east and south are already less and less submissive - even before the economic “ideal storm” has advanced to Ukraine. Hopes for the Marshall Plan (massive Western aid) are not yet justified. Thus, direct assistance from the United States limited $ 1,150 billion, while 1 billion is not cash, but debt guarantees. EU assistance is also limited - the impressive figure of $ 11 billion actually hides vague promises to give money "sometime later" and, if possible, long periods and the same "lifeless money."

As a result, probably in Kiev they decided to move along the traditionally African way of forming semi-partisan detachments of marginalized and youth. At the same time, it is not possible to create truly combat-ready divisions of the administration of Turchinov — however, an obvious mob can be used as punishers.
The problem is that the convulsive throwing of the Ukrainian authorities create additional economic problems that until recently were difficult to imagine. While the Ukrainian army burns fuel in meaningless forced marches, and the refineries are idle, there is growing evidence that rumors about the success of the sowing campaign are greatly exaggerated, despite the vigorous statements of the Ministry of Agrarian Policy. Exchange prices for cereals and sunflower oil, one of the key producers of which is Ukraine, have grown explosively. The main players have well-founded doubts about the stability of supply - for example, the ministry has already asked the Ministry of Energy to sell 10 thousand tons of fuel at a preferential price, while judging by the tone of the request and reservations about alternative sources, there is no certainty that fuel and lubricant reserves are sufficient , not.

In other words, in the current situation, a banal default and a sharp drop in the standard of living seem to be an increasingly optimistic scenario. In reality, by the end of 2014, the picture may turn out to be much more gloomy - up to food shortages in large cities, massive heat and power cuts and other typical signs of a revolutionary situation.

Ctrl Enter
Noticed oshЫbku Highlight text and press. Ctrl + Enter
We are
New plants and workshops in Russia in 2014 yearAs NATO instructors in the territory of a military base in Estonia, trained Ukrainian nationalists
Military Reviewin Yandex News
Military Reviewin Google News
139 comments
Information
Dear reader, to leave comments on the publication, you must sign in.