March 16 2014
780
Crimea. 16 March 2014 of the year. The referendum took place, culminating in the unconditional victory of the supporters of the entry of the Crimea and Sevastopol into the Russian Federation.


The referendum was held under unprecedented pressure from Western "friends of Ukraine" and the Kiev self-proclaimed government. Calls to members of election commissions with threats of physical violence, blocking an electronic database of Crimean voters in the capital of Ukraine, conversations. Both the “friends of Ukraine” and the junta of the Ukrainian capital, trying to take away from Kiev not only its centuries-old Orthodox dignity, but also the legendary title - the title of the city-hero (such a bill was introduced into the “Radu” by zealous lawmakers from “Batkivshchyna”) decided that it is they and only they who are entitled to determine the fate of the Crimean peoples. Not the Crimean peoples themselves, but Bandera's insignificance and his note puppeteers ...

It is these “gentlemen” who make some ridiculous plans for the Ukrainian people, for the Crimea, without even trying to justify their actions by international rules and regulations. And they do not try to justify for the simple reason that there are neither such norms nor such rules, where it would be said that the people’s fate is not decided by the people themselves, but by a gathering of outsiders dancing to the tune of star-striped geopolitical ambitions - such ambitions, according to which the United States does not want to leave their track of their own exclusivity. Well, if they don’t want it themselves, then this “hard-nosed sheep” on a strong rope will pull the emerging geopolitical process onto a “operational space”.

On Crimean land, 27 territorial election commissions and more than 1200 polling stations were formed and conducted their work. In total, 1,515 million Crimeans were registered as potential willors. The turnout was a record. None of the previous elections at the polls did not come as many voters as March 16, 2014. Historical day in every sense of the concept.

Monitoring of the voting process was conducted by more than a hundred and fifty representatives of various foreign institutions from 23 countries of the world: Slovenia, Finland, Greece, Spain, Latvia, Belgium, USA, China, the Czech Republic and other countries, including, of course, the Russian Federation. Observers represented not only the so-called human rights organizations, but also very weighty state structures. Even before the start of the voting, several representatives of the EU observation corps were very eloquent about the assessment of the preparation and conduct of the referendum. So, according to the deputy of the European Parliament Bela Kovacs, the referendum in the Crimea is completely legitimate.
Bela Kovacs at a press conference in Simferopol:

The Crimean people, like all other nations, have the right to express their own opinions. In this case, by referendum. This referendum is absolutely legal. Democracy is such a thing, and people have the right to determine their future.
Another MEP - Charalampos Angurakis - stated that he fully recognizes the right of people to express their opinions and openly perplexed about the fact that someone had already tried to a priori recognize the referendum in Crimea illegitimate.

It is, of course, the opinions of Kovach and Angurakis - a trifle, but this trifle demonstrates well the state of affairs in the West itself, which 25 systematically lost its sense of reality over the past few years, feverishly trying to adjust international law to the interests of the States. Now there are people among European parliamentarians who understand that from endless idolatry addressed to the United States to them personally, like the states whose citizens they are, neither hot nor cold ...

Several television companies organized live broadcasts from polling stations in different cities of Crimea. Kerch, Simferopol, Feodosiya, Yalta and separately - Sevastopol, which before the official announcement of the results of the referendum was not administratively part of the Crimean Republic, but was a separate administrative entity on the peninsula.

Live broadcasts of the plebiscite is an important moment. These broadcasts are an excellent reason to show everyone who has so far confidently repeated “insanely low turnout” and “falsification” in the Crimea that “insanely low turnout” and “falsification” is, as one well-known person says, "Someone's Wishlist." People from the very first minutes of voting went to the polls in order to cast their vote. Heavy rain did not stop. By noon, many polling stations in the Crimea and Sevastopol became so crowded that long queues began to form. Members of election commissions on the ground, in conversations with journalists, said that for the entire time they had worked in such commissions (and many had given up this kind of activity for more than 20 years), they had to see for the first time that even before the opening of the polling stations, people the streets, waiting for the opportunity to make your choice.

Completely different people and by age, and, obviously, by political views. But in these crucial minutes for the peoples of Crimea, most of them united one thing. What? This could have been judged by the first polls of Crimeans who left the polling stations: naturally, this is the answer “yes” to the question about Crimea joining the Russian Federation, about returning Crimea to home. People talked about it simply and without pathos. 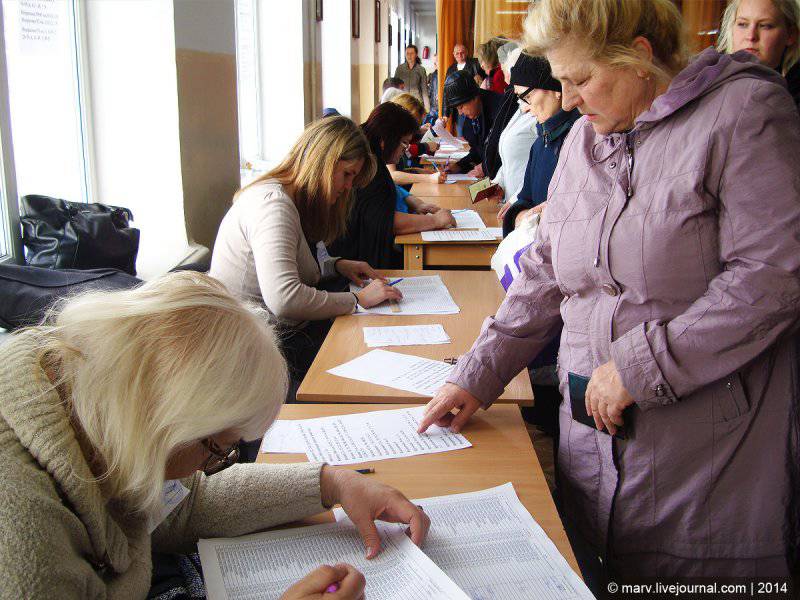 Now we need to remember Ukraine ... - I got into one of the live broadcasts of RT channel the exclamation of a woman who, with a wave of her hand, dropped her ballot in one of the transparent ballot boxes. Several other voters answered with a smile.

Perhaps, the exclamation of this woman is the quintessence, if you like, the motto of not only the Crimean referendum itself, but of all that has happened lately on a vast territory in the center of Europe, still bearing the name of Ukraine.
Prior to the start of the referendum, there were people who, hoping to see at least some anti-Russian spirit during the plebiscite, stated that, they say, the Crimean Tatars would precisely boycott the referendum. They say that these will definitely not go to a referendum, since they are “for the Maidan”, “for Europe” ... However, the Crimean Tatar population of Crimea actively participated in the plebiscite. Bakhchisarai, in which representatives of more than a dozen nationalities live (the Crimean Tatars, Ukrainians, Armenians, Russians, Greeks, Jews, etc.), showed its turnout records. 50% turnout in Bakhchisarai, which pro-ordered activists in Ukraine and Russia so "hoped", passed less than 4,5 hours after the opening of the polling stations. 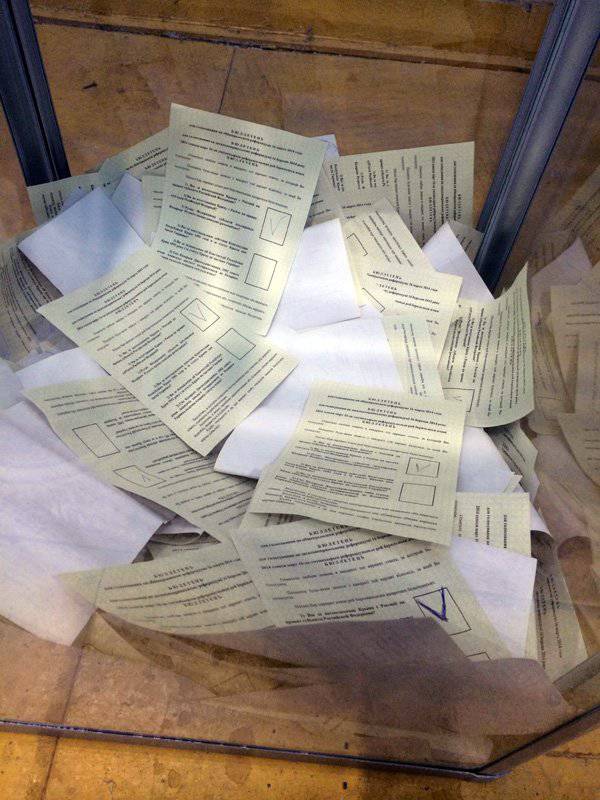 Against the background of the referendum, as one well-known substance in the hole, Ukrainian radicals rushed in impotent rage against the will of the Crimeans. The gentleman, whose hands are in the blood of Russian and Ukrainian citizens, and he is the future candidate for the presidency of Ukraine (in today's Ukraine this combination turns out to be quite acceptable ...) Dmitry Yarosh decided to remind himself of a statement on the page of the Right Sector that he had spite of Russia will blow up the pipeline connecting the Russian Federation with Europe. And how Europe is ready to rejoice at such statements, and the Ukrainian economy will be even more delighted ... As they say, I’ll freeze my ears out of sight ... Or maybe again the "vile provocateurs from Russia" page "PS" hacked and defamed the "peaceful" Dmitro ...

But all of this radical foam, with all its current active hiss, sooner or later will come to naught either by itself or with the help of those who in Ukraine will finally wake up from maydanny hypnosis.

During the referendum, the websites of the official authorities of the Crimea were subjected to numerous attacks. According to cybersecurity experts, the attack on the site, created to cover the course of the Crimean referendum, was conducted from the territory of the United States (Illinois). On this occasion, the social networks appeared such graphics: 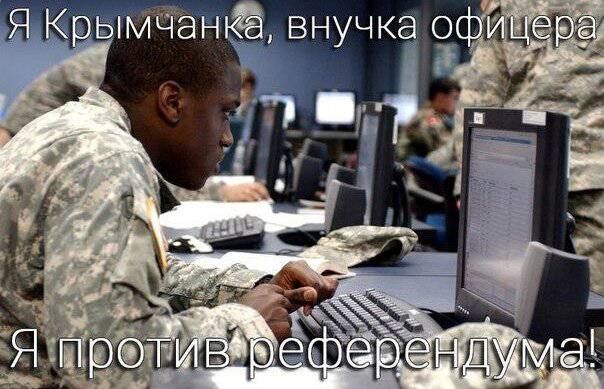 But in spite of everything, Crimea made its choice, showing the world that there is democracy in the true sense of the word, not slandered in all the past years. 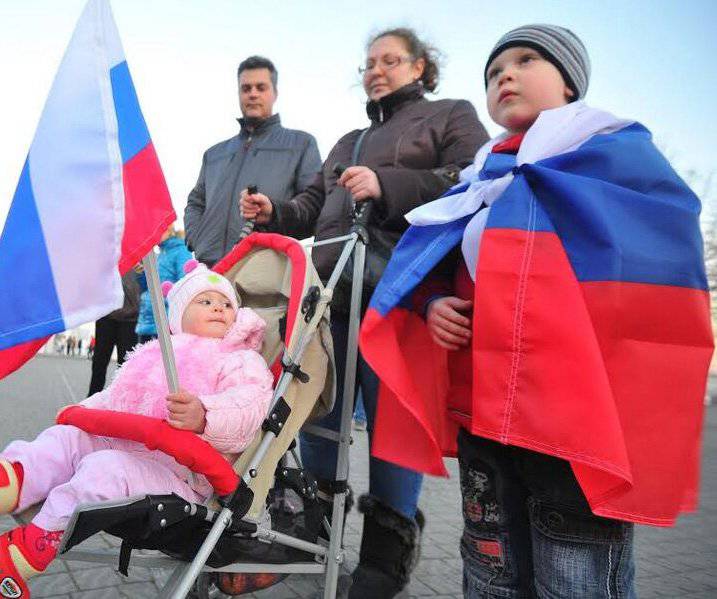 Welcome home, Crimeans! We have been waiting for you for so long!

Ctrl Enter
Noticed oshЫbku Highlight text and press. Ctrl + Enter
We are
Russia, Turkey and the "Crimean Question"The head of the Moscow community of the Crimean Tatars: "Russian - former slaves, hereditary slaves." On the threat of the revival of the Crimean Tatar predator
Military Reviewin Yandex News
Military Reviewin Google News
780 comments
Information
Dear reader, to leave comments on the publication, you must sign in.