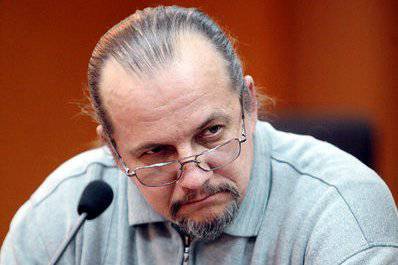 The information and analytical portal "Empire" together with the Institute of Information Wars (Moscow) is launching a new project - a weekly survey of experts on the most topical issues of the week. Portal questions were answered by Sergey Malakhovsky, political scientist, chief editor of the portal BaltijaLV.LV:

- Your assessment of the prospects for the development of events in Ukraine - will Russia stop at the Crimea and how will events proceed further in the South-East?

- I sincerely want to be sure that the Crimean scenario will be applied in the Southeast. I am a man of rather radical views and would welcome the return of the Russian territories that had been rejected in their time. But I think this will not happen - the Russian authorities are so diligently observing all the points of international law, that involuntarily you begin to think that after "forcing Ukraine to common sense" in the Crimea, Russia will stop. That is, the rest of Ukraine will remain in the old borders, but ... perhaps with great autonomy in the South-East. Which, as a region that feeds the entire state, will gradually acquire a dominant role in all Ukrainian politics.

In this case, the post-conflict development of Ukraine is not so important - I am sure that Vladimir Putin will not allow anything that would be contrary to the aspirations of the people in the country themselves. Here another thing is important: the attempt of a broad offensive on the anti-Russian front through Ukraine finally provoked a Russian awakening. And, I dare to hope, this wave will not just calm down - they are trying to criticize Russians not only in Ukraine ...

- What sanctions can the US and its partners apply to Russia, and will there be any sanctions at all?

- All currently listed sanctions, such as the threat to exclude Russia from FIFA or freeze accounts in the United States - this is by definition already ridiculous. But if Russia, for example, withdraws from the START Treaty, or - a terrible nightmare for the entire West! - they will take a couple with China and give up the dollar as a reserve and settlement currency ... It will not seem to anyone. And somehow it was so strange that right before the start of talk about the imposition of sanctions, both Russia and China “let go” their national currencies - a significant coincidence, don't you find?

I don’t understand what serious sanctions can be taken seriously (sorry for the tautology). Russia is no longer the helpless country of the Yeltsin model, and any pressure attempt can respond a hundred times harder and more painful.

- How can Russia respond to these sanctions, and in general, is it worth worrying about them? Is there such a scenario, when, on the contrary, Russia can use these sanctions to its advantage?

I already wrote above that Russia can do with the help of these "sanctions urges." Therefore - yes, let them finally stop chattering, screaming and threatening in the West and trying to impose at least some sanctions. Thus, they will simply untie Russia’s hands and free it from unnecessary obligations. Try it, ladies and gentlemen!

Ctrl Enter
Noticed oshЫbku Highlight text and press. Ctrl + Enter
We are
A great interview with Sergey Lavrov: about Ukraine, Obama and IranWhat you didn't want to know about England
Military Reviewin Yandex News
Military Reviewin Google News
157 comments
Information
Dear reader, to leave comments on the publication, you must sign in.