Why Putin is calm and why Obama is nervous 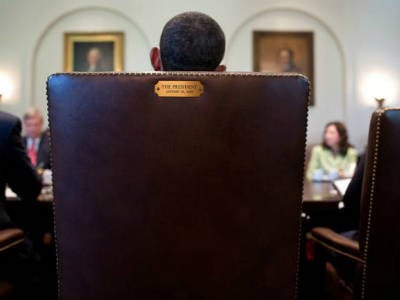 Amazing things we see lately. The president seems to be the most powerful country scribbling statements to the public as from a machine gun, threatening sanctions against Putin, his entourage, Russian officials, businessmen, deputies, Russia, and all “ours”. European leaders began to speak after him. Vied They are echoed by foreign ministers. But the gleam in his eyes while some kind of unhealthy. Why are they so nervous? - After all, Putin is silent. Once only spoke on the case. And very friendly. And they still do not let up. What is the reason?


To do this, you need to go back thirteen years ago and remember 11 September in the USA. Politically, the United States then received the right to re-arrange the world at will. Russia was the first to support the United States in their struggle against the terrorist threat they themselves created. Has Russia received anything in exchange for this? Of course. The United States left the Eurasian region to fight with its windmills and mired for a long decade in the affairs of the Middle East and Afghanistan. Russia received time in exchange. A relatively calm decade for the development and accumulation of forces, which, as the events of today show, has not been wasted: the gold reserves are at a sufficient level, the salary is decent, the army is practically reequipped, the industry is working, etc. Of course, there are many more problems, but who is it easy now? The people over the past two or three years have quenched the economic hunger and demanded a return to imperial Russia.

Everything? No, not all. Russia received a decade of high oil prices. We agreed on this matter with Bush and the Republicans, or, of course, everything happened by itself, today it does not matter. Nevertheless, the whole world was put at attention. Europe and China were forced to buy expensive oil and gas. China was able to maintain the pace of development, but Europe is not. We cut down our financial gesheft, our Americans. Since then, besides, we have grown politically, they have decreased. 2013 showed this year especially clearly. This year, the situation continues to deteriorate for the United States.
And against this background, the rightists, who, like, republican hawks, begin to press Obama in full and press him on the back - they say, go to war with Russia, impose sanctions, that you are like a boy, you are bothering you, you’re driving a finger on the glass? You see, and the rating falls - the people are already dissatisfied with such a chamomile president.
Obama started up at the beginning of the year, but then he felt a trick, and got nervous. But he doesn’t know what and where (let me remind you the first rule of 90's business - “if you don’t see a sucker in the scheme, then this sucker is you”), that's why he fusses. Makes one statement after another, provoking Putin to respond. Our silence that drives Obamku even more into a stupor. Already, the meeting with the Prime Minister of Ukraine Yatsenyuk, who proclaimed himself, did not work.
Merkel, too, on horses and on the nerves. Everyone understands what is happening with a woman, even a German woman, when she is both on horses and on nerves. On the one hand, the Germans announced a change in the basic slogan of the post-war foreign policy and are now ready to actively participate in shaping the “global agenda”. The Americans are good for them, we have been waiting for a long time, otherwise some are already tired, let's press the Russians together. However, the Germans felt a trick.

And it's not just that, as Hitler said, the Americans are far away, and they will block the gas not by him, but by Germany, and not by having to pay much more for oil and gas, which can put the economy of the whole Europe in general . And the fact that this may not be a purely American game, against which, like, Russia is now actively playing publicly, saying to Europe - “Don't you see, are they going to кон untangle you?” We are with you with all our hearts, let's throw Americans together. ” The Germans are afraid that all this is not a purely American game, but that the Russians and the Americans could agree on this among themselves, as they already did in the 2001 year, when they led everyone to grandmothers. What prevents to do it now? From here and nerves.

After all, if you think about it, it may well be so. Americans put pressure on the one hand, Russians on the other. With whom you disagree, and the Americans, like, are stronger (for the time being), which means that you have to go under them, it will still be bad, because then one and the other will turn away in any way. The Americans, when they reach their goals and reconnoiter Europe, will out of habit say: “Thank you all, everyone is free.” The Russians, too, “You decided to play against us against the Americans, well, you will get it.” We can’t go with the Russians against the Americans at all, because then these brave guys on T-90 will have to meet with bread and salt in general ... In general, wherever you throw, wedge everywhere.
And this wedge guys are already very sensitive.

Russia (Putin) is sitting quietly and not blowing at all. These have already gone to the third round of sanctions, but Russia is silent. Most likely, the Americans will crush Europe, they will stick up, after which the Americans will throw them, and the Russians will take revenge. This is where Europe will become fascinated. The Americans finally liquidate Europe (read Germany) as an independent geopolitical and economic force, and Russia will eventually reorient gas and oil flows to the Asian market, which should grow 2030 times before the year, unlike in Europe, where industry stagnates and impressive " growth "green energy".

And the sanctions are not so simple - the Americans will introduce something, and the Europeans will pay. If this is so, then the Germans are still ready to accept this construction. But if the Russians are in the subject with the Americans, then this, in their opinion, will not go into any gate anymore. Therefore, the Europeans stomps and hooks - and I want to curry favor with the Americans, and keep my considerable gesheft.

But still, the question remains open - if the United States is on topic, then why is Obama nervous? Yes, precisely because he himself is not in the subject line, he is being played in the dark - some stars and stripes play together with Putin on the same team and remove all the cream from the growth of prices for energy resources on a global scale, and they switch to him as loser Naturally, this situation can not like. But to do nothing in return, as well as to change the alignment, Obama cannot - he has already outlined his personal personal vendetta to Putin for the 2013 year. He cannot come out of one table, sit down after another and say - “guys, am I with you, where are my chips?” - they will simply expose him from the table, give him a towel and a pen, and call the menu.

Those. what do i need That, most likely, Putin, as in 2001, agreed with the real masters of America about a new big deal for the grandmother of all the other big and small geopolitical players. Russia will receive a growth of influence and money, America also money and Europe. But it seems that those guys are quite happy with it, apparently, they have their own handouts with Finintern or some other money changers, they also need grandmothers for war. The alignment is as follows: they simply print candy wrappers, we cannot do this, but we have oil and gas, so what are the problems so that the same, with such hard-to-do volume, cost two to three times more. They will print something for themselves, but half will go to us. So, once again, I am convinced of the loyalty of the popular-diplomatic saying that it is much better to conduct business and politics with the Republicans than with the Democrats.

It seems that the only potiha still catches the alignment are the Chinese, who are just silently watching everything, knowing full well that this is a “major league” and we still have to grow a little to play geopolitical preference at the same table with Russia and the United States.