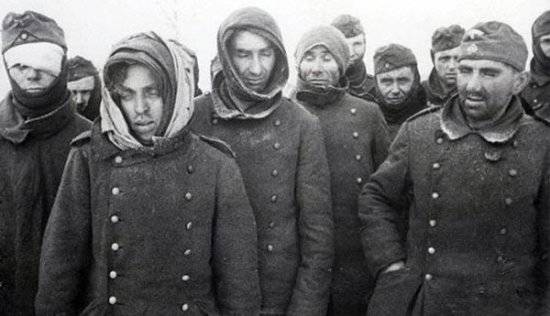 In Germany, a book entitled “Soldaten” (“Soldiers”) is published, in which are presented excerpts of conversations of German prisoners of war recorded by the British special services.

The record was kept in a temporary prison camp that was located in Trent Park in north London. In the hope of obtaining important information, British intelligence agencies recorded some 13 000 conversations, the printout of which occupied the 150 000 pages. As a result, quite shocking conversations of German soldiers about how they killed defenseless people were recorded.

Here, for example, is an excerpt from a conversation between three Luftwaffe pilots: “I was over Ashford. There was a meeting on the market square - a lot of people, speeches, and stuff like that. They did not even have time to run up! It was so great! ”

The interviewer did not lag behind: “We attacked Eastbourne on a low-level flight. There was a big house where the ball was held. Many women in evening wear and orchestra. At first we just flew by. Then they turned around, and that's when I poddal them! Old man, THIS was great! ”

Here comes the third: “In the squadron I had a reputation as a professional sadist. I knocked everything down: buses, a civilian train in Folkestone ... I shot every cyclist. ”

It should be noted that similar sadism was demonstrated in general by the most ordinary Germans (however, one should not forget that the Luftwaffe, the German Air Force, was the patrimony of Goering, the patented sadist; most likely, his personnel officers also selected them).

Here is another example, recalls one of the pilots who took part in the attack on Poland in 1939: “I had to destroy the station, but eight of the sixteen bombs hit the houses. I didn't like it at all. On the third day I didn’t care, but on the fourth day I started to like it. It was good before breakfast to hunt in the fields with a machine gun on the soldiers ... "

German historians Harald Welzer and Sonke Naytsel, who prepared the book for publication, found these records collecting archival materials about the underwater war. In addition to the stories of German pilots, the memories of German submariners and soldiers and officers from other units of the Third Reich also fell into their hands. Here is another passage - about the desire with which the soldiers of the Wehrmacht took part in the Holocaust: “An invitation came from the SS to shoot at Jews. Our whole company took guns and guns and killed them. Everyone could choose a goal to their liking. ”

For the sake of justice, it’s worth saying that there are others in the book stories. For example, about how a senior Wehrmacht officer with anger attacked a young lieutenant, who enthusiastically told about the rape of a Russian woman, who was then thrown with grenades. But such cases are more likely an exception to the rule. In general, the coming book dispels the myth of the nobility of an ordinary German, a simple soldier, not a member of the Hitler party, who for one reason or another was forced to go to the front.

Certainly the book coming out will cause in Germany, in whose public opinion the point of view of the Wehrmacht soldier was affirmed, like a wide resonance to the innocent victim of the Hitler regime. Although for many it will not become a German revelation. For example, in 1995, several experts organized a traveling exhibition on the role of the regular army in the Holocaust, but under a hail of accusations of falsifying history, they were forced to abandon the idea of ​​permanent exposure.
Ctrl Enter
Noticed oshЫbku Highlight text and press. Ctrl + Enter
Military Reviewin Yandex News
Military Reviewin Yandex Zen
24 comments
Ad