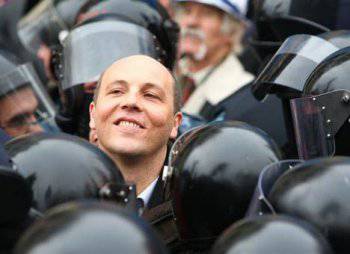 John O. Brennan, director of the CIA World Spy Forge, looks like an astrologer-sharper, who was finally caught by the hand. The American congressmen are annoyed and feel that they have been swindled. They express extreme dissatisfaction with the quality of the intelligence information provided to them. The CIA does not really know anything about the processes in the post-Soviet space. The CIA was unable to even predict the obvious: the development of the situation in Ukraine. The main American Spy Brennan parried: yes, Russia may well invade the territory of Eastern Ukraine. Yes, only Putin knows about whether this will happen.


But the CIA is not omnipotent. Of course, said in response to the accusations of Brennan, the congressmen want the CIA to predict the future: will the Crimea become Russian, will Russian troops not enter Eastern Ukraine. But in the former USSR, the main role in decision-making so far belongs only to individual leaders. The distribution of information is almost zero. And the CIA is still not technically able to read Putin’s thoughts. There are no such spies in the world who ... and yet, if we increase funding a little bit more ...

It is unlikely that such helpless arguments justify American high-class specks, for the maintenance of which the States spend hundreds of millions of dollars. The export (mainly for the third world countries, Eastern Europe and the boobies of the former USSR) American action movies and TV series glorify these deft and incredibly mobile detectives with IQ for 300 and flammable sex for Fahrenheit. The offices of the intelligence agencies are not spy shops, but spacecraft: thousands of luminous monitors, face recognition programs around the world, satellite images of terrorists in their own bathrooms, search programs of criminals by body temperature.

Why is it so difficult to measure the temperature of Putin? 36,6 - asleep. 36,8, dilated pupils, increased heart rate and sweating - are unkind.

No, real spits are very boring: they are happy to absorb the green dollar mass, point a finger at the sky and, as always, make mistakes. Tapping the keyboard “Putin decides for himself what he wants after dinner” - maybe even a Russian first-grader, knowing nothing about the CIA

The NSDC Secretary, Andrei Parubiy, also does not have an IQ for 300. But there is a plan "B". In case Russia decides to implement the Ossetian scenario. “Of course, plan“ B ”exists, of course, plan“ B ”is described in detail, and plan“ B ”will be put into operation very quickly. But I have no right to give his details here, now ", - shared with the public his thoughts on the plan "B" Paruby. Disappointing conclusions can be drawn from this detailed report of the NSDC.

The existence of plan “B” means that plan “A” has failed. Plan “B” is a failure, and no one remembers it. But less disastrous than the future plan "C", which does not exist. They say there is also a plan “D”: Paruby gave a secret order to take out grape cake from the Crimea, so that at least the moonshine would not get to the enemy.

The United States, having learned about the brilliant plan of Parubiya with the letter “B”, possibly having secretly secret the unknown name (the gang of the get-away? Mess? Boulty? Run? Bug)? Immediately rushed to develop their own. Here is the first thing that came to their mind: if Russia annexes the Crimea, then in the fall, Georgia will receive a plan of action for NATO membership. About this "Kommersant" reported mysterious sources in the State Department and the headquarters of NATO. “Russia's actions in Ukraine provoked a return of the debate on the need for a more determined Alliance policy in Eastern Europe. Even the representatives of the states who recently called for not to force this issue started talking about the fact that Tbilisi’s application should be satisfied. ” (in 2008, France and Germany opposed the provision of a MAP to Georgia and Ukraine).

Here you go. Everything finally fell into place. This is a plan known as MYHOHONASHPRO ("Russia, we have long wanted to crawl with our missile defense system under all your sides").

But while the States hurriedly placed toy rockets on a pretentious desktop map, a hungry and enraged Russian bear climbed out of a den and developed an unprecedented speed. The United States is shocked, scolded intelligence, they write threats. The usual mistake of those who have seen the louder bears only in close enclosures of zoos. In fact, they are angry, they eat meat and quickly follow it outside their territory.

In addition to the plan "A" (we say Georgia, we mean NATO), the West has a more sophisticated plan "B" - to separate Russia from the dollar system (which will only play into the hands of Russia and China, who have long been planning to get rid of the dollar). For example, the New York Times and the Wall Street Journal report that the White House is developing tough, comprehensive economic sanctions aimed at isolating Russia in Europe and the world. Especially in Europe. And in the world.

But pragmatists — merchants and industrialists — have already stated that the costs of implementing such unprecedented measures may far exceed the benefits. According to them, the most “The ruinous options will repel economic allies and provoke an uncontrollable cycle of retribution”. The key word is "allies." The US main burzhuiny have a huge impact on the decisions of the American administration, and their interest in partnership with Russia - is expressed in numbers with many zeros. Officially, the United States receives an annual $ 40 billion from trade with Russia. But American companies claim that this volume clearly does not take into account real economic ties. For example, they forgot about two Ford assembly plants in Russia, working with European raw materials. Or about the “Boeing” purchased by Russia and the CIS (according to forecasts, this is another $ 140 billion over 20 years). Boeing generally works closely with Russian aerospace engineers, uses Russian titanium in the most important structures of the aircraft (in 2014, the company planned to allocate $ 18 billion for titanium purchases), and unique titanium parts for Boeing are cast only in the Ural titanium factory. And all this - only the tip of the economic "alliance".

While the countries of the world, integrated into the dollar system, study and digest the threats of the United States, the American Lakota-Sioux Indians who are familiar with the terms "occupation", "genocide", "intervention", "reservation" continue to undermine the seeming power of the United States from within . The descendants of the Red Cloud and Sitting Bull invented their own national cryptocurrency MazaCoin and published 25 million digital money. This money can be a guarantor of ridding Sioux from poverty, MazaCoin creator Payu Harris is sure. 98% of the 100-thousandth population of the tribe still live below the poverty line, and if the Indians enter their own currency, the US authorities will not be able to take revenge and freeze Sioux bank accounts. Some South Dakota businesses have already agreed to take MazaCoin along with dollars. MazaCoin virtual money even appeared on some online cryptocurrency exchanges. The US Federal Bureau of Investigation, of course, warned the stray red-skinned that their cryptophanies, unlike American green candy wrappers, do not have legal status. But the Indians, brought to despair by pale-faced colonists, showed the White Wigwam the famous Nulandian factor and generated another 500 MazaCoin - in sacrifice to the Great Spirit, in the name of the wealth and prosperity of the Indian people. And for the bison to fill the prairies again.

The Chinese and Russians are just learning from the Indians of courage and speed of reaction.

The White House is threatening Native Americans and is wondering when to impose sanctions for Putin, but gas-bearing Russia is carrying its own plans, "A, B, C." Perhaps, through the Crimean territory recalled back after the referendum, she will want to build a piece of her own fostered South Stream — while making it cheaper for billions of dollars. Crimea will only benefit from this. And the problematic eastern and southern pieces of the European Union - Bulgaria, Serbia, Hungary, Slovenia, Croatia, Greece - will lose. After all, it was not once officially recognized that the South Stream could be a panacea for unemployment, a salvation for the economy and a reincarnation of the investment environment for them. In return, the West cannot offer anything to these countries, but with increasing aggressiveness, and long before the Ukrainian “revolution” and the Crimean “occupation”, it gamblingly puts the stick project into Gazprom’s pipe.

Meanwhile, Ukrainians are busy in their own dung heap, looking for reasons to hate. Hatred is the only Ukrainian pleasure, for which there will always be queues. They hate Russia and the neighboring southeast. They hate the Crimea, which is "dependent" and "let it roll." They hate the CIS and promise to get out of it. They hate the government: yesterday, today, tomorrow. Hate oligarchs, who after the coup even more comfortable in their seats owners of the Ukrainian energy monopolies illegally removed from state ownership. Hate tariffs for utilities, which will increase in April. The Deputy Minister of Finance, who promised this increase today, hates "reassuringly," adding: “Unfortunately, this is part of the price we have to pay.”. We or you?

That is the last question you want to ask in this dying country.

Ctrl Enter
Noticed oshЫbku Highlight text and press. Ctrl + Enter
We are
A great interview with Sergey Lavrov: about Ukraine, Obama and IranList of destroyed the largest and most high-tech enterprises
Military Reviewin Yandex News
Military Reviewin Google News
106 comments
Information
Dear reader, to leave comments on the publication, you must sign in.