Kiev junta just do not need such a big Ukraine 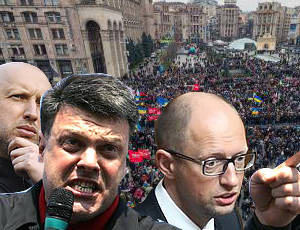 Could the Kiev junta become a legitimate Ukrainian government throughout the republic within the boundaries of 2013 of the year? Easy. For this it was necessary:


1. To recognize Russian as the second state language. Instead, the Kolesnichenko-Kivalov compromise law, which guaranteed Russian rights to certain rights according to the European Charter on National Minorities, was abolished first. Then, waiting for the indignant reaction of citizens, the junta added fuel to the fire. Multiple claims have been made that repealing the law so far is not timely. It was constantly emphasized that the complexity of the moment forced a new power to temporarily postpone the resolution of the language issue. To top it off, it was announced that a commission would be created to develop a new language law. One of the members of the commission was Irina Fahrion - a deputy of the Ukrainian parliament and part-time reference Russophobe. This is so that no one even has an illusion about the sincere intentions of Kiev.

2. Allow all issues to be resolved (except for secession from Ukraine) in regional referendums. That is, to meet the people's rallies in Lugansk, Kharkov, Donetsk and Odessa. To transfer their energy from protest actions to a completely peaceful collection of signatures. Instead, the Kiev junta began to conduct counter-counts calling for the inadmissibility of any revision of relations between the center and the regions. Naturally, such actions should lead to the fact that the South-East will no longer consider itself Ukraine. This has not yet fully occurred, but the effective actions of the junta in the collapse of the country suggest what might happen in the coming weeks.

3. Initiate the reform of local self-government, transfer to the regional level a significant part of budgetary and managerial powers, take a course on federalization. That is, to shift part of the responsibility for the incipient economic collapse to the regions and local authorities. Instead, Kiev suppresses attempts at self-organization (the arrest of Pavel Gubarev, the arrest of Arsen Klinchaev), appoints the extremely unpopular oligarchs among the people to the governor’s posts. And it is in the South-East. Nobody offers, for example, Igor Kolomoisky as the governor of Ivano-Frankivsk region (in which he also has many assets). No, it is needed precisely in Dnepropetrovsk - exactly where the conflict is deliberately provoked.

4. To solve the Crimean question by negotiation (not to mention the fact that the crisis arose precisely because the junta purposefully undermined the country - see pp. 1 – 3). Instead, some kind of counter-terrorist operation is being prepared, the consequences of which will certainly close Ukraine to any hopes of the existence of the state, plunging the republic into chaos.

5. Take control of the country. Instead, Yulia Tymoshenko went to Germany for treatment (German doctors note that her Ukrainian colleagues could easily cope with her Ukrainian colleagues, but the former prisoner apparently does not stay at home), Arseniy Yatsenyuk consults in the US, Vitali Klitschko travels without authority in Ukraine. Who controls Ukraine? Pastor Turchinov does not control, "Right Sector" also does not control. In fact, no one controls. The rioters laid a bomb and, knowing full well that they were going to jerk soon, they themselves fled in different directions.

6. Transfer the civil conflict from the hot stage to the cold one. For this there is such a technology as elections. However, no one is preparing for the elections. Ukrainian TV (obviously, not without the sanction of the owners of the national media) is already waging war with might and main - as long as imaginary. But with such perseverance that it can become real.

So, again, the Kiev junta could do, wish it to become the legitimate government of Ukraine within the boundaries of 2013. They do exactly the opposite. Therefore, neither recognition throughout Ukraine, nor the 2013 border of the year is an end in itself for them. Judging by the persistent desire to be somewhere far away from Ukraine and the responsibility for what is happening in the country, first of all they are interested in the issue of personal security.

If we talk about far-reaching plans (in the conditions of accelerated scrolling of events - this is somewhere in the 2014 year perspective), then the goal of the new government is to legitimize in the territory of the western and central part of Ukraine. Including, of course, Kiev. The future will show if there is any flaw in this strategy.

Ctrl Enter
Noticed oshЫbku Highlight text and press. Ctrl + Enter
We are
What you didn't want to know about EnglandThe logic of Russophobia
Military Reviewin Yandex News
Military Reviewin Google News
77 comments
Information
Dear reader, to leave comments on the publication, you must sign in.