March 13 2014
2
A few days ago, Turkey began testing a new missile system of its own design. The Roketsan company conducted the first test launch of a new anti-tank guided missile designed to equip attack helicopters. An experienced MIZRAK-U rocket, launched from an AH-1S helicopter, reportedly successfully hit a target at a distance of about a kilometer from 3,5.


Tests of the new missile complex will continue in the near future. Over the next few months, Turkish specialists are planning to complete the finalization of the project and bring the characteristics of the anti-tank missile to the required level. According to current plans, the mass production of MIZRAK-U missiles and auxiliary equipment for them should begin as early as next year. The carrier of the anti-tank complex will be a combat helicopter T129, the development of which is conducted by a joint venture of Turkish Aerospace Industries and AugustaWestland.

The anti-tank missile system MIZRAK-U was first unveiled in the middle of January this year at the Bahrain International Airshow 2014 Bahrain Air Show. It should be noted that earlier this rocket had a different name. Under the designation UMTAS, the new missile system has already been demonstrated several times at various exhibitions.

The promising guided missile MIZRAK-U is designed to destroy various enemy armored vehicles, primarily tanks. According to official information, a number of technologies and technical solutions have been applied in the design of the anti-tank missile, ensuring its high performance. So, a rocket with a launch mass of about 37 kg, equipped with a solid-fuel engine, can hit targets at ranges up to 8 kilometers.

At a recent exhibition in Bahrain, it was argued that the MIZRAK-U rocket could use different types of homing systems. To ensure the work of the "shot-forget" rocket must be equipped with an infrared homing head, capable of finding targets at a great distance. In addition, the possibility of using semi-active laser guidance. In this case, the helicopter armed with missiles will be able to work with third-party target designation, and ground units will carry out the target illumination. If necessary, the rocket electronics is capable of transmitting data to a helicopter carrier.

According to official data, the latest Turkish anti-tank missile will be able to destroy armored targets that use additional protection. MIZRAK-U missile is equipped with a tandem warhead, which, allegedly, allows you to successfully hit targets equipped with dynamic protection systems. 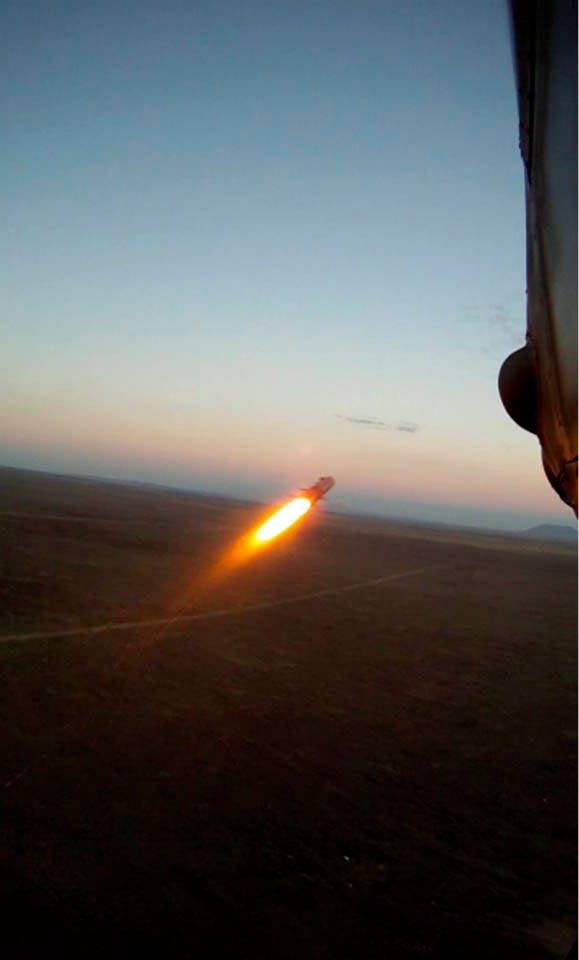 The main helicopter carrier of MIZRAK-U rockets is T129 attack helicopters. Earlier it was reported that the UMTAS missile system can be used on carriers of other classes. According to previous reports, the anti-tank missile system can be installed on helicopters, light strike aircraft, unmanned aerial vehicles with suitable characteristics, ground transportation or stationary platforms. Apparently, after the name change, the UMTAS / MIZRAK-U rocket retained this possibility.

The product MIZRAK-U is capable of hitting targets at a distance of up to 8 kilometers, and for this reason it is classified as a long-range anti-tank missiles. Simultaneously with the MIZRAK-U missile, a medium-range munition called the MIZRAK-O was introduced. Both rockets have a high degree of unification, which should simplify their mass production. The main difference between rockets is used in a solid-fuel engine. The power plant of the rocket MIZRAK-O provides a flight at a distance of up to 4 kilometers. Tests of medium-range anti-tank missiles have not yet begun.

To use the MIZRAK family of missiles on attack helicopters, a special launcher is proposed. The unit weighing about 60 kg has nodes for the suspension of four anti-tank missiles. An interesting feature of the launcher are hinged covers that cover the nose flares of rockets during transport and their homing heads. Before starting the lid folds back and does not prevent the rocket from moving off the guide. The helicopter launcher for MIZRAK missiles is equipped with connectors conforming to the MIL-STD-1760 standard.

In recent years, Turkey has stepped up work on the creation of new guided munitions. One of the results of this was the appearance of the MIZRAK-U and MIZRAK-O missiles. In addition, the CIRIT short-range complex was recently developed and the design of a guided missile with a range of more than 100 kilometers continues.