Ukraine: it will start now. Headed for war with Russia 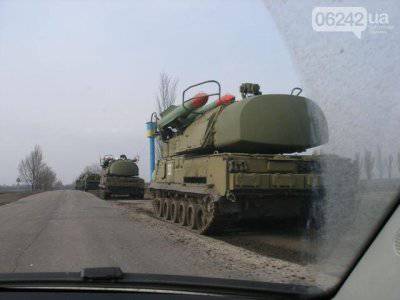 Events in Ukraine are developing so rapidly that one gets the feeling that one has only to imagine the worst, and it will come true. After a week of active, but absolutely unsuccessful protests of residents of the South-East and countermeasures undertaken by the rebels, it is possible to draw certain conclusions and outline the new Ukrainian reality.

Over the past week, the rebels took control of all security agencies on the mainland. Thus, the Security Service of Ukraine took an active part in the work and began to imprison the leaders of civil protest, and added new commanders to the demoralized militiamen and the newly certified “Berkut” and reinforced them with revolutionary political directors. Hundreds of Maidan self-defense were transferred to the regions, and now the Nazis, together with the police, are engaged in suppressing protests in the South-East.

Attempts to retain the honor of officers to refuse to carry out criminal orders end with the junta replacing them with loyal persons. The oligarchs, on the other hand, strengthened control over the regions entrusted to them thanks to mercenaries from their security structures, and Kiev attracted troops of fighters from private military companies.

The situation with the Armed Forces is no better: in addition to the theft of man-portable air defense systems and the introduction of the institute of revolutionary commissars, there is a massive replacement of Southeast officers with loyal junta people. Next in turn is the transfer of army arsenals and military equipment parks to the Nazis from the Right Sector in order to pacify the South-East.

When protests lose their meaning

In the current situation, civilian performances of the Southeast have exhausted themselves and cannot create anything more than a television picture. Now it’s just the process of letting out steam for the Russian-speaking population and draining the protest. In some regions, those who previously positioned themselves as staunch supporters of Eurasian integration are engaged in this.

There is no real success for the protest movement on the mainland, it cannot be: the insurgents seriously strengthened their positions not only in law enforcement agencies, attracted foreign political technologists and specialists in information wars, but also launched unprecedented anti-Russian propaganda and hysteria, taking control almost all media.

The Nazis from the right sector and the mercenaries will crush the discontented in Ukraine. The Southeast cannot oppose anything to them, since it has neither a regional leader, nor organizational structures, nor tools to render resistance to the Nazis. Simply put, the protest movement will be crushed, the leaders, at best, hidden behind bars, and the discontented will be intimidated.

Your scream no one will hear

It is difficult to predict whether the upcoming economic collapse and dismantling of the social security system will fully awaken the masses. Undoubtedly, some people in the country will wake up and begin to look at the world sensibly, but this will take at least several weeks, or even months, before the masses take to the streets. However, propagandists will do their work, and through the Ukrainian media, the refusal to finance the junta Russia will be appointed guilty of everything.

Thus, almost without exception, television channels and the vast majority of online media are engaged only in creating disinformation and forming the image of Russia as an enemy. It is worth giving them their due: this process is proceeding extremely successfully and the most common “arguments” among the people of Ukraine are the talk that the treasury was stolen by Yanukovych, Putin is wrong, and Russia is the aggressor. To prove the opposite to the ordinary citizen of Ukraine is not possible. In addition, the process of rapid displacement of Russian TV channels from the Ukrainian information space begins.

Thus, the junta took the information space of the country under control and took up intensive brainwashing of citizens of Ukraine.

The course of exacerbation and war

Kiev and the West deliberately chose a course to exacerbate relations with Russia. Thus, the governors of the Russian regions are threatened and demanding their accession to Ukraine, the sites of the Russian media are hacked by “Internet hundreds” hackers.

But most importantly, in the south of the Kherson region, in the immediate vicinity of the Perekopsky isthmus, troops are concentrated, armored vehicles are being assembled and the Ukrainian air defense system is being deployed. It is obvious that the junta’s intentions are not to protect the continent from the “encroachments” of the Crimeans on the neighboring regions, but to restore the “constitutional” order on the territory of the peninsula and disrupt the referendum.

I believe that one of the scenarios for the rescue of Kiev insurgents from bankruptcy can be a war, as for simple maintenance of hysteria in the media, armored vehicles and air defense systems look redundant and extremely costly elements of information warfare.

However, for the use of force, the junta needs confidence that Moscow will not risk fully answering and introducing military units into the territory of Ukraine. I believe that Kiev now has no such confidence, and no one can give guarantees of non-interference of the Russian Federation. However, it is not known who of the “Western partners” that he promised to the Kiev radicals. And because the risk of a punitive operation against the Crimeans is very high, as well as the likelihood that such actions will end with the appearance of polite people in the Lviv region.

It is necessary to abandon the illusions that the collective South-East will be able to give birth to a single regional leader and force local elites to vote for a referendum on federalization. In the conditions of unfolding terror, the protest movement will simply die.

I believe that the decision-making time for the leadership of the Russian Federation with respect to Ukraine is little, and it will be extremely tough to act. However, Vladimir Putin has the right to use the armed forces, no one is afraid of sanctions in Russia, and the level of support of the Russian authorities among the population is extremely high.

And no reference to the norms of international, and even more so Ukrainian national law should not stop Russia: “revolution”, having destroyed Ukraine, nullified all Russian obligations to the international community and the Kiev rebels.

Otherwise, the Ukrainian Wild Field will give birth to such monsters for several years that it will take even more forces and resources to restore order, and the flame of terror and color revolutions will have to be extinguished in the territory of the Union republics.

Ctrl Enter
Noticed oshЫbku Highlight text and press. Ctrl + Enter
We are
A great interview with Sergey Lavrov: about Ukraine, Obama and IranWhat you didn't want to know about England
Military Reviewin Yandex News
Military Reviewin Google News
447 comments
Information
Dear reader, to leave comments on the publication, you must sign in.