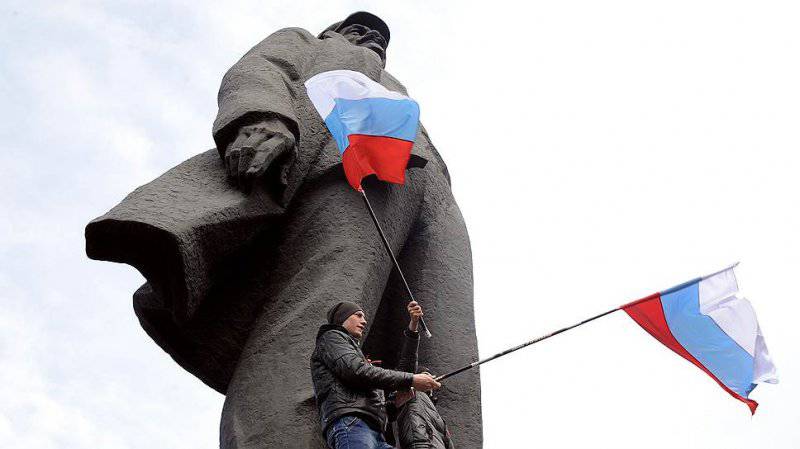 Tuesday, March 11 2014. Five days left before the referendum in the Crimea. The banal expression “tension grows” has long lost its meaning, since there is no place to “grow” stupidly. In the next few hours, BP will decide on the dissolution of the autonomy parliament and the holding of early elections on the peninsula. On the Crimean direction there is a concentration of military equipment. In the Odessa region fraudulently call for military service. They say that it is necessary to arrive at the draft board to clarify personal data. Upon arrival, young people are loaded onto buses and taken away.

In addition, the expected performance of Viktor Yanukovych in Rostov-on-Don. The racially correct media already “buried” him for the second time: “died” from a heart attack at the hospital, according to a “reliable” source from UNIAN. Just a manic desire to "bury" the problem that hinders them.

And last weekend, Yu-V of the country, as always, gave the country "coal". In Lugansk, a few rally of “euromaidan” literally dared and once again captured the regional council, in Donetsk tens of thousands of “Russian tourists” walked along the main street named after Artyom, chanting slogans very offensive to the provisional leadership of Ukraine: “Klitschko - point!”, “Yatsenyuk - shit! Rude, but you can't throw the words out of the song.

There is another crazy day to live. This is becoming commonplace. But I would like to dwell a bit on the topic of the 25 presidential election in May. Just to recall that the early election of the head of state should be, according to the provision of temporary leadership, a consolidating event. There will be a new legitimate president who will lead the country towards a prosperous European civilization. In fact, 25 may not be held in May. This is already possible to speak with full confidence. Let us cite the facts about which the racially correct media diligently hold back.

First, Vitali Klitschko tried to ride with a pre-election tour of the east of Ukraine. In Kharkov, they threw him with relatively fresh eggs and threw two firecrackers onto the walkway, and in Donetsk he had to leave the press conference through the back door. He never met his voters, many of whom wanted intimacy with Vitaly. As for the tour of the Crimea, Klitschko refused, oddly enough, from this exciting idea. I do not want, says provoke. And this is true, since it can really provoke an extremely negative reaction from Crimeans, who are no longer Ukrainian voters. The failed Klitschko electoral raid more than clearly demonstrates the inability of any of the possible candidates to consolidate the electorate. The southeast and the Crimea are already closed for the Ukrainian elections territories.

Secondly, and we have already written about this, the schedule for holding the presidential election has been broken. Open the CEC website and read:

• Before 5 March, stands for presidential candidates must be equipped in crowded places. You know, I am even afraid to imagine what will happen with such stands if they appear in crowded places in Kharkov, Lugansk, Donetsk, Dnepropetrovsk, Kerch and Nikolayev. What national support will be fixed there in brief and capacious expressions;

• Before 5 March, all media are required to provide pricing per unit of print space and a minute of airtime for presidential candidates. Already 11 March, but no rates. And there are no candidates. But they still have time, since the nomination process, according to the schedule, can last until March 30. In the meantime, no one risks to pop out. Except, of course, Vitaly, because he is so stupid that he is confident that the Gauleiter of Ukraine is in his future;

• Not a single political force has sent a notice to the CEC about the venue of the party congress at which the presidential candidate should be nominated. Very significant fact. Recall that in the elections 2010 of the year took part fifteen candidates, all of which were registered in the first two weeks after the start of the campaign.

Thirdly, the Central Election Commission is still either guarded, or captured by unknown masked people, who appear to be either the “Right Sector”, the “self-defense”, or someone else. In addition, the Maidan put forward a condition for BP: the entire composition of the CEC should be replaced by representatives of the public grant organization OPORA. Therefore, we have to state: it is completely incomprehensible who, strictly speaking, will conduct an election campaign. And is it necessary to carry it out at all?

Fourthly, judging by the movement of the army units of Ukraine, it is planned to conduct a military operation in the Crimea. For the time being, the interim command of the Ministry of Defense calls it "planned exercises." However, if hostilities begin, in accordance with the law, it will be necessary to impose a state of emergency. And this means a transfer or cancellation of any election. However, no one pays special attention to such legal trivialities. However, elections in the context of civil war is a complete nonsense.

And, finally, the behavior of the grandmother of Ukrainian politics, who leaned back from the comfortable bunk, is very revealing. She, as we all remember, on the move, right in the wheelchair, which she needs as a hare a stop signal, tried to capture the revolting masses of Galicians. But, as everyone is well aware, she was sent in a very definite, I would even say strategic, direction. The second wave of activity of Tymoshenko was associated with certain negotiations with the EU leadership, which she conducted in the status of a seriously ill patient. That, however, did not prevent her from announcing the course of Ukraine to NATO and declare the denunciation of the Kharkiv agreements. Such peace-loving initiatives of Yulia Vladimirovna were welcomed by the interested parties, as a result of which she was again sent in the direction known to her. For several days in a row, Yulia Vladimirovna shed Vladimir Vladimirovich with a proposal either to talk or to contribute to her performance as part of a team of Ukrainian Paralympians in Sochi, but did not meet with understanding. As a result, she still came down with severe back pain in the clinic “Charite”, where her German friends work. But, oddly enough, the intoxicating air of freedom had an amazing effect on her spinal cord, which, by a strange coincidence, combined with her head. The Germans, bitch, did not find grounds for surgery in the area of ​​the ridge. Although for two years, Yevgenia Tymoshenko assured the agitated European public of the need for an urgent operation: “if mother does not operate, she dies,” “mother’s condition is very serious, and German doctors insist on an urgent operation,” “the bill went literally for days”, “ back pain becomes unbearable, mom dies. " However, the old woman was extremely tenacious. The Germans examined it with a radiometer and found that the level of radiation in the frontal lobes is in the normal range. Moreover, for a week, they promise to put her on her feet. All this medication nonsense needed Julia Vladimirovna in order to take a break. She suddenly realized that the traditional method of “heat in Moscow”, which she practiced with great success for decades, no longer works. Moreover, the temporary "Byutovskoe" leadership of the country, placed in key government positions, is simply unable to do anything. They are "professionals." Speaker-president Oleksandr Turchynov got used to saw election budgets in a comfortable silence, Arseniy Yatsenyuk Tymoshenko doesn’t consider a person as such, and so on. Therefore, the behavior of Yulia Vladimirovna testifies to the fact that she planned to substitute all the elections. This is her style.

Well, while the “number was being put together”, it was reported that Turchinov proposed to the Verkhovna Rada to create a punitive squad in the form of a “national guard”. This paramilitary formation, staffed by the most conscious representatives of the western regions of the country, must carry out punitive functions in the rebellious regions of Ukraine and in the Crimea. The decision to create such a unit indicates the complete inability of the army to carry out its tasks.

Ctrl Enter
Noticed oshЫbku Highlight text and press. Ctrl + Enter
We are
What you didn't want to know about EnglandList of destroyed the largest and most high-tech enterprises
Military Reviewin Yandex News
Military Reviewin Google News
217 comments
Information
Dear reader, to leave comments on the publication, you must sign in.