Putin and Lavrov have proposals for the USA in Ukraine 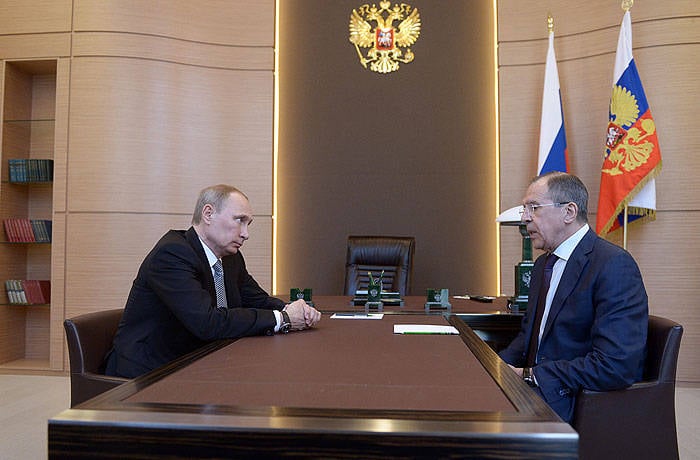 Vladimir Putin and Foreign Minister Sergey Lavrov discussed at the working meeting the response proposals to resolve the situation in Ukraine, which will be sent to the United States, reports "Russia 24". Lavrov noted that the proposals are aimed at bringing the situation into the framework of international law.

Also in the Russian Foreign Ministry expressed the hope that "US diplomats will pay more attention to the really dangerous and unpredictable incidents." In particular, we are talking about the disappearance of several dozen portable air defense systems "Igla".

During the conversation, it became known that the head of the US Department of State, John Kerry, postponed his visit to Russia, which was to be held on March 10. Sergey Lavrov reported on this to Vladimir Putin. Lavrov noted that Kerry was invited first and gave his consent, but then said that he would like to postpone the visit. According to Lavrov, Kerry explained that a new document is being prepared in Washington, which will be submitted to the Foreign Ministry. “Frankly speaking, we have many questions in connection with this document,” said the head of the Russian Foreign Ministry.

The head of the diplomatic department also informed the president that, on his instructions, the Foreign Ministry is consulting on the situation in Ukraine with foreign partners, which lasted the entire past week. After that, the parties expressed their desire for Russia and the United States to meet and once again discuss the Ukrainian issue.

At the meeting, Sergey Lavrov reported to the president on the content of the document on the American vision of the Ukrainian issue. In the document sent by John Kerry, Moscow and Washington disagree on the situation. “Everything was formulated in the spirit of the alleged conflict between Russia and Ukraine and in recognition of the fait accompli,” the head of the Russian Foreign Ministry said. "Our partners suggested starting from this situation created by the coup d'état," Lavrov explained.

The head of Russian diplomacy reported to Vladimir Putin that the European partners had offered Russia and the United States to directly find approaches to resolving the Ukrainian question. “At the next round of bilateral contacts, partners expressed a wish that the Americans and I should directly try to find some approaches that would be acceptable to everyone,” the Russian minister said. He also recalled that at the beginning of March a series of international meetings took place, where the head of the State Department, John Kerry, and the foreign minister of European countries participated.