Why does Brzezinski need a “Finnish version” for Ukraine 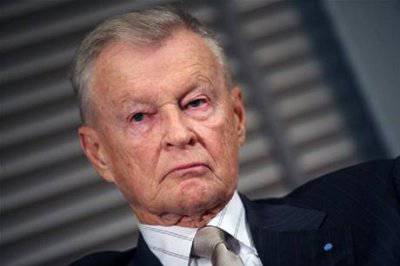 On the day when a coup d'état took place in Kiev, February 22 2014, The Financial Times published an article by Zbigniew Brzezinski, “Russia needs to be offered a“ Finnish version ”for Ukraine” Ukraine). The speech of the veteran of the Cold War on the topic of Ukraine seemed so important to the newspaper that the next day she published the publication in a slightly enlarged version with a modified headline (Russianeedsa 'Finlandoption' for Ukraine)


So, why would the author of the “Game Plan” and the “Big Chessboard” suddenly need Ukraine as a “second Finland”?

Brzezinski, accustomed to handing out recommendations to many US administrations, now advises how to help the new regime in Kiev and keep Russia from decisive steps to protect its vital interests in Ukraine. He recommends that Washington "take such actions that will cost Moscow economic losses," believing that "modern Russia is not economically invulnerable for the consequences" of such actions.

Brzezinski’s long-time idea is that Ukraine is the key to the entire Russian (post-Soviet) geopolitical space. Until now, this key was given into the hands of the Americans, say, not quite. The recent difficulties that the United States has on the “Big Chessboard”, that is, in post-Soviet Eurasia, are attributed to the “big Zbig” with what he calls the “nostalgic dream of Vladimir Putin about the Eurasian Union”. Ukraine is therefore so important for the luminary of American geopolitics, that "Ukraine’s defense of its national rights is already strengthening the post-Soviet republics of Central Asia, in particular Kazakhstan and Uzbekistan, in recognizing the need to show more rigidity in resisting Moscow’s continuing efforts to deprive them of their independence.”

Brzezinski's Fix Idea - Further fragmentation political map in the center of Eurasia (a prototype of this is the continued division of the post-Yugoslav space). Therefore, Brzezinski collapses with such force on attempts to integrate the post-Soviet space. All the hopes of an elderly master of geopolitical intrigue and Russia's inveterate hater are connected with the fact that the salvation of the “new Ukrainian democracy” (as he calls the regime established in Kiev after the coup) will indicate to Russia its future. Otherwise, Brzezinski intimidates, Russia threatens to “isolate itself and become a semi-stagnant imperialist relic.”

The February article by Brzezinski in The Financial Times clearly described the central task of those who listen to the political recommendations of the Polish-American strategist and should follow them, namely: at any price, even at the cost of a lot of blood, which the Yarosh-Turchinov-Yatsenyuk regime promises to the people of Ukraine rapprochement of this country with the post-Soviet states, united in the Customs Union and moving towards the creation on a contractual basis of the Eurasian Economic Union ...

As Brzezinski writes, “The United States could and should make it clear to Mr Putin that they are ready to use their influence in order for a truly independent and territorially indivisible Ukraine to pursue a policy towards Russia that is effectively being carried out by Finland.” The essence of the “Finnish choice for Ukraine,” according to Brzezinski, should be not to force Ukraine’s entry into NATO at the moment, but to seek for it “an ever-greater relationship with Europe.”

But why all the same Finland? It is easy to see that the non-aligned status of Finland is increasingly undergoing erosion as the Finnish armed forces are involved in the NATO program "Partnership for Peace and the development of other forms of military cooperation with the North Atlantic Alliance." But this is only one side of the issue. There is another one related to the use of Finland as a base of subversive activities in the territory of neighboring Russia.

In particular, we are talking about the Islamist terrorist group “Imarat Kavkaz”, which has found a safe haven from the Finns, into which it moved its Internet resource “Kavkaz-Center”. On the territory of Finland, under the guise of “scientific conferences”, seminars and trainings, the ideological treatment and training of the “democratic war” of citizens of the Russian Federation and other post-Soviet states involved in it is being carried out on the side of it. In Helsinki, they not only reconcile with this state of affairs, but also support the activities of Kavkaz Center, motivating their position with the fact that state borders should not be an obstacle to the “defense of democratic values”.

Something similar is destined for Ukraine, but not in the soft "Finnish", but in the hard "Slavic" version.

The head of the Council for National Security and Defense of Ukraine put by the “commandant of the Maidan” Andrei Paruby was put by the coup. His deputy was the leader of the neo-Nazi attack aircraft "Right Sector" Dmitry Yarosh.

Andrei Parubiy, in 1991, was, along with Oleg Tyagnibok, a co-founder of the radical nationalist party Freedom. Since 1996, Paruby has been the leader of the paramilitary youth nationalist organization Patriot of Ukraine, which in turn is part of the Right Sector association, the striking force of a perfect coup d'état.

Dmitry Yarosh is a “professional revolutionary” (they claim that he has never worked anywhere). In 1994, he became one of the leaders of the organization “Trident” named after Stepan Bandera, created under the patronage of the Ukrainian émigré organization “Brotherhood of OUN-UPA soldiers”. Since 2005, the leader of the Trident. For a long time he collaborated with the newly appointed head of the Security Service of Ukraine Valentin Nalyvaichenko, as well as with American and Canadian specialists in the "partisan war" among Ukrainian immigrants. An ardent supporter of the thesis that the war of Ukraine against Russia and the liberation of “Ukrainian territories” occupied by the “Russian Empire”, including the Kuban and the Far East, are inevitable.

Under these conditions, the proposed Finlandization of Ukraine by Brzezinski would not mean friendship and good neighborliness, but the transformation of Ukrainian territory into an outpost of subversive activity against Russia and its allies.