A piece of alien war 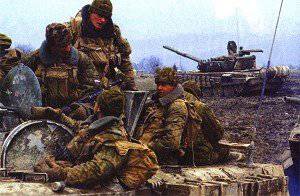 January two thousand. A few weeks after the New Year. Slushy field in the suburbs of Grozny. I sit on the armor, leaning back to the tower. The walkie-talkie is leaning against the trunk of a KPVT, an automaton is on its knees, an earpiece is on its ear. Near the hatch sticks out drove. It smokes.


So a few hours pass. The battalion commander went to the tent to the regiment commander and has not yet appeared. We do not wait for him, do not miss, do not think about anything. We do not "at all ..." For all for a long time already do not care. Just sit. Just at war. I'm not even cold anymore.

The low overcast sky, incessant rain that had already lifted everyone, the eternal water in dugouts, cold, fog and slush, slush, slush ...
People live in this slush. Several hundred people came here for several hundred kilometers, dug holes in the ground and have been crawling in this clay for several weeks. I look at them from above. Leg hangs from armor.

People are mainly engaged in what they are looking for warmth.

Rumbles a hole. Bonfires are burning under the tracks of beh. Smoke layered on the field. Almost all people are sitting around the lights and plait boxes. Nobody moves, excess movement is excess heat, and it is not enough. Apathy.

The most sophisticated hammocks found and hung them under the broad noses of the BMP. Are sleeping.

The dirty clay-stained technique stands crookedly on the very roofs of the equipment on the ground rolled into a half-meter-high ruts.

A spinner flies and sits. This seems to be the only movement in the world. The pinwheel is also smeared with clay on the very blade.

A kilometer or two can see the houses of the city. Through binoculars you can distinguish several women from one of the entrances. They stand there for a long time, almost without moving. Whether they are talking or not, there is no discernment from here. On one, younger, homemade galoshes of trimmed boots. An old woman in a black scarf.
More than one person. Only black holes of windows and holes in brick walls. Traces of fires and shelling.

In this city, the enemies. They are not visible, they do not shoot, but they are there. They need to knock out and take the city.

Behind the back work "saushki."

If I were asked what most accurately reflects this sad winter slush of the second Chechen one, I would answer - “saushki”. “Second Chechnya” is “saushki”. They are heard always and everywhere, at any point of this war.

Like herds of elephants, they stand in every field and sigh every two to three minutes. A rumble on the ground, an echo in the mountains, then a short lull with the rattle of a hole and foggy cotton in ears and brains, and again a sigh of metal herd, like a metronome, counting the war. A never-ending, scary, methodical and unstoppable metronome. Knocks and knocks - day and night, day and night, for several months now. Every two to three minutes. This is the purpose of the herd's existence - to come to this field, to become and begin to sigh every two minutes. Stand here for several days, withdraw and move to another exactly the same field and start groaning in the same way there, not seeing the results of your sighing. The shot is an end in itself. It does not lead to immediate death. Not a single gunner can tell how many people he killed. No one, passing by a shattered village, can say: "It was me who had ravaged this house."

Near each “saushki” there is a heap of all good lying right in the clay. Stacks of shell boxes, shot brass sleeves, spare parts, empty drawers, whitening on the open insides of boards, clods of oiled paper, headsets. In the midst of this junk, soldiers fiddle around, haul boxes of shells and feed them to the dead elephants, pushing yellow double-banana bananas into the feed.

Most of the gunners are like drove next to a truck stuck in a rut. Only instead of brushwood drag shells. Their faces express nothing. They don't care about anything either. They pull boxes to elephants sigh.

This is how people are killed. As a matter of fact, these dirty soldiers in clay jackets with pounds of mud on kirzacs are now engaged in murder.
I'm sitting on armor. I look at them. We, the technical department, have a certain amount of envy for the gunners - wherever they come, they always have a house. Do not dig holes in the ground and then sleep in puddles - in the tower is always dry. The main thing is to make sure that no one gets hit. And then, like this, after a night march, one kid fell asleep on the breech - if you are a meter with a cap, it is very comfortable to sleep on the breech - and then they declared shooting. At night, the tower is dark, the lighting either didn’t work, or didn’t light it, the gun was already loaded. "Fire, shot." The force of recoil in a howitzer several tons. The guy, they say, rolled it into the sputum. 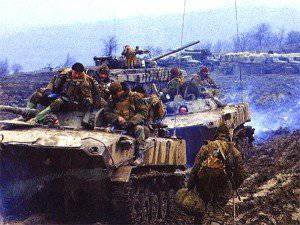 The pinwheel rises and flies away. When it is frozen, its engines work muffled, it seems that the air wave from the screws is softer.

Five people appear from the bushes at the foot of the hill. They are not dressed like other people in this field. They do not have pea-jackets, light jackets tucked into pants, rubber boots rolled up. They differ from the rest, as experienced walkers differ from beginners - everything on them is intended for comfortable and easy movement through the mud. There is nothing superfluous.

This is intelligence. Returning from Grozny.

Five carry on a sixth stretcher. Immediately it is clear that he was killed.

Everyone watches them climb the slope. They, rising and breathing with their mouth, look at us. As we sit and watch.

When the five come to the top of the summit, where the medical “pill” and the tent of the medical platoon stand, they lower the stretcher to the ground.
Two sit side by side, choosing the least rolled areas. One spreads under a logger. It is evident that they are very tired.

The rest go higher to the headquarters tents.

Having reached the people around the first fire, the group commander throws away on the move, although nobody asks him about anything:
“The Czechs are there in the city,” he points at the houses. - We have one two hundredth.

He has big eyes. Or maybe it only seems to be because he is looking upwards.

Two orderlies appear. Approach a stretcher, squat. One takes out a large notebook in ninety-six sheets, opens it, pulls out a pen. In the notebook table, you can understand that this is a list of losses, most likely, the number, division, name, date, cause of death.

The second orderly pulls off the killed jacket from the shoulder, then the sweater bares the arm. A small pool of thick blood had already formed in the hole under the collarbone. The orderly examines the inlet and says something to the first one. That records.

Then the second pulls the jacket and sweater back, takes the dead man by the wounded arm and turns it over. Picks up a jacket and a sweater on a back. In place of the left shoulder blade, there is a huge hole in two fists, pink blood and white blood clots fall out of it, flops on a stretcher, like jelly, in a large puddle - in a stretcher two liters already.

If the blood flowed in such clots, it means that the artery is killed. Such bleeding is very difficult to stop.
I think I smell it - the smell of fresh meat, freshness.

The guy doesn’t have a shoulder blade. Fragmented bones are visible, something else is yellow, the ribs seem to be.

Svd. Sniper. Shot the floor from the second or third.

The second orderly says something again. The first one looks at the torn shoulder and writes.

The hand for which the medic is holding the dead man is unnaturally delayed, it seems to come off. The hand is big, muscular. The back too. It is evident that the guy was powerful, very strong physically.

He is put back on his back, again pulling the sweater, jacket.

Backing up to the stretcher, the medical “pill” creeps up slowly. She rolls on the track left and right, but she cannot get out of the rut.
Drove jumps out of the cab and goes to open the rear doors. Having opened, it remains to stand next to the car, looks at the victim and at the orderlies. 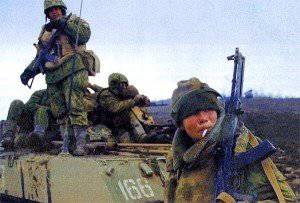 The two remaining scouts still sit side by side, do not take any part in the action, do not look at anyone.

The first orderly, with a book, takes the soldier of the deceased from the scouts and leaves. The second bandages begin to tie the dead jaw. Then he folds his arms over his chest and bandages them.

Just a minute ago, he looked unsightly, but - as alive.

Now that the bandage on his head is tied with a bow, he does not look either stupid or funny. He is killed.

Drizzle In the dirt lies a dead man. His cheek is smeared with clay. For some reason, the orderly did not close his eyes, they remained open.

The orderly and the carrier took up a stretcher and loaded the killed into a “pill”. Scouts escort brother. Drove locks the door and goes after the orderly into the tent. The car is not going anywhere. Probably, they will wait for the next one killed or wounded - this guy doesn't care anymore when he is taken to the hospital. Most likely, he will lie so locked up in the car all night, and if there are no killed or wounded by the middle of the day, he will be taken alone.

One of the scouts has already cooled down, steam ceases to flow from it. He starts to shiver.

Appears battalion. Drove into the hatch. The combatant climbs on the armor, puts one foot into the commander's hatch.
“Let's go,” he says.

I pull up my leg, press the walkie-talkie.

Betaer turns around and leaves on a track, rocking like a boat. A piece of someone else's war with a dead intelligence officer in the car is left behind.
Once again, shooting "saushki." Artillerymen sailing past were frozen over the slug drawers, looking after us. I look at them.

I have never before recalled this piece of someone else's war. Never again was in this regiment. I don't even know what the regiment is. I do not know what it was for the field.