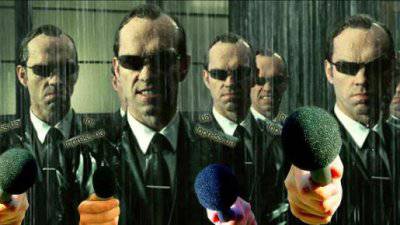 What prevents globalization, read - the destruction of states, culture and the dissolution of indigenous peoples in a multi-ethnic society? First of all, the realization of what is actually happening. To prevent this, people's minds must be controlled so that black can be called white. Who is involved in raising a person and instilling in him so-called "values"? Now, this is the agent of the “world elite” - the so-called “fifth column” within the states, which, being ideologically processed or simply for money, defends the interests of the “crazy globalizers”.


In any case, these people work against the countries in which they are located. Their way of thinking, lifestyle, behavior should become an example for others, because, in this way, people will consciously or unknowingly imitate them. In a given format, this can be done by endowing such people with material well-being and calling them "successful." That is easily done by those who print money and “throw it in” wherever it wants in unlimited quantities.

The agents in the states "shine" and call themselves "elite", which undoubtedly arouses respect from many, especially the younger generation, pre-configured to achieve material success, regardless of the means and format of society, even if it is frankly cannibalistic.

Therefore, the “fifth column” is not just located in the country, it is legalized and causes “respect”. “Successful” journalists and businessmen, under the hour, simply have a blank check from “looking at the places” for “persistence of degradation.” Signals in the "center" regarding the disloyalty of an entrepreneur, receive a response on the ground in the form of legislative prosecution, which is now possible to do with anyone, because the tax system, etc., is specially created so that no one could survive without breaking the law.

The main sector of the “fifth column” is the ideological upbringing of society, it passes through the media, it also includes literature, works of art, cinema and so on. The project is not momentary, it is designed to change the perception of reality and the logic of thinking, therefore, passes unnoticed, as if by itself in the process of evolution. We can observe its fruits in the constant delegation of degenerative innovations in the theater, painting, cinema and variety art. Perversions, primitivism and debauchery are served as great achievements and advertised with the help of artificially appointed prices for "masterpieces", such as paintings - daubing for millions of dollars, as well as the salaries of directors, actors, actors, humorists, etc., who consciously or especially for money participates in decadence.

As a result, we have trained in “correct education” cadres in politics, the media and culture. Having a distorted perception of reality, with imposed ideological nonsense, the same media employees easily serve the destructive forces inside the state. Their consciences are atrophied, they are brought up with examples of “success”, their consciousness is distorted, which allows them to think about their “great mission”. Although, in reality, their mission is the unconscious service of a crazy “world elite” leading civilization to global suicide. They do not have such thoughts, because there is no such thing in orders and manuals, it is not supposed to think in this direction. In addition, the constant presentation not of what comes out of the soul, but for money or under the influence of delusional ideology, causes an inevitable degradation of professionals, the achievement of which remains a beautiful form of presentation and completely worthless ability to analyze, because the connection with the truth is cut off - they are transformed into zombies that can only think in that direction.

Against the background of all of the above, it is impossible to imagine that the revolution that the people are doing on the Maidan is not to a large extent initiated and controlled by the “fifth column”. And if so, then again lies, the substitution of concepts, manipulation, etc. As a result, we see that appeals for freedom and independence lead rightly rebels to enslavement in the EU, where the country must perish with its culture and economy, and the indigenous people dissolve into so-called multiculturalism. Does the person want it in good condition if he is explained to him? Of course not, that is why he is shown the very opposite from morning to evening, calling the EU salvation and the height of the development of civilization.

Globalizers need to get another piece to digest and fulfill their great, as they think, mission to reduce the population and take it under total control. These "spiritual freaks" and degenerates can not realize that they are leading civilization into the abyss and their future kingdom among a safe number of slaves, this is the myth that they are fed to participate in the destruction of the world's population. It is impossible to explain to them, because their degree of processing and zombies is several orders of magnitude higher than that of ordinary people, because their mission is much more important - they go to the precipice in front of the column and persuade the rest.

That is why, when another piece called Ukraine balked at being swallowed up, forced mechanisms began to operate under the guise of a “people's liberation movement.” It did not arise against corruption and lawlessness in the country before, it did not arise when tariffs were raised and salaries were lowered, production was destroyed, no, it was all in line with the doctrine of “global suicide”, but when Ukraine did not want to be swallowed up when it violated its plans for the destruction of independent states, it was at this moment that the Maidan appeared for “justice and independence”.

The “fifth column” will try out new methods of obsession, which are becoming more and more frank, because the “threshold of sensitivity” of the people to deception, in connection with the general degradation, is constantly growing. It is already enough for him to shout out a couple of code words acting on consciousness, in order to use and manipulate him in a greater degree by fair impulses. What ultimately leads to the achievement of goals that have nothing to do with the well-being of the country and people.

Thus, all new technologies of management are used, in which the whole scientific departments of the “zombie servants” are engaged. If they are pulled out of the system, sent to an isolated island, disconnected from them the "chief" and the constant "preaching" of mentors - warlocks, then soon their consciousness will clear up, and they will be terrified by the realities that are happening around and the role that they have been assigned, of course, provided that they are no longer spiritual invalids who have passed the “point of no return”. But no one will allow them such luxury, therefore the system will dominate the minds everywhere, with its inflated authority and respect for those spiritual degenerates and degenerates who keep civilization in the direction of the abyss.

How to wake up this zombie army - the "fifth column"? She is trying very hard for us all to disappear, but she does not understand, because of her “spiritual circumcision,” that she is leading this process.

It is time for people to understand what is really happening and tear down “fans of global suicide.”

Ctrl Enter
Noticed oshЫbku Highlight text and press. Ctrl + Enter
We are
What you didn't want to know about EnglandSaratov club "Patriot": not to be afraid of the enemy and love the Motherland
Military Reviewin Yandex News
Military Reviewin Google News
25 comments
Information
Dear reader, to leave comments on the publication, you must sign in.