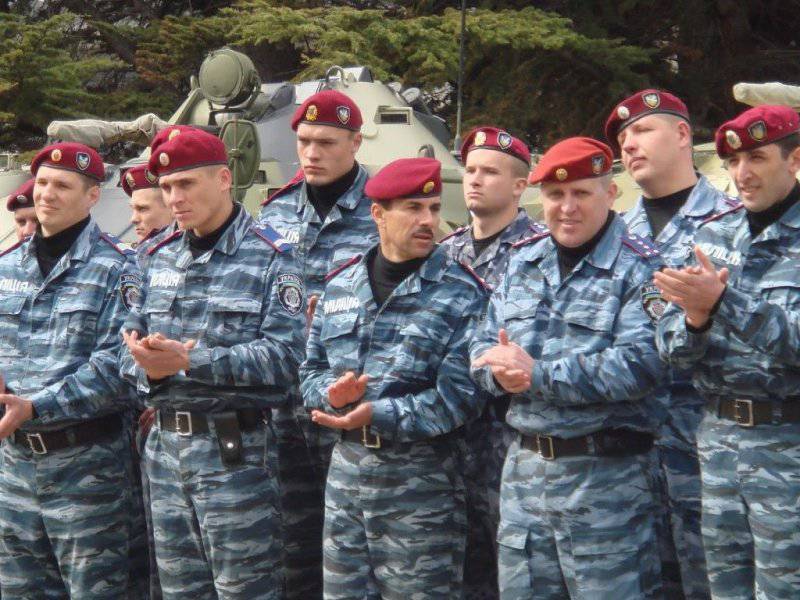 The three-month battle on the streets of Kiev of the Berkut employees, with hands bound by order, with the Bandera militants of the Right Sector, well-armed and trained, made a huge impression on Ukraine and Russia, and the whole world, who could see an objective picture of events.

Berkutovtsy did not fully understand who they were dealing with, that they were a real enemy, thanks to the propaganda of the Western and pro-Western media, which were friendly to Bandera fascists. This truth was carefully concealed then, and they are trying to continue to conceal today, but it will break through to the world: in the 21st century of the global Internet, it is difficult to completely silence and defame the truth.

About the battle of "Berkut" with Bandera's "Right Sector" will still write volumes of research, but it is already clear that it is of great importance. Thanks to the "Berkut" in all its glory, the lies of the Western press, cynical, vile, shameless, suddenly lost its memory today, which yesterday called the fascist militants "peaceful protesters." "Golden Eagle" tore the mask from this old liar!

Thanks to the courage of the "Berkut" we clearly saw the second face of the two-faced Washington, which was hidden behind the "double standards", and it turned out to be a fascist face harassing Bandera on Russia. So once the Nazis inflicted on the USSR.

Washington sank to what it produced in Ukraine - in a European country! - The coup d'état of the Latin American model, the brown “color revolution”. He has a great experience of such revolutions: with the active participation of Western instructors "on the protest movement" and snipers. As always in such cases, led by the US Embassy. The puppet Kiev government, run by the American embassy, ​​is now presented to the world as a new Ukrainian government! What a "democratic" meanness!

Washington today insists on Russia's recognition of this pro-fascist Bandera government. What a shame for our former allies in the anti-Hitler coalition! It seems that they still do not understand what kind of puddle they are getting through the fault of US Vice President J. Biden and his adviser Nuland. Well, that's their choice! Former US Secretary of Defense Robert Gates was right in his description of the architects of American foreign policy: "hypocritical, stupid, nasty and stupid."

One berkutovets before the attack Bandera told us the truth about what is happening: "Moscow is behind us!" And we all saw, thanks to him, this truth: that there is nowhere for Russia to retreat in Ukraine! It is a matter of honor today to save everyone who made us aware of this terrible truth, to save everyone who is still alive in Ukraine from the total Western propaganda lies about the “Golden Eagle”.

Bandera Galicia is posing itself today for the whole of Ukraine - this next lie will soon prove itself in all its gangster glory - it is already showing up! - and Ukraine, and honest people in the West otrezruyut - already sober! And Ukraine will act on the same side of the barricades together with Russia, and with Galicia ... let the European Union understand. And we will see whether he will be tolerant to Banderovites, as he demands from us.

The tragedy of the "Berkut" was not in vain. With his courage, loyalty to the oath, he awakened many from hibernation both in Ukraine and in Russia. And he highlighted our “fifth column”: we saw her fake tears about “peaceful protesters”, and cowardice before the shouting of Washington officials, her justification of villainy, if it is western, and, ultimately, treachery.

Our "human rights activists" managed not to even see the fascists, and they believe, to the word, Bandera figures and their "press" ... It turned out that "liberal fascism" does exist, these are not empty words, as it seemed to many yesterday ... the government of Kiev liberals!

After contact with the new Bandera fascism, Russia will be different. We already have a new ideology, the need for which has been said so much - anti-fascist ideology on the material of the XXI century! This is a great achievement: the crisis in Ukraine gives us, paradoxically! - hope for the future!

From the Ukrainian crisis, a new Ukraine and a new Russia will be born. There is no good without good: Bandera quickly beat Euro-Storm from the "Euro-Ukrainians".

Ctrl Enter
Noticed oshЫbku Highlight text and press. Ctrl + Enter
We are
Results of the week. “Ta-ak. Hence, we know the Russian language. Why was it necessary to hide? ”Costume show in Kiev, or the non-statutory "Golden Eagle" ...
Military Reviewin Yandex News
Military Reviewin Google News
35 comments
Information
Dear reader, to leave comments on the publication, you must sign in.