March 11 2014
53
It is extremely interesting to observe how the reaction is shown by representatives of foreign political elites, as well as the world media on the situation in Ukraine. In this case, of particular interest here is not just the reaction itself, but also its dynamics, to which particular attention should be paid.


So, immediately after the Federation Council enabled Russian President Vladimir Putin to use the Russian Armed Forces on the territory of Ukraine in connection with the events taking place there, the so-called world community fell into real hysterics. Newspapers and magazines were overwhelmed with headlines that there was - the aggressive behavior of Russia, the desire to suppress the peaceful democratic process, to trample the desire of the Ukrainian people to live by European canons. More than others, overseas political elites and the media practiced in anti-Russian rhetoric. American and Canadian readers, viewers, users in their comments in the materials in the media were indignant about the "bloodthirsty Putin."

However, as the famous proverb says, everything flows, everything changes. And more and more often in Western circles, the reaction to what is happening in Ukraine and to the statements of the Russian authorities about the Ukrainian vicissitudes is much more restrained. No - cries and cries about “Russia - the aggressor” have not disappeared anywhere, but a) they are significantly less, b) many publications have started to put these words in quotes.

The German world-class publication "Der Spiegel" after numerous publications that Russia violates the sovereignty of Ukraine, unexpectedly for many came out with the title:

The crisis in the Crimea: the nationalists incite the Crimean Tatars to terrorism.

At the same time, in a number of other German editions, articles appeared in which the authors recall the agreement between Ukraine and Russia that the Ukrainian territory can hold up to 25 thousand Russian military at a time, and now this number is no more than 15 thousand.

It would seem that the material does not look sensational, but for us it is for Russia. For the overwhelming majority of Europeans, the treaty on the military presence of Russia in Ukraine is more than a full-blown sensation. Indeed, the aforementioned majority of citizens of the European Union countries for understandable reasons about the existence of such agreements between Kiev and Moscow, as they say, have never heard of, and therefore were an excellent object for information manipulations in the format “Russian troops invaded the Crimea”, “suffocation of Ukrainian democracy” and In the same vein ... Thanks to "Der Spiegel", "Frankfurter Allgemeine Zeitung", "KlagemauerTV" and other German (and not only German) media Europe and the world against the background of seemingly hopeless anti-Russian propaganda are beginning to see completely different r Ani current situation around Ukraine.

To understand that the rhetoric of the West is beginning to experience an important transformation, it is worth looking at the pages of the American edition of The New York Times. 8 March of this year on the pages of this publication comes out an article by Peter Baker, in which the author discusses the situation around the Crimea (the text of the article - here). Baker issues an article that, at the very least, ricochets through the US authorities. The author says that Russia actually reserved the right to respond to a situation in which the United States supported the idea of ​​separating Kosovo from Serbia. 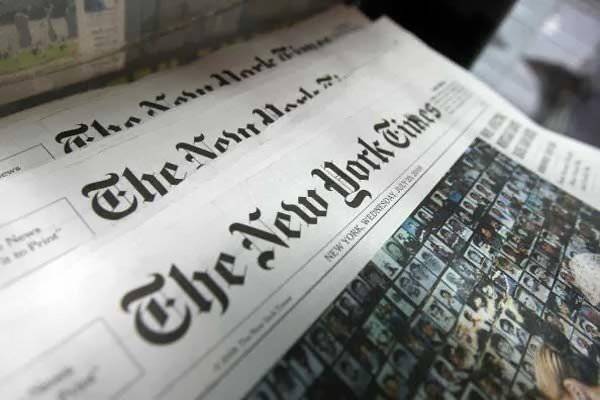 From the article:
The secession of Kosovo from Serbia drove a wedge between the United States and Russia, which led to a deterioration in relations for years. Washington supported Kosovo’s desire for independence, while Moscow saw in it a violation of Serbia’s sovereignty.

Now, years later, the former Cold War opponents are once again in conflict. This time, Russia loudly proclaims the right of Crimea to secede from Ukraine, while the United States calls the process illegitimate.

At the same time, the author without foaming at the mouth (and foaming at the mouth of events in Ukraine has become commonplace for many overseas authors) suggests that the topic of independence of certain territories, the topic of their transition from one jurisdiction to another is so delicate that consensus and the recipe can not be. Peter Baker mentions upcoming referendums in different parts of the world: it is not only Crimea, but also Scotland, Catalonia, declaring that once the States themselves unilaterally declared independence from Great Britain - they say, “central authorities” no one asked. And if, more than a couple of centuries ago, the young American state was based solely on the opinion of London - what would be its fate? It is unlikely that an independent States would be discussed ...

If, before reading the article of Baker, it is not clear that it was laid out exactly on the pages of the NYT, one would think that one of the Russian publications with a moderate position is writing. But this is an American edition! And this edition, as many people know, can hardly be suspected of a great love for taking into account anyone's interests, except for those directly American. It turns out that this time about the information blockade of Russia, the blockade of its position in Ukraine, the blockade of its interests in the Crimea and in the east of Ukraine is out of the question. Even if those media outlets that have always been distinguished by the anti-Russian stance when looking at geopolitics, publish very restrained and reasoned materials, then is this not a precedent ...
Французская "Le Figaro" comes out with a series of materials in which the "invasion" of Russia in the Crimea appears to readers in quotation marks. Just quotes - and how seriously this changes the essence of the material for people who are accustomed to using Le Figaro as a source of information about world events. In addition, the publication demonstrates frank joy over the fact that, with all Holland's talks about sanctions against Russia, a supply agreement for the Russian fleet "Mistral" both countries did not tear. At the same time, Le Figaro writes that the European Union, unlike the United States and NATO, is not going to impose sanctions against the Russian Federation in terms of limiting military cooperation, and immediately adds:

The intervention (but not the invasion - author's note) of Moscow in the situation on the Crimea peninsula somewhat cooled the hopes of France, but not enough to suspend the execution of contracts.
And then, as if to justify their position before the gentlemen of the North Atlantic Alliance:

ships to Russia will be delivered without weapons ...

Nobody wants to lose the Russian market - the publication of “Figaro” - as one of the examples.

Interesting is the position and a number of European and American ex-politicians. It was the ex-politicians (if the politician can even be the former), as many of those who are now in power, apparently, are forced to maintain a clear line of restraint in Russia. But the former politicians can afford to express their personal, unbiased opinion, based on objective information.

Ex-President of the Czech Republic Vaclav Klaus said recently that the situation in Ukraine in the form of an acute political crisis was provoked by the United States of America and the European Union. At the same time, Klaus noted that many episodes of the script in many respects remind him of what the West realized in his time in Yugoslavia.

Vaclav Klaus in Brno:
The people of Ukraine do not deserve to play with his country like that. All this reminds me of Yugoslavia 20-year-old. I am afraid that Western Europe and the United States have put their hands on this, supporting the demonstrations that were in Ukraine.

Frankly, he does not understand why the United States sharply criticizes the position of Russia in Ukraine (in the Crimea) and the current policies of the West. One of them - a member of the US House of Representatives Ron Paul (by the way, he also has his own prefix "ex" - he is an ex-candidate for the role of presidential candidate from the Republicans from the Republicans).
Words Ron Paul quotes RT:

Is it something we read a notation on the violation of sovereignty? But what about the sovereignty of Iraq, Afghanistan, Yemen, North Africa? We are constantly getting into other people's affairs - our UAVs fly in Pakistan, our military bases are located in 130 countries around the world.

I do not like hypocrisy. We preach one thing and at the same time, for some reason, we misty all the water behind our backs.

In this regard, it can be argued that the West to suppress Russia in terms of information every year becomes more difficult for the simple reason that in Western countries there are people who understand that the confrontation with Russia is only due to the fact that the United States wants to strengthen unipolar world, bite into his teeth, at least, non-constructive.

Ctrl Enter
Noticed oshЫbku Highlight text and press. Ctrl + Enter
We are
Situational analysis of the death of the MH17 flight (Malaysian Boeing 777), made on the basis of engineering analysis from 15.08.2014Geopolitical mosaic: the Stop Censorship movement advocates censorship, Naryshkin explained that Russia supports the territorial integrity of Ukraine, and the world community disgraces before the UN
Military Reviewin Yandex News
Military Reviewin Google News
53 comments
Information
Dear reader, to leave comments on the publication, you must sign in.