9 March 1714. Peter I issued a decree prohibiting the assignment of officer ranks to nobles who did not serve as privates. 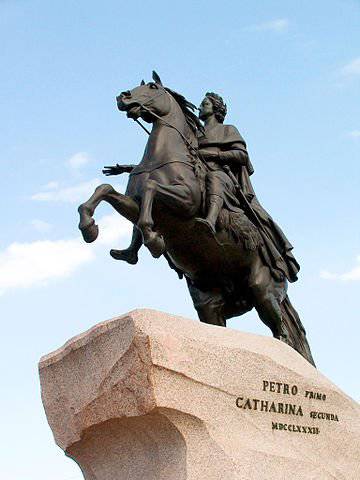 9 March 1714. Tsar Peter I Alekseevich issued a decree that prohibited the nobles who did not serve as privates from serving as officers. In 1720, Peter I issued a decree that instructed ober officers who are not from noblemen to issue patents for noble dignity and consider their children and all their offspring to be nobles.


Thus, Petr Alekseevich solved two important problems at once. First, the nobility retained its function of the military class, which was to devote a significant part of its life to military service. At the same time, Peter solved the important task of educating the morale of the officer corps. All future officers had to begin service with ordinary soldiers, this gave them a great military experience and understanding of military service. It was a blow to the notion that noblemen should immediately occupy senior positions simply because of their origin.

Secondly, Peter kept the possibility of renewing the nobility, the influx of "fresh blood." The noble rank retained its high status, but the achievement of a noble rank by service was open. Personally, the king appointed high commanders and dignitaries, as nobles born in this rank, and acquired his service. Suffice it to recall the talented cavalry commander, associate and favorite Peter I, field marshal general, the first governor-general of St. Petersburg, Alexander Danilovich Menshikov. He was successively Peter’s batman, scorer, sergeant and lieutenant.

Peter can be treated differently. Man he was versatile. I broke a lot of wood, made mistakes. Suffice it to recall the Most Sustained, Most Intense, and Extravagant Cathedral that he created. But his attitude towards military service causes respect. Peter Alekseevich from a young age studied military art, began his service as a drummer in the Preobrazhensky regiment, a simple soldier. Carefully mastered the service scorer (gunner). At the same time, Peter diligently studied naval affairs, military construction. Only after the capture of Azov did the king put on the uniform of an infantry officer (captain). A non-commissioned officer of the Guard became in 1700 year. At the same time, the king did not disdain any work, was both a carpenter and a blacksmith, well mastered several crafts. By this he set an example to the whole nobility. Having met young nobles who had returned from training in Western Europe once, the sovereign told them: “I am your king, but I have corns on my hands. And all in order to set an example for you, and at least in old age make you worthy assistants and faithful servants of the Fatherland. ”

For the king, the main thing was not the origin of man, but his personal qualities, skill, determination and courage. For good service, ordinary soldiers were encouraged, for courage and skill could be made to officers. The sovereign put high military service. “The military charter” asks the question: “What is a soldier?” And answers it as follows: “The name of the soldier contains all the people who are in the army. From the highest general, even to the last musketeer, equestrian, or on foot. " The composition of the regimental vessels were to include not only headquarters, ober- and non-commissioned officers, but soldiers. Both officers and soldiers had the right to a free and decisive vote. Peter forbade officers to take privates into the service, except for batmen. However, the orderlies could be taken in limited quantities, and they were not considered servile servants. They could not be treated cruelly. The officer in charge of the officers carried out various functions — he was the entrusted officer, the officer, the guard, took care of the officer's life, baggage, etc. Usually they were taken from the less capable lower ranks.

The Peter system, aimed at the formation of a warrior class, from his early years familiar with military service and knowing all the subtleties of military affairs, led to brilliant results. Already under Peter Alekseevich, the Russian army surpassed in the art of war one of the most advanced armies in Western Europe - the Swedish. The Russian armed forces surpassed the Swedish forces in all directions: they defeated them in a series of battles, including the general battle, the Poltava battle, took their most important fortresses in the Baltic States, and learned how to beat the sea. Later, the army created by Peter brilliantly crushed the Persians, the Crimean-Turkish hordes, the Prussians and the French.

During the Seven Years' War at the Battle of Zorndorf, the Russian army was stopped by the fearsome Prussian troops of Frederick the Great. The Russian infantry in this battle showed amazing stamina. Participant of this battle, A.T. Bolotov, described one of the stages of this battle in this way: “In groups, in small groups, after shooting their last bullets, they remained firm as a rock. Many, pierced through and through, continued to stand and fight ... ”. And the Prussian king Frederick, summing up the battle, said that Russian soldiers "... can be killed rather than won." The Prussians simply refused to go on the attack, having tried Russian bayonets. In the Battle of Kunersdorf, the Russians completely crushed the Prussian army, which was then considered the best in Europe. Then the Russian troops took Berlin and Königsberg, the most important centers of Prussia. Only the betrayal of the national interests of Russia by Petersburg did not make Königsberg Russian in the XVIII century.

The Russian troops under the command of Rumyantsev and Suvorov simply swept away the Crimean-Turkish hordes from their path. Brilliant victories in Larga and Kagul, the assaults of Ochakov, Ishmael and Anapa forever entered the Russian military chronicle. The Russian fleet under the command of Ushakov made the Black Sea the “Russian lake”. The Italian and Swiss campaigns of Suvorov showed Europe that the Russian soldiers were able to beat the new “star” of the European arena - the French army. In the future, the Russian army will be able to withstand the blow of Napoleon’s “Great Army” —in fact, this will be the “all-European army”, which will be commanded by a cohort of the best French and European commanders. However, almost all of this army will be buried in the open spaces of Russia. Russian warriors will stand adamantly in the battle of Borodino, the European hordes will chase and liberate Berlin, and then Paris. Russian warriors will annex the North and South Caucasus to Russia, defeating the Ottomans, Persians, and Highlanders.

Tsar Peter destroyed the remnants of parochialism. So called the order of distribution of official places, taking into account the origin and official position of ancestors of a nobleman (boyar). Ivan the Terrible fought against this misfortune. A nobleman under Peter Alekseevich, if he did not serve the sovereign's service - 7 years in military service or 10 years in civilian life, until his old age was considered “underage”, that is, a nobleman who did not enter public service. Those nobles who dodged military parades were deprived of estates. As a result, restored the original essence of the existence of the nobility. Nobles were supposed to protect the Fatherland, shed blood, give their best years of service. For this they received the right to the estate. Under Peter, the service of a hereditary nobleman could, to old age, be held as part of privates and non-commissioned officers. This was especially true of the illiterate nobles and landless nobles, single-palaces.

For long historical era it was a fair system. Russia-Russia fought its entire history. There were almost no peaceful years. The entire population, estates and social groups carried "service". The meaning of the existence of the nobles was the defense of the Fatherland. They were soldiers of Russia, and the tsar was their general, supreme commander.

If a nobleman stopped his service for any reason, the estate was seized. The widow of the deceased warrior had the right to a part of the estate sufficient to feed her (this part was called “oprich” - “except”). If the children of the deceased (deceased) nobleman didn’t get into combat by the 15 years, the estate was taken in favor of the state. True, it did not stop everyone. Those who did not want to serve could enroll in other classes - merchants or even peasants. There were even cases of falling nobles in the serfs. Thus, in pre-Petrine times, decrees were issued forbidding nobles to go to slaves.

Unfortunately, with other rulers, this system began to collapse. After the death of Peter Alekseevich, the nobles began to receive one privilege after another. In 1736, Anna Ioannovna limited their service to 25 for years. In 1746, Elizabeth forbade all classes, except the nobles, to buy land and peasants. Peter III in general freed the nobility from compulsory service - the “Manifesto on the Freedom of the Nobility” from February 18 of the year 1762. Catherine II will confirm this manifesto and further expand the rights of the nobility. At the same time, the nobility fully retained their former privileges and constantly increased their number. The nobility turned into a closed privileged caste. They could even leave Russia and live most of their lives in Western Europe. Moreover, they got the right to enter the foreign service. From now on, for a significant part of the Russian “elite”, France, England, Italy and Germany will become much more interesting and nicer than “this” Russia. They will squander huge amounts of money in European cities, which will be pumped out of the peasantry, Russia. In fact, part of the nobility will be overt parasites.

Under the dominance of Western culture, when German became the native language for the nobles, then French and English, a huge gulf appeared between the nobles and the peasantry. In the Russian Empire, they created an “alien people”, a foreign body in the Russian people. The first reaction of the people to this injustice was the peasant war of Pugachev. Subsequently, the controversy was not resolved and served as one of the most important prerequisites for the 1917 Revolution of the Year.

It should be noted that the obscene Paul, who was spat upon, turned into a fool, was well aware of this problem. It was the sovereign-knight who tried to restore justice, return to the correct system, discipline the nobility, and facilitate the existence of the peasantry. However, his attempt to regain the ideals of chivalry, restoring the true meaning of the existence of the nobility and the challenge of Britain, led to a conspiracy. The traitors-nobles, with the organizational support of the British, killed the Russian tsar. And then blackened his name by creating an image of a jester on the throne.

The destruction of the system introduced by Peter gradually led to a weakening of Russia's military might, especially for the generals. Careerists, performers, sons of aristocrats and generals began to become generals. “Militancy” began to leave the army - decisiveness and initiative. Many “peacetime” generals appeared who served well in peacetime, but could not lead the troops to victory during the war. The result was deplorable - defeat in the Eastern War, numerous mistakes and unnecessary casualties in the 1877-1878 campaign, defeat from Japan and the catastrophe of the First World War and the 1917 Revolution of the year.

It should be noted that during the Eastern (Crimean) War, the Russian-Turkish war 1877-1878. and World War I, Russian troops fought best on the Caucasian front. In the Caucasus, Russian troops were in constant readiness, at any time could start a war with the Turks, mountaineers or Persians. There was no place for servicemen and careerists, in the Caucasus there were real combat officers.

Ctrl Enter
Noticed oshЫbku Highlight text and press. Ctrl + Enter
We are
Nobles of the Russian Empire - the backbone of the officers of the Red Army or On another liberal lie26 February 1714 Propulsion Peter I issued a decree prohibiting assigning officer ranks to nobles who did not serve as soldiers
Military Reviewin Yandex News
Military Reviewin Google News
76 comments
Information
Dear reader, to leave comments on the publication, you must sign in.