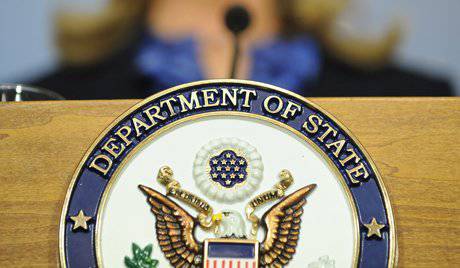 The material on the US Department of State website "Vladimir Putin's fiction: 10 of false statements about Ukraine" is nothing more than "emotional provocation" by the states. Nevertheless, it is extremely doubtful that such antics of Washington would achieve their goal - even Europe gradually realizes the logical behavior of Putin in the Ukrainian question. All that is required of the Russian leadership now is not to pay attention to such American “tricks,” experts say Alexey Martynov and Pavel Svyatenkov, “Vladimir Putin’s Fiction” - the statement by the US Department of State, which gives 10 supposedly false statements by the Russian leader, came out like that. about the situation in Ukraine. The American authorities, in particular, refuse to recognize the current government of the country as illegitimate, do not recognize the humanitarian crisis, and prefer not to notice the flow of refugees and the facts of attacks on churches and synagogues in southern and eastern Ukraine.

Alexey Martynov, Director of the International Institute of the Newest States, told Golos Rossii how Russia should relate to such behavior in the West.

- How do you comment on these "10 myths", which, according to the White House, have no basis?

- I read the article - there is even nothing to comment on. This article is clearly propaganda. If it were published, for example, on the site of a famous publication that is involved in the information war, one could still find some logic in it. But when such materials are published on the US Department of State website, an attentive reader is only perplexed. There is an attempt to personally insult the president of Russia. I think this is counterproductive and, moreover, unacceptable.

- It is puzzling that the facts that are confirmed are directly denied. For example, the information that the Russian-speaking population of Ukraine is being persecuted. It either closes its eyes, or it is directly refuted.

- Of course. Here the meaning is not in the search for truth. This is a clear agitation, and in the tone of the Cold War. But as a reader, I am asked questions, what do these people want to achieve when the US Department of State, that is, the US Department of Foreign Affairs becomes the author of the information war? Who is the object of this new "cold war" that they want to unleash, taking advantage of the occasion or the situation that they also inspired in Ukraine? These questions are worth considering.

- Who, from your point of view, can be the target audience of this material? After all, a person who more or less follows events is so easy to refute one or other myths. If, for example, talking about refugees, this is also a fact, even though the United States does not recognize it.

- I am convinced that, first of all, the target audience is not limited to listeners or readers in Ukraine or a certain part of Russian or American society. I think that the main target audience is the whole world. All people in the world who are interested in and understand such issues, who are professionally involved in these procedures, understand perfectly what is happening in Ukraine.

The meaning of this message is that America is not worried about Putin’s opinion and, he says, do not listen to what he says, because we will do what we want. This is a kind of declaration of war. Frankly, this is a provocation of emotional reaction, primarily personal from Vladimir Putin as president of Russia, as well as from the Russian state, insulted in the person of its president.

I am sure that Russia will not be “led” to such provocations. By going this way, the Americans will lose. They touched on such things that were not worth affecting, they are trying to play on some deep-seated contradictions (Ukrainian nationalism). There are internal understatements within the family of the Slavic peoples. The United States cannot imagine and does not fully understand the meaning of our common millennial stories.

People who do not have their own thousand-year history cannot think in such categories and evaluate what is happening around them. We and Ukrainians can. I am more than confident that the public, expert Russian-Ukrainian dialogue will definitely be restored, despite the fact that the Americans managed to embroil us.

There is a second component in this article - a kind of signal to Europe: Europeans, do not listen to Putin. And Europe Putin heard and thought. Now we see the reverse process. Europe says, it can be seen in many leading mass media that Putin is right: let's say, we will help establish the Ukrainian state so that the wishes and aspirations of all people, all national, social and regional groups are taken into account. “Let's help return Ukraine a legitimate field,” says Europe with Putin’s words. I am sure that in the case of Europe the United States will not achieve its goal.

- What should be the reaction of the Russian side from your point of view to such a provocation?

- The best reaction in such a situation is the absence of any reaction. You just need not notice what happened. If someone in the West continues to urge, we have the appropriate structures, in particular the Ministry of Foreign Affairs. I think that the Foreign Ministry can quite adequately respond to the US State Department in the spirit of Andrei Andreyevich Gromyko.

- How can you comment on these statements of the US State Department?

- Naturally, there is a diplomatic struggle, a struggle of rhetoric. I do not think that the number of refugees is huge. But it is clear that if the company starts total de-Russification in the south-east of Ukraine, then the refugees will definitely be. Russia in this case also acts as a warning to a similar situation. The United States says that there is nothing supposedly. But in fact, there is a problem.

- It is possible that there is an influx of people willing to move from Ukraine to Russia, but so far it is not very large. However, the fact is that if it comes to a serious civil confrontation in Ukraine, it will increase.

- In addition, the US State Department refuses to recognize the facts of an attack on a church or a synagogue. Nevertheless, the Russian side has evidence.

- If there is evidence, they need to be made public more widely. It is known that there were calls to start seizing the temples of the Ukrainian Orthodox Church of the Moscow Patriarchate. These calls were not implemented. New Ukrainian authorities do not seek to interfere in church affairs. Nevertheless, they almost immediately went to the abolition of the law, which gives the Russian language the status of a regional one.

The church question for the Ukrainian authorities is not very significant yet, the language predominates, while the illegitimate authorities were not afraid to go into conflict, were not afraid of the threat of civil confrontation. It is clear that the abolition of this law is a program step. Everyone knows that when a new leadership comes to power, the first steps it takes are symbols of what will be done in the future. The American president tried to turn his first decrees into some symbolic acts.

- For some minor flaws, from the point of view of the West, you can close your eyes in this situation?

- Depends on which side to take. The same event can be served either as an accidental excess, which does not allow talking about the general picture, or as a terrible crime, which testifies to the fact that, say, the Ukrainian government needs to be overthrown. Since the West believes that everything that happened in Kiev is a plus for him, he idealizes the current Kiev leadership. Although it is clear that Yanukovych was overthrown, and no one particularly hides.

Ctrl Enter
Noticed oshЫbku Highlight text and press. Ctrl + Enter
We are
Pavel Svyatenkov: “Ukraine is experiencing a“ state heart attack ”disguised as a revolution”Religious conflict in Abkhazia? It is possible
Military Reviewin Yandex News
Military Reviewin Google News
32 comments
Information
Dear reader, to leave comments on the publication, you must sign in.