Where is the Russian help. What is the independence of Ukraine and how to win it 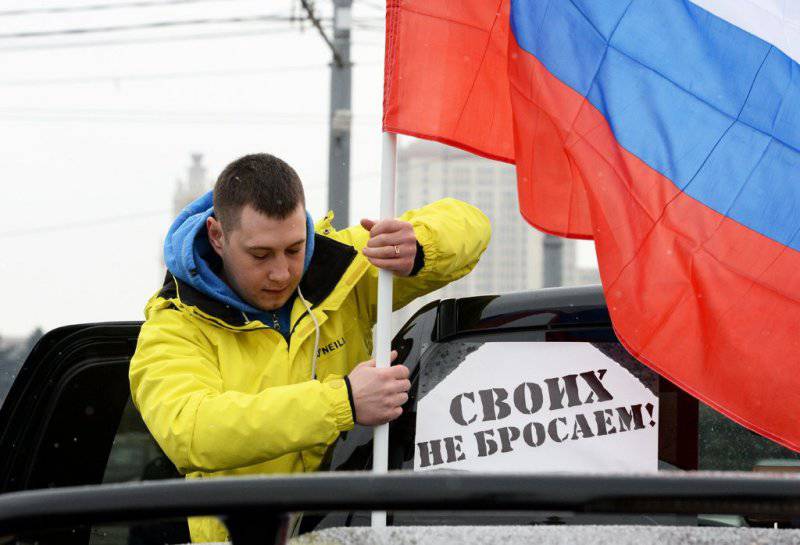 Now, from Ukraine, many people write that they came out on the square and asked for help from Russia, but the Red Army is not visible, and there are more and more bad guys with bats. Where is help, where is Russia?

Well, let's first figure it out. Who asks for help? Protesters? Some of the protesters call Russia, and in the next square other protesters call NATO. Who do you want to count as people? The reality is that so far no region, except Crimea, has appealed for help - and, therefore, has not received it. Even Donetsk is not considered yet, although it has advanced the furthest.

No appeals were registered, because rallies are not self-governing. Why the buildings of regional councils pass from hand to hand, and people sit in them all the same? Any official who recognized the new Kiev government automatically becomes an accomplice to the insurgency. There is no difference between him and the militants in masks.

This axiom clearly demonstrated Odessa. Protesters cordoned off the administration building, seemingly achieved mutual understanding with deputies. As a result, the regional council adopted an appeal to the illegitimate Verkhovna Rada, condemned the introduction of any foreign troops into the territory of Ukraine and asked to give itself “sufficient authority to restore order”. In the light of the replacement of the top of the Odessa militia by a loyal junta, this sounds rather ominous. The people did not achieve anything, except for a handful of agreements on reports to voters and a referendum. During this time, the local Euromaidan managed to mobilize, bring up militants from the outside and arrange a number of counter-countering.

The result is logical. Despite all the compromises, the reinforced Euromaidan demanded the arrest of Anton Davidchenko, an extremely moderate activist, and in case of non-fulfillment of the ultimatum he promised to take over the functions of the police. The price of the referendum agreement is the same - having got stronger, this power will step over all the words. Moral: What progress can there be in negotiations with deputies supporting an armed insurgency? What should it look like?

In the regional administrations of Ukraine captured by the people, the word LIZLEN is acutely lacking. Either you recognized the Kiev revolt, or you remained a deputy. To ask the deputies who among them recognizes the current Kiev government is a matter of ten minutes. Nominations from the people for their vacant mandates are also short-lived.

This is the only completely legal behavior. Kiev junta illegitimate? Yes. Is President Yanukovych Legitim? Yes. If local authorities, against the will of the people, try to negotiate with armed rebels, does this give the people the right to overthrow them? Of course. Does the people have the right to choose the authorities that will express their position? This is generally the basis of the Constitution.

After that, real deputies adopt a resolution that the Kiev authorities do not recognize, they ask Crimea for help, and Yanukovych, whoever he is, is still their president. He, in turn, is happy to approve the national candidate for the peak of the junta, and Russia includes the region in the assistance program.

Time is running out. The head of the Donetsk Internal Affairs Directorate, Colonel Romanov, has already resigned from his post, as he promised to do if he is forced to use illegal methods to rally participants. Simply put, he received orders to shoot at people.

Romanov did not stain his uniform, only now there is still a coup in the country and the people who gave him the criminal order have not gone away. What are the guarantees that the post of Romanov will no longer be occupied by someone more compliant, as in Odessa? And what should his successor do, shoot him or put his ID on the table too? This staff turnover does not have a good end, as long as the local ATC submits to Kiev, not Donetsk. And the choice of ordinary police officers is exactly the same as that of the residents - either to submit and try to live with it, or take measures to be controlled by people who are not subject to Kiev.

Only when there is a legitimate government in the region, defended by militia sworn to the people, or at least by people on the barricades, and there is no longer any collaborationists in power, can we talk about anything. We must begin with this, and not with the referendum agreements. Only the people's power is able to provide a referendum, but so far there is neither its nor its defenders, nor the final understanding and determination to go to the end. And time is running out.

Now you can still defend yourself. Then it will be worse, and it’s not even about default, gas prices or the deadly conditions of the IMF loan, which Yatsenyuk accepted. Fuel at Ukrainian NPPs remained until the end of April. What is the point of filling the Rivne nuclear power plant, so that Sashko Bilyy would come to her with a gun and start blackmailing a half of the continent with a new Chernobyl? And who will pay for this fuel? Armed rebels do not sell nuclear materials.

Recall, 46% of Ukrainian electricity is produced at nuclear power plants, and the fuel for them is made only at TVEL and cannot be replaced. American Westinghouse has already tried to put its own rods two years ago, it ended in an accident. One thing is good, without electricity, Ukrainian television will shut up, which has already broken all records for stupid lies.

So this is not yet the leaders of the Resistance, and as soon as people really start to sit without light, heat and bread, they will immediately be there. Only in this case, the security forces have already abolished the additional payments, and the junta cannot pay the salaries, but the oligarchs give cash, and in two months the betrayal will cease to seem impossible to many people. The state employees left without pensions go to meetings of oligarchs.

Yes, this is not even a war, and we will win the skirmish with Nazism. There are enough resources, understanding is, experience obliges. We, unlike Europe, who has diligently forgotten everything, do not need to explain to what the “reforms” of the putschists lead and we don’t need to wait for the sweeps to give a brown infection. The question is only in time and price, which will have to pay for the liberation of Ukraine, and then, and the other now depends only on the determination of the Ukrainians themselves.

Ctrl Enter
Noticed oshЫbku Highlight text and press. Ctrl + Enter
We are
A great interview with Sergey Lavrov: about Ukraine, Obama and IranWhat you didn't want to know about England
Military Reviewin Yandex News
Military Reviewin Google News
206 comments
Information
Dear reader, to leave comments on the publication, you must sign in.